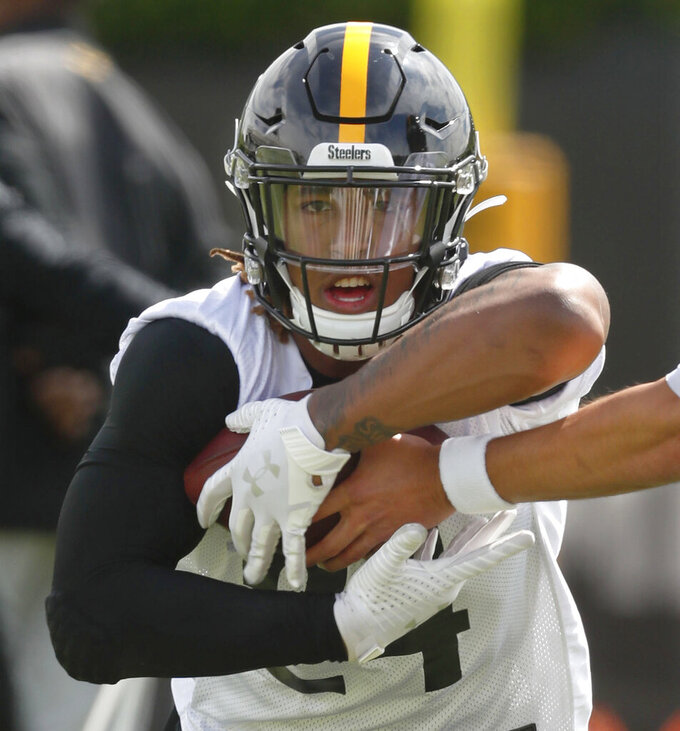 FILE - This May 21, 2019, file photo shows Pittsburgh Steelers rookie running back Benny Snell Jr. performing drills during an NFL football practice in Pittsburgh. Teammate James Conner is now entrenched as the starter entering his third season, but welcomes the chance to share the load with Jaylen Samuels and Snell. (AP Photo/Keith Srakocic, File) 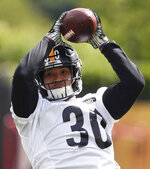 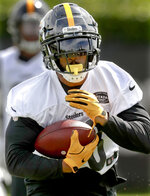 PITTSBURGH (AP) — The same words kept popping up as James Conner, Jaylen Samuels and Benny Snell Jr. talked. Words such as "we" and "us" and "relationships" and "my guys."

No personal agendas. No campaigning for more touches or playing time. No talk about contracts or specific roles. The Pittsburgh Steelers running backs just don't see the point of personal pronouns.

"We're trying to be the best running back group in the world," Samuels said.

One that's ready to escape Le'Veon Bell's shadow for good.

The versatile and dynamic three-time Pro Bowler's long goodbye ended in March when he signed a four-year, $52 million deal with the New York Jets. For Conner and Samuels, that means no more keeping one eye on the playbook and another on the door to the locker room waiting for Bell to step through.

He never did last fall, though that didn't stop the seemingly endless debate over his intentions and his future, discussions the teammates he left behind tried to avoid even as they combined to put up numbers that rivaled Bell's at the peak of his considerable powers.

"We didn't know what the situation with Le'Veon was going to be last year," Samuels said. "We just had to come to work every day like he was going to show up. Now that he's not here, we're going to do the same thing. Just going to push even harder because we know the pressure is on us. We've got to get the job done."

One they're focused on doing together.

While Conner made the Pro Bowl after running for 973 yards and a dozen touchdowns and adding 497 yards receiving, he also missed time at various points because of minor injuries. Samuels — a rookie fifth-round pick last fall — filled in capably, including a memorable performance in a victory over the New England Patriots in which he racked up 172 total yards.

Conner spent a portion of the winter bulking up in an effort to hold up better under the wear and tear of a 16-game season. His biceps and his shoulders look as if someone inserted a hose into them and just started puffing away, not stopping until his arms and neck appear to be bursting out from under his shoulder pads.

"I don't know what's going on with him," Samuels said with a laugh and a shake of his head.

Conner is reluctant to discuss specifics about how much weight he's added. He's also reticent to declare himself the starter. Entering his third year as a pro, he's become well-versed in how fast life can come at you in the NFL. He joined the Steelers as a third-round pick in 2017.

Sixteen months later he found himself lining up behind quarterback Ben Roethlisberger when Bell opted to work on his music and his tan rather than sign his franchise tag and show up for work.

Still, all those yards and all those touchdowns didn't stop Pittsburgh from taking Snell in the fourth round of the draft following a record-breaking career at Kentucky. Conner didn't take it personally. This is how things work.

"Coach (Mike Tomlin) told us a while ago that he's trying to replace us every year," Conner said. "Didn't mean that in a bad way. Doesn't mean we're not doing our job. It's just you know, there's always a young buck up and coming. You've seen the talent that Jaylen got. Seen the talent that Benny has. All those guys are talented, really good running backs."

Samuels excelled catching passes out of the backfield at North Carolina State — where he left as the school's all-time leader in receptions — and spent the offseason refining his route running.

The Steelers are looking for ways to have Conner and Samuels on the field at the same time, even if that means moving Samuels into more of an H-back role that would allow him the freedom to move around in search of favorable matchups.

"We've both got unique skillsets," Samuels said. "James can do a lot of running and I can do a lot of catching but we can also feed off each other. That was just Year One. Year Two we hope to build off that, exceed and make some noise."

They're not the only ones. Snell left Kentucky with a year of eligibility left after breaking every important rushing record in school history. He didn't panic when he didn't hear his name called until the third day of the draft. He knows how well the Steelers develop mid-round picks. The rise of Conner and Samuels offers tangible proof.

A bond they will lean on as the post-Le'Veon Bell era begins, one more focused on sharing the burden rather than hogging the ball or the limelight.