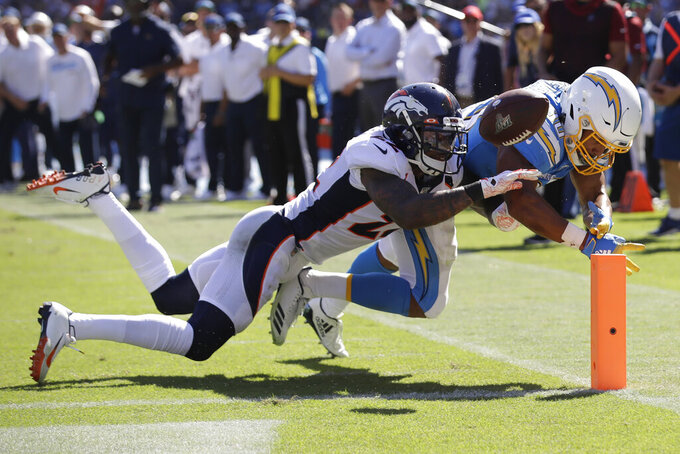 Denver Broncos defensive back Kareem Jackson, left, forces a fumble by Los Angeles Chargers running back Austin Ekeler at the goal line during the first half of an NFL football game Sunday, Oct. 6, 2019, in Carson, Calif. (AP Photo/Marcio Jose Sanchez)

CARSON, Calif. (AP) — Phillip Lindsay and the Denver Broncos got off to a slow start the first quarter of the season, but they were finally able to break through on Sunday.

The Pro Bowl running back got his first 100-yard game of the season and the Broncos got their first win under Vic Fangio by defeating the Los Angeles Chargers 20-13.

Lindsay rushed for 114 yards on 15 carries as Denver (1-4) raced to a 17-0 lead in the second quarter and held on for the 500th victory in franchise history.

"We have a lot of playmakers. Today was my day to get hot and spark the team," Lindsay said.

The Broncos' defense, which did not force a takeaway in their first four games, came up big by forcing three turnovers and holding the Chargers without an offensive touchdown for the first time in 56 games. Two of the takeaways came inside the Denver 5.

"We hammered them for our performance last week (a 24-22 loss to Jacksonville) but you've got to give them their due this week. They played their butts off," Fangio said. "They really played well and deserve a big pat on the back."

Lindsay came in averaging only 3.9 yards per carry and had only one run of 10 yards or more. He averaged 7.6 against the Chargers and had five carries over 10 yards.

His first two carries on Denver's opening drive went for 21 and 12 yards. Three plays later, he scored on a 4-yard run up the middle to snap a string of 13 straight games where the Broncos went without a TD on their first possession.

Denver scored the first 17 points, but the Chargers started to gain momentum and got within 17-10 midway through the fourth quarter. The Broncos had three three-and-outs, an interception and missed field goal during the second half before Lindsay was able to help them ice the game late in the fourth quarter with runs of 32 and 13 yards on a drive that ended with Brandon McManus' second field goal — a 46-yarder — to make it 20-10 with 1:55 remaining.

"For the past couple weeks, we either got behind or we were having to play catch-up and not establish the run like we wanted to," Lindsay said. "When you are able to run the ball, you command the game. We wanted to seal the deal running the ball at the end of the game."

Chase McLaughlin's second field goal with 15 seconds left brought LA back within a touchdown, but Denver recovered the onside kick to put it away.

Joe Flacco was 14 of 20 for 162 yards, including a 70-yard touchdown pass to Courtland Sutton in the first quarter to make it 14-0. Sutton caught the ball at the Chargers 45, slipped out of an attempted tackle by Rayshawn Jenkins and then eluded a diving Roderic Teamer for this third touchdown in the past two games.

"We kind of creased a couple runs early and made the big play to Sutton. We had them on their heels a little bit," Flacco said. "I think they did change some things a little in the back end and started playing some more quarters. We let them get some momentum, and they played the run game a little better at times."

Philip Rivers was 32 of 48 for 211 yards with two interceptions. Melvin Gordon was held to 31 yards rushing in his first game back after a holdout. Fellow running back Austin Ekeler had 15 receptions for 86 yards.

Coach Anthony Lynn showed some frustration for one of the few times during this three-year tenure when he opened his postgame news conference by saying: "Sorry to keep you good people waiting, and sorry for watching that damn game. We play like that, we won't beat anybody."

What drew Lynn's ire the most was the no scores twice in the red zone. On the last play of the first half, Ekeler was stopped at the Broncos 1 by Kareem Jackson and fumbled as he tried to reach the goal line.

The end zone woes continued in the third quarter. Kyzir White's interception of Flacco gave the Chargers the ball at the Denver 7, but Rivers tried to throw it into double coverage and was picked off by Alexander Johnson in the end zone on third-and-goal from the 2.

"We just didn't capitalize and finish, and we turned the ball over," Rivers said. "It just wasn't going to be one of those 350-yard days where we were going to go up and down the field. I think I'm going to look at it and go, 'Gosh.'"

The Chargers finally got on the board with 31 seconds remaining in the third quarter when Desmond King returned a punt 68 yards . It is the second punt return TD in his career, the eighth player in franchise history with multiple scores.

Gordon had 38 scrimmage yards in his first game back after a 64-day holdout. The Chargers got him involved quickly with a 4-yard screen pass on their first play. Gordon reported back on Sept. 26 and was activated prior to last week's game at Miami but did not play.

"Physically, I was good. You just have to get used to running, guys hitting you and stiff-arming. It's just so different," Gordon said.

The Chargers came in averaging 103.5 rushing yards, but were held to 35. The Broncos allowed 225 yards to Jacksonville's Leonard Fournette a week ago and had the third-worst run defense.

Broncos: CB De'Vante Bausby was strapped to a backboard and taken off the field on a cart during the second quarter. He was injured when he collided with Johnson while making a tackle on Ekeler. Bausby was taken to a hospital and was reported to have movement in his arms and legs. ... LB Justin Hollins suffered a knee injury during the second half.

Chargers: C Mike Pouncey suffered a neck injury during the first half and did not return.

By Cliff Brunt 57 minutes ago
By Juan A. Lozano an hour ago
5 hrs ago
By Arnie Stapleton 13 hrs ago
22 hrs ago