Lindstrom: Falcons' O-line must 'do better' to protect Ryan 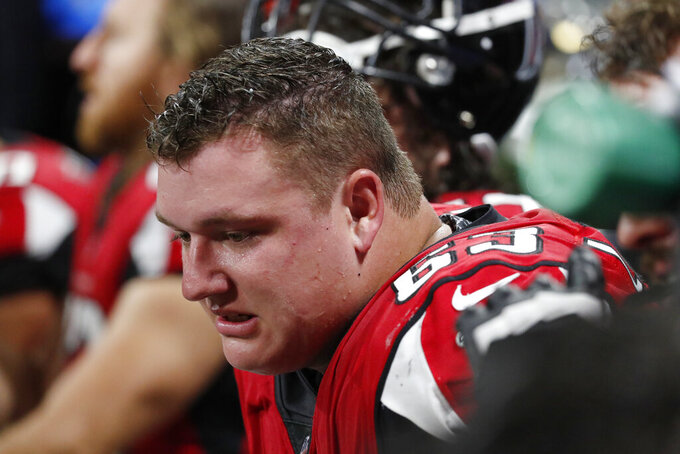 FILE - In this Aug. 15, 2019 file photo, Atlanta Falcons offensive guard Chris Lindstrom (63) sits on the bench during the first half an NFL preseason football game against the New York Jets in Atlanta. After being limited by a foot injury to only five games in his rookie season, Lindstrom is being counted on to be a fixture at right guard and provide better protection for quarterback Matt Ryan in 2020. (AP Photo/John Bazemore, File)

ATLANTA (AP) — Chris Lindstrom had to spend far too much of his rookie season imagining how he would prepare for a game.

The Atlanta Falcons' right guard is more than ready for a full season of reality.

Lindstrom, the No. 14 overall pick in the 2019 NFL draft by Atlanta, broke his right foot in the Falcons' opening game at Minnesota. He missed the next 11 games.

“The whole time I was injured, I was preparing like I was playing the game every single week,” Lindstrom said Saturday. “I’d write down notes. This is what I want to do against this guy.”

It was a lost season for Lindstrom and the Falcons, who finished 7-9 despite closing the year with four consecutive wins after the rookie returned from the injury.

Lindstrom is eager to take advantage of the crucial experience gained in those four games as he prepares for his second season. He's had more time to develop chemistry with right tackle Kaleb McGary, another first-round pick last year.

The Falcons expect Lindstrom and McGary to provide long-term stability on the right side of the line. The team desperately needs improved play from the line.

Last year's line never achieved the continuity that had been planned. Matt Ryan was sacked a career-high 48 times and missed a game for the first time since 2009 due to an ankle injury on one of the sacks.

The run-blocking also was a problem. The Falcons finished ahead of only two teams in rushing. The line must provide better protection for Ryan and better running lanes for their new lead rusher, Todd Gurley.

“We know we need to do better as a unit and we’re being accountable for that and working toward it,” Lindstrom said.

The competition at left guard that could also include James Carpenter, Matt Gono and others. Coach Dan Quinn expects to see Lindstrom and McGary provide more consistent production on the right side of the line.

“No. 1, usually that’s when you see a big push in terms of where a player can go to from rookie year into second year,” Quinn said Wednesday. “Often, that’s the case with linemen — both offensive and defensive linemen. Physically, both are doing well.”

“The fact he was able to get back out there and feel his foot out and get the chance to get back after it the way he does,” Jones said. “He’s fast, he’s physical. He always wants to be perfect. He’s always looking for edges in his game. With Kaleb, they’ve been growing together and figuring it out together and they’ve been awesome.”

NOTES: FB Keith Smith was activated from the team’s reserve/COVID-19 list. ... Rookie CB A.J. Terrell, the first-round pick from Clemson, provided the highlight of Saturday's practice when he soared to intercept a pass from Ryan intended for Calvin Ridley. Jones said Terrell “made a great play. That was awesome to see.”