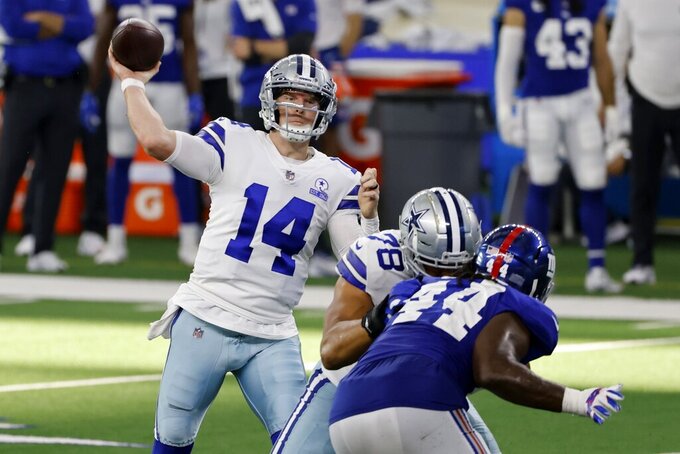 EAST RUTHERFORD, N.J. (AP) — After patiently waiting for a quarter of the season, Markus Golden is finally getting a chance to play a lot in Pat Graham's defense with the New York Giants.

Golden, who led the Giants with 10 sacks last year, seemingly got lost in the change of leadership and free agency after last season.

Golden was not signed as a free agent and the Giants eventually re-signed him after training camp started. He was playing roughly 17 snaps a game until last weekend.

After strongside linebacker Lorenzo Carter sustained a season-ending Achilles injury, Golden became a fixture on the defense. He was on the field for 57 snaps and he probably will have at least that many Sunday when the Giants (0-5) play host to Washington (1-4) at MetLife Stadium.

The Giants are actually down two starting outside linebackers. Oshane Ximines is on injured reserve with a shoulder problem after a loss to the Rams the week before.

Golden will definitely pick up Carter's role as a pass rusher.

The six-year veteran said he never felt the Giants were not treating him fairly.

“I try not to take stuff personally,” Golden said after practice on Thursday. “I’ve been like that for a long time, a long time. Don’t take it personally. Come in, work hard every day no matter what. Make sure that I’m being the same person no matter what, and that’s what I focus on the most. Make sure I’m being myself. If I’m worried about other stuff and not working as hard as I can because of other stuff that’s going on, then I’m not being myself.”

Graham, who was hired to run the defense by Joe Judge, said Golden has been the same since they first met. He told the 29-year-old recently his playing time would increase, saying he might have needed a little more time to get comfortable with the new defensive system and terminology.

“He’s done everything we’ve asked him to do," Graham said. “He’s worked his tail off to get the stuff down that we’re asking him to do. You see some of the production coming. The half sack last week, the play on the back side of the run against the Rams. You starting to see, ‘OK, here we go.’”

Graham said he has never seen Golden frustrated by his lack of playing time, and he believes he is always ready to play.

“You guys have met him,” Graham said. “I know you can’t meet anybody now, but when he gives you that look that he’s ready to go, he’s looking through your soul, I like that. That let’s me know we have a defensive player. Let’s roll now, we have to get rolling for this week. We need that.”

Golden insists he is more than a pass rusher, saying he has played every role needed for a linebacker.

NOTES: S Jabrill Peppers (ankle), WR Darius Slayton (foot), LB Kyler Fackrell (ankle) and DL Dexter Lawrence (knee) were all limited at practice Thursday. ... Giants offensive coordinator Jason Garrett, who coached the Dallas Cowboys for the past 10 years, said it was hard seeing Cowboys quarterback Dak Prescott break an ankle last weekend. “One thing I know about him, he’s as tough as they come,” Garrett said. “His mentally tough, he’s physically tough. Surgery seemed to have gone well. Our communication over the last few days have been positive, it seems like he is in good spirits. Wish him nothing but the best, he’s a special guy.”