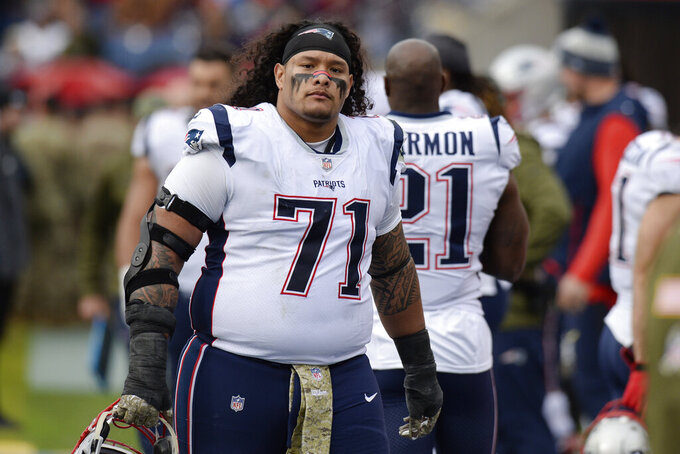 FILE - In this Nov. 11, 2018, file photo, New England Patriots defensive tackle Danny Shelton watches from the sideline in the second half of an NFL football game against the Tennessee Titans in Nashville, Tenn. he Detroit Lions have agreed to a two-year, $8 million deal with defensive tackle Danny Shelton. Agent Drew Rosenhaus confirmed the deal Wednesday, March 18, 2020. (AP Photo/Mark Zaleski, Fle)

DETROIT (AP) — Add a couple more names to the parade of ex-Patriots joining the Detroit Lions.

And one of the top players on Detroit's current roster is apparently ready to leave.

The Patriots also agreed to trade safety Duron Harmon to the Lions. Both teams announced the deal, but did not announce additional terms. The trade is pending a physical.

ESPN, citing an unidentified source, reported Wednesday night that cornerback Desmond Trufant was signing a two-year deal with the Lions. Darius Slay, who is currently Detroit's top player at that position, tweeted the following in response to that reported deal:

“Congrats to my guy!!!! Hope that speeds up my trade process!!”

It would not be a surprise if Slay were dealt, but that activity on his twitter account added more drama to Detroit's offseason.

Detroit general manager Bob Quinn also has New England ties, and it has been common for the Lions to add former Patriots to their roster in recent years.

Last season, Detroit added several other players who had previously been with the Patriots, including defensive end Trey Flowers, receiver Danny Amendola and defensive back Justin Coleman.

Shelton had three sacks and a forced fumble last season. He has played five NFL seasons — three with Cleveland and two with the Patriots. He was a first-round draft pick by the Browns in 2015.

Trufant's first seven NFL seasons were with the Atlanta Falcons. He had four interceptions in nine games last season. He missed time with a broken forearm.