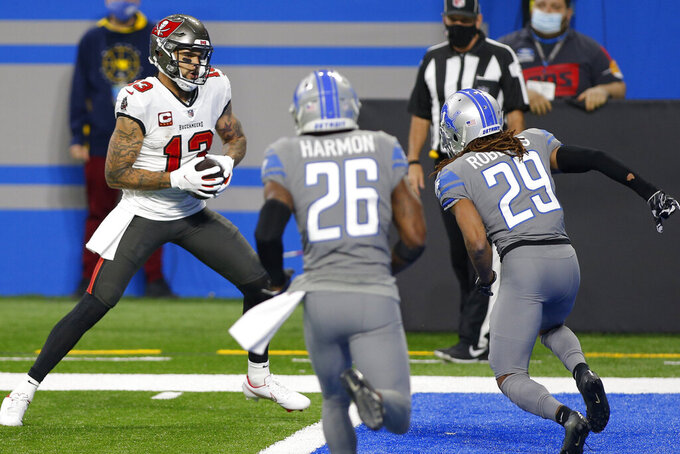 DETROIT (AP) — When a team loses 47-7, it is difficult to pick out one play that could have changed things.

The Detroit Lions, though, can at least consider it.

On the Tampa Bay Buccaneers' first possession, they faced third-and-9 from their 19. Linebacker Jahlani Tavai sacked Tom Brady for a 6-yard loss, but Everson Griffen was offside on the play.

Given a second chance, Brady converted the first down with a pass to Chris Godwin, then put the Buccaneers ahead with a 33-yard pass to Rob Gronkowski.

Detroit with Robert Prince handling coaching duties after interim head coach Darrell Bevell was sidelined by COVID-19 protocols, lost quarterback Matthew Stafford to a lower-leg injury on the first series of the game.

Chase Daniel completed 13 of 18 passes, but for only 86 yards and never got the Lions past midfield.

“We were 1 of 10 on third down, which means we weren't staying on the field,” Daniel said. “When that happens, you are putting your defense in a very tough spot, and it is even worse when you are facing Tom Brady.”

Twenty-three years after backing Brian Griese on the University of Michigan's 1997 national championship team, Brady didn't show any signs of age. He completed 22 of 27 passes for 348 yards and four touchdowns in the first half as the Buccaneers took a 34-0 lead.

“I'm not going to blame the defense for all of this — this is a team game and we fell short on both sides of the ball,” Prince said. “The offense couldn't stay on the field and the defense wasn't able to get the kind of stops we needed to beat a very good football team.”

Tampa Bay rested Brady in the second half, but Blaine Gabbert only needed 10 seconds to make it 40-0. After a touchback on the kickoff to start the half, Lions running back D'Andre Swift fumbled on first down. The Buccaneers recovered the ball on the Detroit 25 and Gabbert hit Gronkowski on the next play for his second TD of the game.

Detroit's only points came on Jamal Agnew's 74-yard punt return in the third quarter, but the Buccaneers only needed four plays to make it 47-7 on a franchise-record sixth touchdown pass of the game.

“It's been frustrating, because we've been looking for a play like that all season, and when we finally get one, it comes when the score is 40-0," Agnew said.

David Blough, the third Lions quarterback of the game, did get the offense into Tampa Bay territory early in the fourth quarter, but the drive ended with a punt from the Buccaneers 40.

“It was a crazy week with the coaches and it is obviously tough to lose Matthew after one drive, but that's why Chase and I are here,” Blough said. “No one feels sorry for us. It is our job to go into the game and execute and we didn't do that.”

“I've been in a few games like this," Blough said. “We (Purdue) played Auburn in the Music City Bowl in the last game of my senior year and got beat 63-14. That wasn't much fun.”

The Lions allowed 588 yards, the second-highest total in team history and the highest in a regulation game. In 1990, the Lions gave up 566 yards in a 43-23 home loss to the Kansas City Chiefs, then allowed 676 in a 41-38 overtime loss to Washington three weeks later.

Those, though, were the only times the Lions allowed 40 points in a 6-10 season. This year, they've given up that many five times and are averaging a league-worst 32.1 points allowed per game.

“This just isn't good enough,” Prince said. “We had our team, they had their team and they beat us up.”