Lions' Cabinda getting comfortable back in the backfield 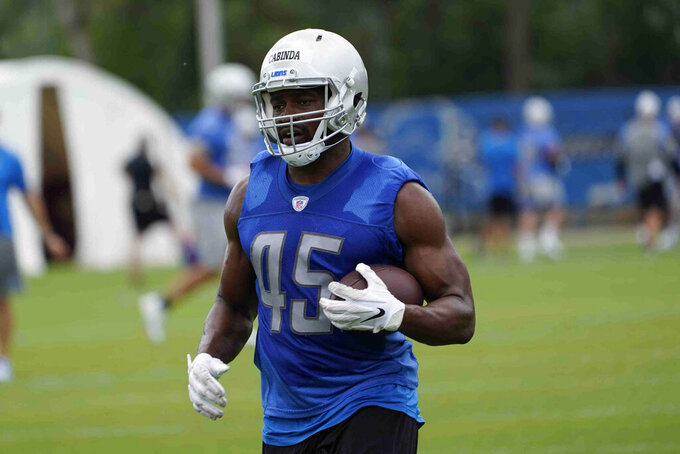 The Detroit Lions fullback was a middle linebacker at Penn State, ranking ninth in career tackles with 286 at Linebacker U., but never played defense as a star tailback at Hunterdon Central Regional in Flemington, New Jersey.

“Most people don’t know that about me,” Cabinda said while walking away after Tuesday morning’s post-practice interview session. “They just remember me from Penn State and that I played defense.

“So, right now, football has come full circle for me, being back in the backfield.”

Cabinda made the Oakland Raiders as an undrafted rookie in 2018 and contributed 21 tackles. However, he was cut the next year in a meeting that aired on HBO’s “Hard Knocks” before quickly signing to Detroit’s practice squad.

He was activated by the Lions late in 2019, getting into one game at fullback, and the direction of his career changed. Cabinda played sparingly at fullback in 2020, but showed enough for new Lions coach Dan Campbell to quickly take notice.

“I’ve been intrigued by Cabinda since the spring,” Campbell said. “There’s something about him. We knew he was a little raw because he made that transition last year, but there is something to him. I think he’s kind of a hybrid.”

Campbell values that Cabinda, who's 6-foot-1 and 240 pounds, can play fullback, tailback and H-back while also excelling on special teams.

He was once accustomed to running with the ball, rushing for 1,258 yards and 17 touchdowns in eight games as a high school senior. But he now instead opens holes for tailbacks. Cabinda had the key block on Kerryon Johnson’s 1-yard touchdown run last year at Green Bay.

“There is nothing better than having that lead block and being able to make those holes and put those guys in a position to be successful,” he said.

Cabinda is taping a documentary that he plans to release later this month on YouTube.

“It’s really an introspective look into an NFL player’s life and what it really takes," Cabinda said. "A lot of people think we just show up on Sunday and play, and don’t understand the way we’re working, how guys are rehabbing, and what it takes on a daily basis.”

Cabinda was an economics major at Penn State, and had an Instagram post last month detailing an NFL business symposium he attended in Las Vegas.

“I always thought I was going to go work on Wall Street one day,” he said with a smile. “But I’m actually a lot more into broadcasting now. That’s where I’m going to go when I’m done.”

He covered the Super Bowl two years ago as on-camera talent for the NFLPA.

“That was an awesome experience,” Cabinda said. “I got to go on radio row and interview guys while also being interviewed.”

But, for now, he’s focusing on being the kind of player Campbell said he would choose to start a fight to spark practice.

“Oh, man,” said Cabinda, shaking his head and smiling. “I don’t want anybody to take me as the bad guy. Who you see up here is definitely different than who you see on the football field. I’m very aggressive. I’m very physical. I’ve got a screw loose.”

NOTES: Rookie RB Jermar Jefferson was held out of practice Tuesday with an ankle injury suffered Monday. ... DE Kevin Strong walked off the field with an athletic trainer shortly before practice ended. ... WR/returner Kalif Raymond continued to impress by making plays. “He embodies everything we’re about," Campbell said. "He’s competitive as hell.”