Lions closing out another disappointing season 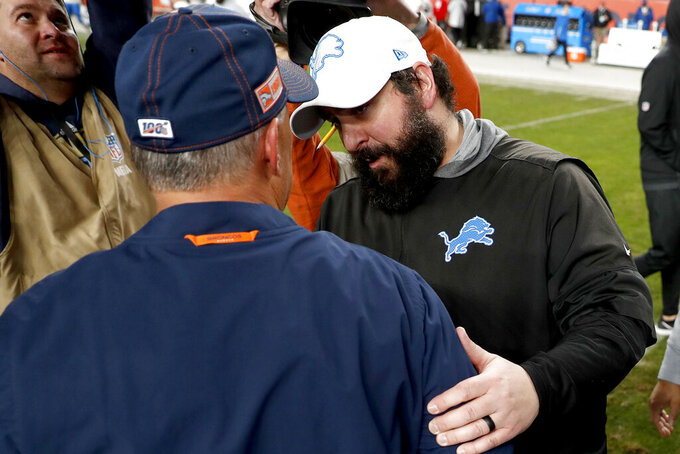 DENVER (AP) — A season that started with promise is winding down to another frustrating finish for the Detroit Lions. A 27-17 loss at Denver on Sunday was Detroit's eighth straight after a 2-0-1 start to 2019.

The Lions hoped to be playing for playoff positioning with a game remaining but all that's left to decide is where they will pick next spring. They are 3-11-1 and, if things remain the same after next week, will have the third selection in the 2020 NFL draft with a home game left against the Green Bay Packers, a team fighting for playoff seeding.

"It's frustrating but that's just part of this game," defensive end Trey Flowers said. "You sacrifice, you work hard, sometimes it don't go your way. Unfortunately a lot of times it didn't go our way this year but it's just like that tree — you've got to keep swinging until it comes down."

Flowers knows the highs of this game; he played in three straight Super Bowls with New England, winning two, before joining his former defensive coordinator in Detroit this year. But Matt Patricia hasn't been able to duplicate the success of the Patriots as head coach in the Motor City, going 9-21-1 with one game left in his second season.

Injuries have played a big part. Quarterback Matthew Stafford played in just eight games before a back and hip injury sidelined him at midseason. Running back Kerryon Johnson, out since Week 7 with torn meniscus in his right knee, returned against the Broncos but managed just 42 yards rushing on 10 carries.

Inside linebacker Jahlani Tavai went down with a shoulder injury Sunday and is done for the season.

Adding to the frustration in losing 11 of 12 is seven of those have been by a touchdown or less. The last three, however, have been by a combined score of 84-41.

"We talk about it every week. That's what these games come down to — three points, seven points here, four-point plays in the red zone," said quarterback David Blough, who was 12-for-24 passing for 117 yards and a touchdown Sunday. "We've got to execute better in the situations. The first 12 weeks or so were coming down to one possession."

Against the Broncos, who at 6-9 are also playing out the season, Detroit led 10-0 after Jamal Agnew's 64-yard punt return and 17-13 heading into the fourth quarter. Two long touchdown drives by Denver wore down the defense and put away the game.

The Lions have one more chance to get a win, and it comes against the team that beat them by a point in Week 5.

"We have to take some pride and get this win," Agnew said. "There really isn't anything else to it, we just have to win."