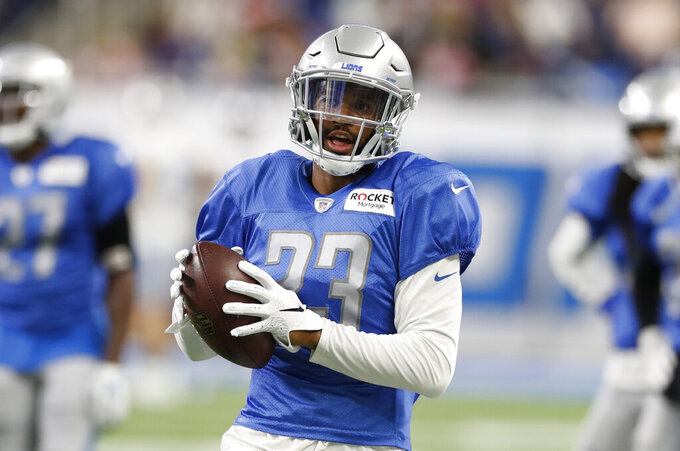 DETROIT (AP) — After a public practice at Ford Field, Detroit cornerback Darius Slay offered his assessment of the defense.

His area of emphasis was telling.

The Lions enter the 2019 season with room for improvement across the board, and one stat that definitely could use a boost is takeaways. Detroit had only 14 last season, the second fewest in the NFL. That contributed to a minus-5 turnover differential and a 6-10 record.

The Lions have the potential to be better. Slay is an accomplished cornerback, and Detroit made significant additions on the defensive line that could lead to more pressure and more mistakes by opposing quarterbacks.

"We improve the turnovers, we increase the chances of (quarterback Matthew) Stafford scoring, and the offense scoring more," Slay said.

Just two seasons ago, the Lions ranked third in the league with 32 takeaways. Slay tied for the NFL lead that year with eight interceptions, earning All-Pro honors. He had only three last season, and the rest of the team added only four.

"It's a big point of emphasis for us," coach Matt Patricia said recently. "Attacking the ball, things like that, we work really hard at that stuff. We did last year, we're doing it this year. We try to change up the drills and maybe look at some of the different way that teams are losing the ball through the course of the season last year."

Patricia said defenders now use different techniques to try to force turnovers. He also said a stop on the third down is similar to a turnover. Detroit held opponents to a 37.1% success rate on third down last year. The Lions' defense ranked 11th in that department.

The Lions signed safety Andrew Adams in the offseason. He was not a regular starter last season for Tampa Bay, but he still picked off four passes. Adams intercepted a pass in a scrimmage that was part of Detroit's Ford Field practice Friday night.

Slay was on hand Friday as well, taken off the active/non-football-injury list earlier in the day — although he spent much of his time on the sideline observing.

"It's just good to have him get out and do some drills and things like that and be able to see him," Patricia said before practice. "We certainly are going to do everything we can to have him out there as much as we can, but also be smart about the entire situation because we know it's a long year."

Although the Lions didn't force many turnovers last season, they did finish in the top 10 in total defense, and their 43 sacks matched their highest total in the last eight years.

Then Detroit tried to upgrade its defensive line even further. The Lions signed Trey Flowers, who had 7½ sacks a season ago with New England. Then they picked up Mike Daniels late last month after he was cut by Green Bay.

The hope is that at some point, all that pressure on the quarterback will lead to more takeaways for the defense.

"Once everybody's healthy, it's going to be scary to see what they can do. From a back end standpoint, that's exactly what you want," Adams said. "We're all licking our chops."