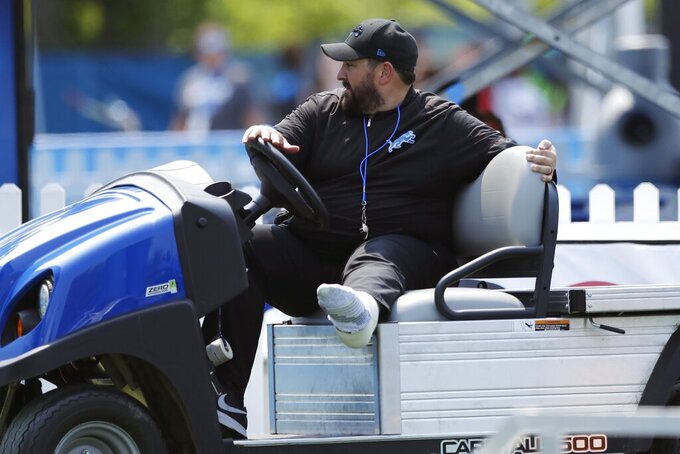 Detroit Lions coach Matt Patricia drives a cart during training camp at the Lions NFL football practice facility, Thursday, July 25, 2019, in Allen Park, Mich. Patricia is beginning his second training camp with a cast on his left leg after being treated for a tendon problem in his lower leg. (AP Photo/Carlos Osorio) 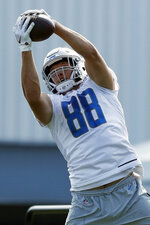 ALLEN PARK, Mich. (AP) — Matt Patricia took a hands-on approach during his debut season as an NFL head coach, getting close enough to the Detroit Lions during practices that they could easily hear him and see him demonstrate proper fundamentals and techniques.

To get his point across at least early in his second training camp, Patricia may have to shout from a cart. And, he may not be able to stand up much.

Patricia arrived at his season-opening news conference on a knee scooter and later roamed fields on a cart, elevating his surgically repaired left leg, during the team's first practice Thursday.

"I'm a little bit caught 10, 15 yards further away from the action," he said. "I'm a coach that likes to be in the middle of it. I enjoy the teaching process of the game."

Patricia had surgery during the offseason to address issues with a tendon, muscle and bone in his lower leg.

"I'm honestly trying to be careful with it so I don't have any setbacks," he said. "Maybe a little overcautious, when I can be.

The Lions are hoping this season lasts longer than the previous one. They missed the playoffs last year for the 16th time this century.

Detroit finished 6-10 in Patricia's first year, plummeting with seven losses over the last 10 games after getting off to a solid start under the former New England Patriots defensive coordinator.

Patricia also made a significant coaching change, firing Jim Bob Cooter and hiring offensive coordinator Darrell Bevell to try to move the ball and score in a new way.

Stafford is expected to be under center more often in Bevell's system that strives for balance after often getting snaps in the shotgun as part of pass-heavy game plans.

"We're not going to be dropping back every single play and throwing the ball," Bevell said.

When opponents throw the ball, cornerback Darius Slay wants to pick off as many as possible. Slay insisted his desire to get a new contract won't impact his play.

"I'm going out there to dominate," he said.

Slay and defensive tackle Damon "Snacks" Harrison reported to camp on Wednesday after missing the team's mandatory minicamp last month, hoping their absences would help them get new contracts. Both were put on the non-football injury, as was defensive tackle Darius Kilgo, to give them more time to get into better shape before joining teammates for drills during practice.