Lions look to Swift, Williams, others to improve run game 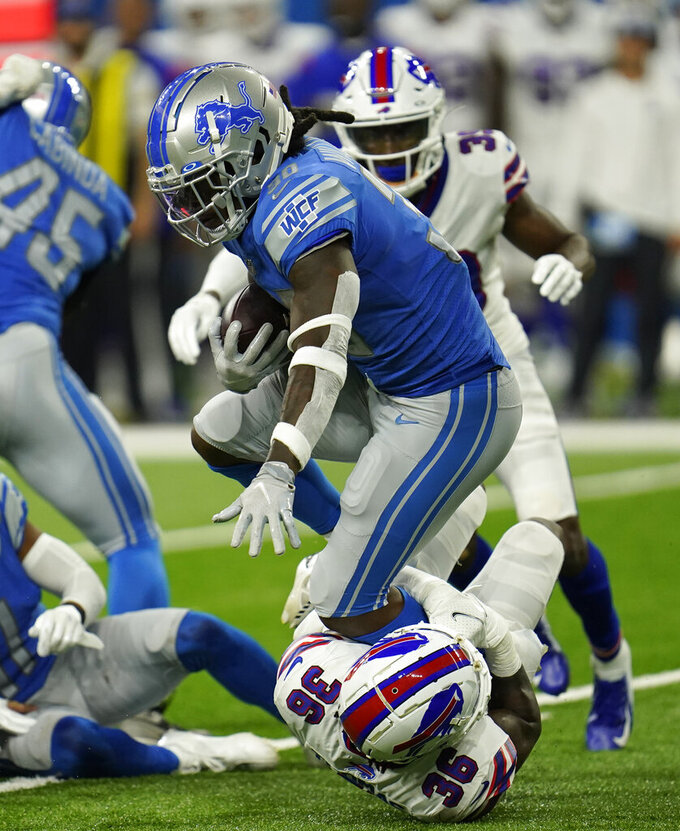 Detroit Lions running back Jamaal Williams (30) is stopped by Buffalo Bills defensive back Josh Thomas (36) during the first half of a preseason NFL football game, Friday, Aug. 13, 2021, in Detroit. (AP Photo/Paul Sancya)

ALLEN PARK, Mich. (AP) — The Detroit Lions plan to lean on a backfield tandem of D’Andre Swift and Jamaal Williams this season, and newly acquired running back Craig Reynolds showed a flash of promise in the team’s preseason opener.

Swift, the Lions’ second-round draft pick in 2020, figures to be the centerpiece of Detroit’s running game. However, a nagging groin injury has limited him in training camp this year.

Coach Dan Campbell said Swift is trending in the right direction, but he isn’t expecting to use the running back Saturday night against the Pittsburgh Steelers in the Lions' second preseason game.

“We’ll get him some reps in practice, just see where he’s at to that point, but I don’t see him playing this weekend,” Campbell said Thursday.

This isn’t the first time Swift has had to deal with an injury in the preseason.

Last year, a leg injury kept him out for a significant portion of training camp. But after being eased into the lineup during his rookie season, Swift proved why he was worth the investment. He rushed for 116 yards and two touchdowns in Week 6 against the Jacksonville Jaguars and finished the season with a team-high 4.6 yards per carry.

After practicing in full on Thursday, Swift is ready to put the injuries behind him.

It won’t be up to Swift alone to help turn around a Lions running game that hasn’t finished among the top 10 in total yards since 1998.

Detroit signed former Green Bay running back Williams this offseason. Though Williams rushed for only 15 yards on nine carries in the preseason opener, he impressed the coaching staff by converting on two third-and-1s during the Lions' second drive.

“To know that you have a guy that if it’s anywhere in that range, he’s going to find a way to puncture the line of scrimmage and get you a first down,” Campbell said, “not only does that give you confidence as a play caller and a head coach, it gives the offensive line a lot of confidence.”

The Lions will use the next few weeks to figure out who will round out their running back depth chart beyond Swift and Williams. Seventh-round pick Jermar Jefferson has made a positive impression in training camp but rushed for only 7 yards on four carries in the preseason opener.

Last week against the Buffalo Bills, it was Reynolds who stood out among Detroit’s reserves. Reynolds rushed for 49 yards on six carries, including an impressive 24-yard touchdown, just a day after signing with the team. He dressed on Friday night with only a basic knowledge of the playbook and hadn’t met all of his teammates yet.

“I introduced myself in the huddle at one point,” Reynolds said after the game. “They were like, ‘Yo, what’s your name?’ A couple coaches introduced themselves to me on the sideline during the game. It was definitely crazy."

Reynolds has spent two seasons in the NFL, making brief appearances on the rosters of the Washington Football Team, Atlanta Falcons and Jacksonville Jaguars. A standout at Division II Kutztown, Reynolds has carried the ball only once in a regular-season NFL game, but he already is drawing praise from the Lions’ lead back.

“He did a great job coming in, studying the plays they gave him so he was ready,” Swift said. “And when his time came, he made the most of it. Really proud of him.”

NOTES: Campbell expressed regret for cutting longtime Lions long snapper Don Muhlbach on his 40th birthday. “That falls on me,” Campbell said. “It’s my fault and Don’s a hell of a dude. It sucks, but it is what it is.” … Hall of Fame running back Barry Sanders announced Friday on Twitter that he has tested positive for COVID-19 but is not experiencing symptoms.