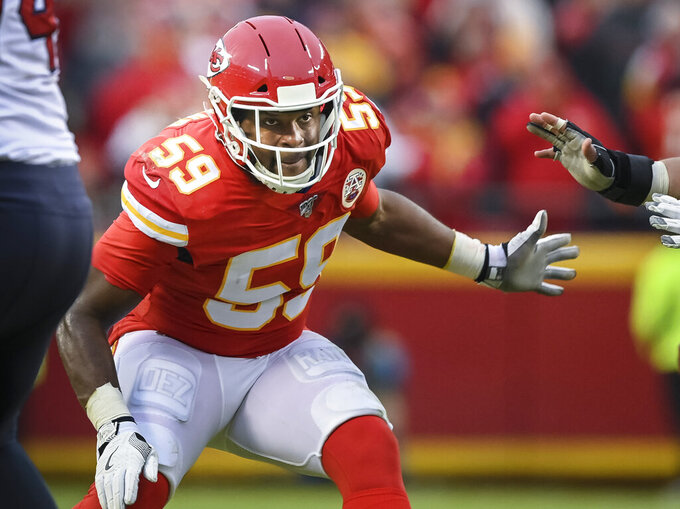 FLE - In this Jan. 12, 2020, file photo, Kansas City Chiefs inside linebacker Reggie Ragland (59) plays against the Houston Texans during the second half of an NFL football game in Kansas City, Mo. The Detroit Lions have agreed to a contract with linebacker Reggie Ragland, according to a person with knowledge of the deal. The person spoke on condition of anonymity to The Associated Press on Friday, March 27, 2020, because the deal had not been announced. (AP Photo/Reed Hoffmann, File)

DETROIT (AP) — The Detroit Lions have agreed to contracts with linebackers Reggie Ragland and Elijah Lee.

The Lions confirmed the deals Friday.

Ragland started 32 games over the past three seasons with the Kansas City Chiefs. He was drafted by the Buffalo Bills in the second round in 2016, but a knee injury in training camp cost the former Alabama player that entire season. The Bills traded him to Kansas City in 2017, and Ragland finally made his debut with the Chiefs.

Detroit has overhauled its defense this offseason, and the linebacking unit is no exception. The Lions previously cut Devon Kennard and added Jamie Collins.

Lee comes to Detroit from the other participant in last season's Super Bowl, the San Francisco 49ers. He was drafted by Minnesota in the seventh round out of Kansas State in 2017, and the 49ers signed him off the Vikings' practice squad.

Lee played in 38 games for the 49ers in three seasons, including six starts. He started one game last season.