Lions sank to additional depths in loss to Washington 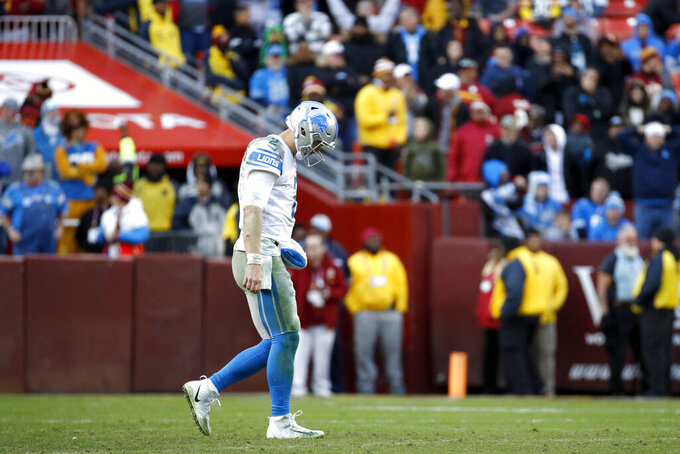 Amid mounting injuries, the Lions lost 19-16 on Sunday to a Washington team that had only one previous victory this season — and hadn’t won at home in around 13 months. The malaise surrounding that game was palpable. Winning would have proven little for either team, but losing was even worse.

“I’m always disappointed when we don’t win,” coach Matt Patricia said Monday. “I think everybody that knows me knows how competitive I am, and that’s what we’re trying to do. But I would say, for me and this team, we’re fighting every single week to try to go out and do our best and make sure we’re putting ourselves in a position where we can have that opportunity to win. I also know that this is a process.”

About the only thing improving for the Lions right now is their draft position. Injuries have been a factor — quarterback Matthew Stafford missed a third straight game Sunday — but Detroit was heading in the wrong direction even before he was sidelined. The Lions started the season 2-0-1 but have lost seven of eight games since then.

Although there are five games remaining in the regular season, there’s already speculation about what the offseason holds for Detroit, and the players need to guard against looking ahead.

“We’ve got a chance to get better every day and get a win. I’m tired of losing, quite frankly,” linebacker Devon Kennard said. “I’m not a loser. I refuse to accept that.”

Detroit led 16-13 in the fourth quarter Sunday before allowing a tying field goal with 1:49 remaining. Then Jeff Driskel threw an interception, which set up the winning kick with 16 seconds left.

A last-ditch Detroit drive ended with another interception, the third of the day thrown by Driskel.

Not a whole lot, but Bo Scarbrough was solid for a second straight game for the Lions, rushing for 98 yards on 18 attempts.

The Lions once again appear adrift as an organization as they head into their big Thanksgiving game. Patricia inherited a team that went 9-7 for two seasons before coach Jim Caldwell was fired. The roster was thought to have plenty of potential, but Patricia is now 9-17-1 since taking over — and if talent is the issue, that doesn’t reflect well on general manager Bob Quinn, who is in his fourth season in charge.

“I think it’s always hard to judge and say, ‘Definitely, this is exactly where we are and where we’re going to be,’” Patricia said. “I would say, I’m always encouraged by the way that the team right now fights every single week. I’m encouraged by some of the players that I see out there improving and getting better and playing more consistent.”

Well, Stafford’s stock keeps going up as the Lions play poorly without him. Caldwell’s stock is up for similar reasons.

Among the people still on the field for Detroit, the much-maligned defense wasn’t bad Sunday, allowing just 230 yards. Washington’s lone touchdown came on a kick return.

Driskel looked pretty good at times in his previous game, and he had 63 yards rushing Sunday to go with 207 passing. But he led the Lions to just one touchdown, and his two interceptions in the final minute allowed the game to slip away.

Defensive tackle Damon Harrison was injured late in the fourth quarter, and wide receiver Marvin Hall left early in the fourth with a foot injury. That added to a lengthy list of injuries for the Lions, who were already missing Stafford, defensive back Tracy Walker, offensive lineman Frank Ragnow, defensive end Trey Flowers and defensive lineman Da’Shawn Hand.

The Lions did not practice Monday, but with their next game coming up Thursday, they released an estimation of what practice participation would have been: Stafford, Hall and Flowers were listed as not practicing, and Driskel was limited with a hamstring issue. Hand, Harrison, Walker and Ragnow were listed as limited as well.

15 — The number of consecutive games in which the Lions have had the lead at some point. They have won only five of them.

It’s a short week for Detroit before hosting the Chicago Bears on Thursday. The same teams played last year on Thanksgiving, and Chicago won 23-16.