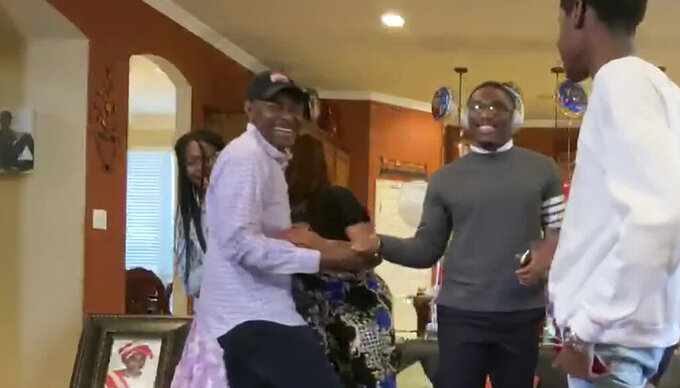 In this still image from video provided by the NFL, Jeff Okudah, second from right, celebrates during the NFL football draft Thursday, April 23, 2020. (NFL via AP)

The Detroit Lions became the first team in more than two decades to take a cornerback in the first three picks in the NFL draft.

Detroit drafted the Ohio State standout with third overall pick Thursday night, making him the highest-drafted cornerback since Shawn Springs was selected from the same school by Seattle in 1997.

“It’s a crazy feeling, being drafted that high," Okudah said. “Obviously, the Detroit Lions think a lot about me. It’s up to me to return that and give them all that I have.”

The Lions desperately need game-changing talent to help a defense that ranked No. 31 in the league last season.

The 6-foot-1, 205-pound Okudah can blanket receivers in man-to-man coverage and make tackles to stop the run. He had three interceptions, all last season, as opposing teams chose not to test him often. Okudah also made 88 tackles, including 68 solo, and defended 21 passes over three seasons with the Buckeyes.

“I try to consider myself a technician,” he said. “I try to sharpen my sword every chance I can get.”

The Lions were expected to take Okudah if they didn't trade out of the high slot to acquire multiple picks, and teams did not appear to be interested in making a deal.

The Lions were last in the NFL against in the pass last season and then traded three-time Pro Bowl cornerback Darius Slay to Philadelphia last month for draft picks. Signing cornerback Desmond Trufant, who turns 30 in September, after Atlanta released him last month appears to be a solid move even if it is only a short-term solution.

Okudah, who is from Grand Prairie, Texas, enrolled early at Ohio State in January 2017. His mother died shortly afterward following a battle with lymphoma. He watched the draft at his aunt’s house near Dallas with his sister, uncle, two cousins and trainers.

“She would’ve been in tears,” he said. “She didn’t really understand football like that, being born Nigeria, but she knew what made me happy.”

Lions general manager Bob Quinn and coach Matt Patricia need Okudah to pan out this year and it may help their job security if some other selections also contribute right away. Owner Martha Firestone Ford brought back Quinn for a fifth year and Patricia for a third year, but made clear contending for the playoffs was the expectation.

Quinn and Patricia are counting on quarterback Matthew Stafford being healthy. He missed the second half of last season with a back injury, leading to a nine-game losing streak. The 32-year-old Stafford has three years left on his $135 million deal.

The franchise certainly has more needs on its defensive line, but there are also voids on offense. Quinn let guard Graham Glasgow go in free agency, raising concerns about Stafford having enough time to throw to receivers such as Kenny Golladay.

Detroit went into the draft with three picks on Friday, including the No. 35 overall pick. The Lions have nine selections overall, including a pair of picks in the third and fifth rounds from the Slay trade. They have five late picks to potentially trade up to land a player they covet.