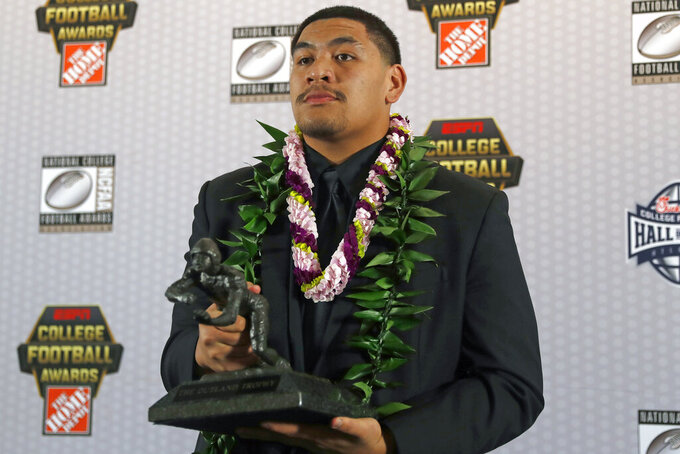 FILE - In this Dec. 12, 2019, file photo, Oregon's Penei Sewell poses with Outland Trophy for being the nation's best interior lineman, in Atlanta. Sewell is a likely first round pick in the NFL Draft, April 29-May 1, 2021, in Cleveland.(AP Photo/John Bazemore, File)

Penei Sewell can recall sleeping with family members on the floor in a shack in American Samoa, hoping his life would lead him to the NFL.

Sewell is now living his dream.

“Now look at us," Sewell said after the Detroit Lions selected him with the No. 7 pick in the NFL draft Thursday night. “I’m in a position to really change my family dynamic and also to play at the level I wanted to play my whole life."

“To be a part of that room and be able to join them, that’s a blessing," he said. “That’s a lot of knowledge in that room. I’m going to soak it all up and be a sponge.”

The 6-foot-5, 331-pound Sewell did not play last season after starting his first two years at Oregon, opting out of last year’s Pac-12 season that was delayed because of the pandemic. As a sophomore, he won the Outland Trophy, honoring the nation's best interior lineman, and the AP Pac-12 Co-Offensive Player of the Year award.

“He’s a transcendent player," general manager Brad Holmes said. “He's got the toughness, the grit and the intangibles."

Sewell allowed only one sack in 20 career starts and 1,376 snaps with the Ducks.

“There’s more to do and there's more to come," he said. “I haven’t even started yet. I feel like there’s a lot to do. The sky is the limit and I’m ready to tap into that potential."

Holmes is leading a front office for the first time, taking on the tall task of turning around a franchise that has struggled for decades. He was in charge of the Los Angeles Rams' college scouting department the past eight years.

“We couldn’t be any more jacked about landing Penei," Holmes said.

Sewell is Detroit's first offensive lineman drafted in the top 10 since Lomas Brown was selected at No. 6 in 1985.

The Lions potentially could have drafted cornerbacks Jaycee Horn of South Carolina or Patrick Surtain, the players taken with the following picks, to bolster a defense that was among the worst in NFL history last season.

Taking a wide receiver, to address the team's biggest void, was also an option. Heisman Trophy winner DeVonta Smith was still on the board until Philadelphia traded up two spots to take him at No. 10 overall.

And even though the the Lions have Goff, selecting Ohio State quarterback Justin Fields was a possibility because he was on the board until Chicago traded up to take him with the No. 11 pick.

Holmes said Sewell was one of three players he was hoping to take early in the first round, declining to identify the other two prospects.

Detroit went into the draft with six picks, including an extra third-round selection acquired from the Rams in a blockbuster trade for Matthew Stafford that also gave Detroit quarterback Jared Goff, along with first-round picks in each of the next two years.

On Friday night and Saturday, the Lions will likely look to address some of their many needs such as wide receiver, defensive line, linebacker and defensive back.

Detroit seems to be set at just a few positions, including running back, tight end and center.

The Lions did not go into the week with a sixth- or a seventh-round pick because former general manager Bob Quinn gave up the selections as part of trades to acquire defensive end Everson Griffen from Dallas and send safety Quandre Diggs to Seattle.

The Lions fired Quinn and coach Matt Patricia in November and closed the season with double digits in losses for a third straight season. To replace Patricia, they hired New Orleans tight ends and assistant head coach Dan Campbell.

When Campbell was introduced as the team's new coach in January, he told reporters his players would play with so much toughness they would bite off an opponent's kneecap.

“I’m joining the team with that same mindset ready to run through anybody," Sewell said. “Coming each and every day, putting on the pads to get under somebody’s chin and make them feel uncomfortable."