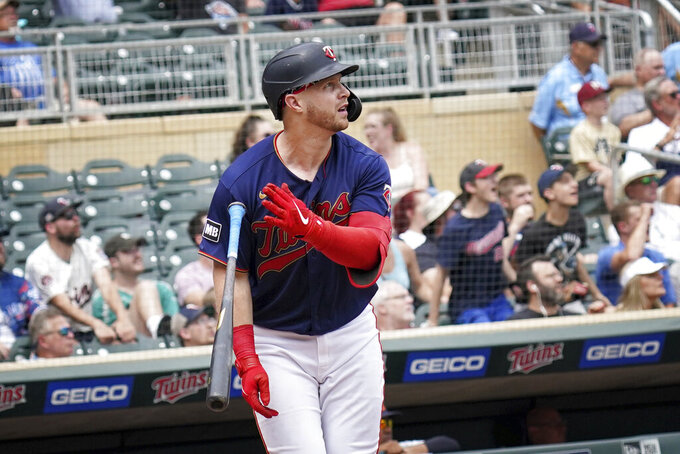 MINNEAPOLIS (AP) — Playing to a score befitting an NFL matchup, the Detroit Tigers and Minnesota Twins also were counterpunching like the best of boxers.

Detroit finally had enough for a knockout blow.

Jeimer Candelario and Eric Haase each drove in three runs and the Tigers, despite giving up seven homers and not hitting any, outlasted the Twins 17-14 Wednesday.

“Credit to them for continuing to fight when they’re down by 10 and then both teams decided to throw haymakers the rest of the day,” Detroit manager A.J. Hinch said.

The Tigers led 10-0 in the fourth in an MLB game with a score more likely suited for a game between the Lions and Vikings.

After Detroit scored eight times in the top of the fourth, Minnesota got six runs in the bottom half, highlighted by Ryan Jeffers’ grand slam. Down 13-6, the Twins scored six more in the eighth on Miguel Sanó’s second homer of the game and drives by Max Kepler, Brent Rooker and Jeffers.

Minnesota became the fourth team since 1901 to hit seven homers in a nine-inning game and lose, and the first since the Chicago White Sox on June 25, 2016, against Toronto.

“It felt like a movie out there,” Twins manager Rocco Baldelli said. “We play a ton of baseball games, and it didn’t feel like, really, any of them that I’ve seen throughout the years, and we’ve seen some crazy ones. I’m not surprised that there’s some odd facts popping out from that effort, from what we just saw.”

Haase’s three-run double in the ninth gave the Tigers another cushion. Jorge Polanco hit a two-run homer in the Twins ninth.

The Tigers posted their highest run total of the season and won their second straight game, assuring themselves of at least a .500 finish for the month of July. Since going 8-19 in April, Detroit is nearing its third straight winning month.

“To put up 17 with no home runs, you got to pass the baton to the next guy and do your job at the plate,” Tigers catcher Grayson Greiner said. “It’s a great all-around team effort to get the win and get the series win.”

Derek Holland (2-2) pitched a scoreless inning for the win.

A scheduling quirk has led to the teams playing 12 games against each other in the past 21 days, an occurrence lamented by both managers recently.

“We’re tired of the Twins and they’re probably tired of us,” Hinch said. “I am glad the way we responded to end the second couple of series. We saw them at home and then hard-fought, come-from-behind series win at their place. We’ve seen enough of them until they come to our place for the makeup game.”

The rematch is a makeup game scheduled in Detroit on Aug. 30 before one final three-game series in Minnesota at the end of September.

The familiarity didn’t leave many surprises between the teams. The hitters have taken advantage, no more so than in the fourth inning.

The first seven batters of the inning reached against Happ. Candelario’s two-run double ended Happ’s day and Willi Castro added an RBI triple as Detroit scored its most runs in an inning since plating nine in the fifth inning against Seattle on April 25, 2017.

Minnesota countered with six runs on eight hits in the bottom of the inning. Sanó started the scoring with a solo homer and Jeffers added his first career grand slam, the second straight day a Twins catcher hit a grand slam. Mitch Garver hit a slam Tuesday night.

“We face them a lot,” Jeffers said. “A lot of times it happens when you face a team a lot. They know what you’re trying to do to them. If you’re not executing perfectly, they’re going to put good swings on it. It worked vice versa today.”

Tigers: INF Jonathan Schoop was scratched from the lineup after the back with back tightness. Schoop was hurt in Tuesday night’s game but finished the game. Manager A.J. Hinch said Schoop was stiff when he came to the park on Wednesday.

Twins: Garver’s right wrist was still swollen and sore on Wednesday after he was hit by a pitch in Tuesday’s game. X-rays were negative for any issues and manager Rocco Baldelli said Garver “came out of it OK.”

Twins: After an off day, Minnesota travels to St. Louis for a three-game series against the Cardinals. RHP José Berríos (7-5, 3.48) is scheduled to start for the Twins. Berríos, who allowed zero earned runs in seven innings in his last outing, is a potential trade candidate ahead of this week’s deadline. The Cardinals have LHP Wade LeBlanc (0-2, 4.58) lined up to start.