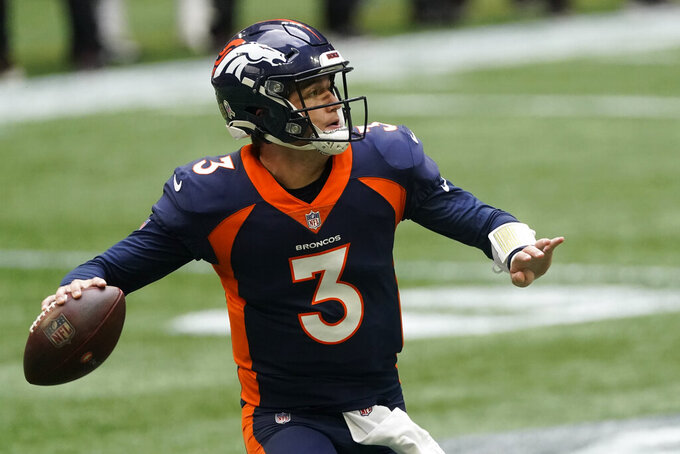 Denver Broncos quarterback Drew Lock (3) works in the pocket against the Denver Broncos during the first half of an NFL football game, Sunday, Nov. 8, 2020, in Atlanta. (AP Photo/John Bazemore)

ENGLEWOOD, Colo. (AP) — Drew Lock and Pat Shurmur are going to have to figure out how to smooth Denver’s Jekyll and Hyde offense without the quarterback’s favorite target.

Lock said Wednesday that he’s bummed about losing rookie tight end and college buddy Albert Okwuegbunam, who was placed on IR this week with a season-ending right knee injury.

Lock and Okwuegbunam (pronounced owe-COO-ay-BOO-num but known to all as ‘Albert O.‘) hooked up for 17 touchdowns in their two years together at the University of Missouri. That built-in chemistry was evident last summer when Lock zeroed in on the 6-foot-5, 260-pound rookie during red zone drills.

A strained hip slowed him coming out of camp, however and Okwuegbunam didn’t make his debut until Week 6 when he caught two passes for 45 yards at New England. A week later, he led the team with seven receptions on seven targets for 60 yards against Kansas City.

Two weeks ago, he hauled in his first touchdown catch in the pros, but he tore his right ACL on his only catch Sunday at Atlanta.

“ It makes me sad about Albert. Like, actually sad, human sad. Believe it or not, we are still humans even though we play in the NFL,” Lock said. “He worked really, really hard this offseason, grinded on the playbook, got his chance, played well, and was going to be a big weapon for us in these last games.”

Instead, he’s sidelined just like No. 1 wide receiver Courtland Sutton, who sustained the same type of knee injury, a torn ACL, in Week 2.

“It’s extremely unfortunate what happened to him, especially with him just being a good friend of mine,” Lock said of Okwuegbunam. “It stinks. You never want it to happen to anyone. I know he’s just a little upset, regardless of what he’ll say, you’re definitely upset and sad about what happened. It’s the team’s job, the trainers’ job, and even a little bit of his job to keep his spirits high and keep him moving forward.”

And it’s the rest of the offense’s job to find ways to transfer the Broncos’ second-half success, particularly in the fourth quarter, into faster starts.

In the past two weeks, the Broncos have stumbled at the start and fallen behind by three touchdowns before furious rallies in the fourth quarter. They came back to beat the Chargers 31-30, but came up short against the Falcons 34-27.

“It’s exciting to be a part of,” Lock said of the furious fourth quarters. “We just need to do it earlier.”

The past two weeks, Lock threw for just 98 and 58 first-half yards without a touchdown, but in the fourth quarter has thrown for 151 and 153 yards with five touchdowns total.

That’s led to widespread criticism on the Colorado airwaves of Shurmur, the Broncos' offensive coordinator, for not turning Look loose from the start and going up-tempo before it’s an absolute necessity.

Lock said the problem is the Broncos keep finding themselves facing third-and-long early in games and running back Phillip Lindsay lamented the number of three-and-outs that prevent them from finding any rhythm early on.

“We don’t get enough yards at the beginning of the drives to make it manageable,” Lindsay said. “We don’t make it third-and-2, third-and-3, third-and-4. We’re making it third-and-10, third-and-7, penalties. That right there kills drives and after a while you can't expect your defense to continue to hold up when you keep going three-and-out.

“We have to find a way to put it all together ... and get first downs because first downs turn into touchdowns.”

COVID-19 CONCERNS: The Broncos activated RG Graham Glasgow from the COVID-19/reserve list Wednesday but DE Shelby Harris tested positive for the coronavirus after having been in close contact with infected individuals. Harris, the fourth Broncos player to test positive for the virus, will miss his second straight game. He didn't make the trip to Atlanta so he could quarantine.

“It’s a big blow,” coach Vic Fangio said. “He’s been playing very, very well this season for us. He’s probably having the best season of his career up to this point. He missed last week; he’ll miss this week. It’s a big blow anytime you lose one of your better players, but we’ve got players behind him that will step in and give us the best and we’ll find a way.”

NOTES: WR Jerry Jeudy (shoulder) and RT Demar Dotson (groin/hand) didn’t practice Wednesday, but CBs A.J. Bouye (head) and Bryce Callahan (ankle) returned after missing last week’s game. ... Fangio said recently re-signed CB Devante Bausby won’t be able to play this weekend because of the COVID-19 protocols he has to go through after his release from the Cardinals.