Lock, several other Broncos players have come down sick 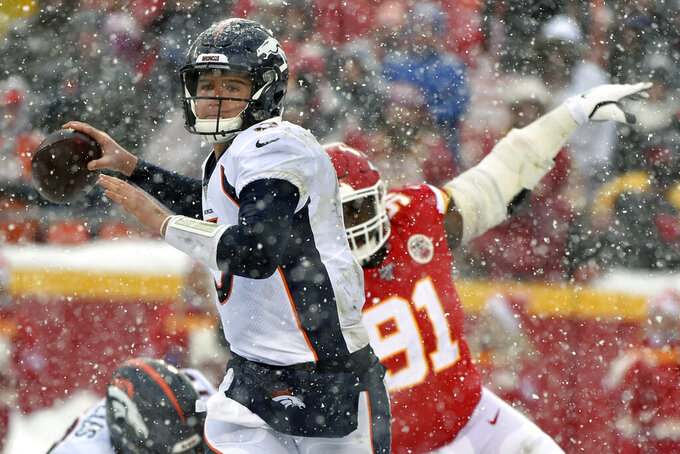 Lock and Fant practiced but Risner was held out. If he can't play Sunday, he'll be replaced by first-year pro Patrick Morris.

Coach Vic Fangio said Risner, Fant and nose tackle Kyle Peko have been hit the hardest by the bug, "but there's a few other guys that have lighter stages of it."

Fant is also dealing with a sore shoulder.

"I didn't think he was going to practice today, but he was out there," Fangio said.

Lock was a full participant at Friday's practice and Fant was limited.

In all, there were a season-high 19 players listed on the injury report for the Broncos (5-9), who host the Detroit Lions (3-10-1) on Sunday. Several other players also were ill but didn't need treatment beyond over-the-counter medicine.

In addition to Lock, center Connor McGovern and right guard Austin Schlottmann came down sick Friday but still practiced. Two other O-linemen, Ja'Wuan James (knee) and Ronald Leary (concussion), were ruled out for the game.

Peko got sick Thursday but returned to practice Friday and is 50-50 for the game along with defensive ends DeMarcus Walker (ankle) and Dre'Mont Jones (ankle).

The Broncos lost defensive end Adam Gotsis to knee surgery this week and will place him on IR when they sign or promote another player this weekend.

The award, which is voted on by local media members, was created in memory of the late cornerback Darrent Williams, who was killed in a drive-by shooting on New Year's Day 2007 after completing his second season in Denver. The award is given annually to the player who best exemplifies Williams' character, candor and cooperation with the media.

"What Darrent stood for and who he was, this award is held in high regard in my eyes," said Simmons, who was cited for his "unwavering professionalism both after wins or losses, as well as the willingness to offer opinions at every opportunity that were thoughtful and refreshingly candid."

All 13 winners so far are defenders. Simmons, who also won in 2017, joins cornerback Chris Harris Jr. as the only two-time honorees.