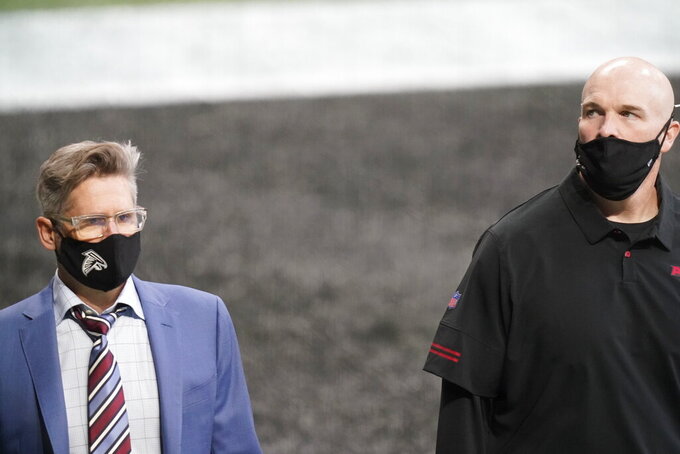 FILE - In this Sept. 27, 2020, file photo, Atlanta Falcons general manager Thomas Dimitroff, left, speaks with Falcons head coach Dan Quinn before an NFL football game against the Chicago Bears, in Atlanta. Atlanta coach Dan Quinn has been fired after the Falcons dropped to 0-5 for the first time since 1997. The move came just hours after the Falcons lost to the Carolina Panthers 23-16, Sunday, Oct. 11, 2020. The team also fired longtime general manager Thomas Dimitroff, who had been with the team since 2008. (AP Photo/Brynn Anderson, File)

MINNEAPOLIS (AP) — Less than four years after their infamous Super Bowl loss on a blown 25-point lead, the Atlanta Falcons hit the reset button with a dual in-season dismissal of the general manager and head coach.

The Minnesota Vikings were already taking the long view this year. They moved on from several established players for younger and cheaper replacements and doubled down on a commitment to leadership continuity during the offseason.

Now the Falcons and Vikings are matched up in Week 6 with only one win between them, providing another reminder of how fast an NFL team can find itself veering off the contender track into the pack of also-rans, works in progress and full-on rebuilding projects.

“Right now, we’ve got a lot of people in disarray, both on the personnel side and the coaching side, and everybody is trying to figure out what to do and how we’re going to do it next,” said Falcons interim coach Raheem Morris, who was promoted after Dan Quinn was fired five games into his sixth season. General manager Thomas Dimitroff, in his 12th year, was also let go.

The Falcons (0-5) have scored first in four of five games. They held a 15-point lead over Dallas and a 16-point advantage on Chicago, both times past the midpoint of the fourth quarter, and still lost. Seven-time Pro Bowl wide receiver Julio Jones has been sidelined for all but one half of the last three games due to a hamstring injury. Team owner Arthur Blank, in his video news conference to discuss the Dimitroff and Quinn firings, declined to commit to quarterback Matt Ryan for the future.

“We still have a long way to go this season,” Ryan said, “so we can’t get stuck in this woe-is-me feeling over how we started. We’ve got to find a way to win this week and change the narrative.”

Though the Vikings (1-4) reached the divisional round of the playoffs last season and extended the contract of quarterback Kirk Cousins, their recent spending spree on premium players — primarily new deals for homegrown stars — forced them into a transition mode this year. Salary-cap constraints triggered a major cornerback overhaul. Wide receiver Stefon Diggs was traded, partly due to tension created by his dissatisfaction in the offense. Nose tackle Linval Joseph and right guard Josh Kline were let go, and both players have been missed.

Coach Mike Zimmer, who received a three-year contract extension along with general manager Rick Spielman over the summer, acknowledged last month he misjudged the amount of development work that was needed on the revamped defense. Seven of the 16 players who took more than one snap for Minnesota in the 27-26 loss at Seattle last week were picked in one of the last three drafts, including rookie cornerbacks Jeff Gladney and Cameron Dantzler.

Still, after two ugly games to start the season, the four teams the Vikings have lost to have a combined 16-2 record. Two of them were by one point. The game against the Seahawks still bred some confidence for the rest of this strange pandemic-altered year.

“When I look around our locker room, I don’t see guys who are a problem, and you would be surprised at how often that can be the case in a locker room where you have certain guys who just haven’t figured it out," Cousins said, adding: “Down to the very last guy, I just feel really good about our group.”

Quinn believed in a player-friendly approach, often referring to his team as “The Brotherhood.” Blank was asked if he'll prioritize a full-time replacement with a similar relatability or instead seek more of a disciplinarian.

“This is a situation where you can and probably should have both,” Blank said, before using a golf analogy: “You use different clubs for different reasons. I think it’s important to have a leader.”

Vikings running back Dalvin Cook has a groin injury that forced him out in the second half at Seattle, leaving his status for Atlanta uncertain with the bye week looming after.

Alexander Mattison proved his capability in relief, finishing with a career-high 112 yards on 20 carries plus three catches for 24 yards. The Vikings are third in the NFL with an average of 5.2 yards per rush.

“The more touches you get, the more you can get in a rhythm, so it’s awesome to have the experience,” Mattison said.

Todd Gurley is coming off his most productive game with Atlanta, with 14 carries for 121 yards against Carolina to hit the 100-yard mark for the first time in 22 games since getting there on Jan. 12, 2019, for the Los Angeles Rams in the divisional round of the playoffs.

Gurley had his 15th career game with at least 150 yards from scrimmage since entering the league in 2015, passing Ezekiel Elliott and Christian McCaffrey for the most in that span. Gurley also had a season high with four catches for 29 yards against the Panthers.

With Gladney and Dantzler giving them two rookies in the starting lineup at cornerback for the first time since 1999, the Vikings played their best pass defense of the season against the Seahawks as star quarterback Russell Wilson had his statistically worst game of 2020.

Despite eight incompletions in 12 attempts on the final drive, though, Wilson took advantage of Dantzler's inexperience and hit D.K. Metcalf for a 39-yard completion on fourth-and-10 and the winning touchdown from 6 yards out.

“I still feel good about Dantzler. I think he’s going to be a heck of a player," Zimmer said, adding: "We’re probably not the last team that Russell Wilson will come back in the fourth quarter on.”