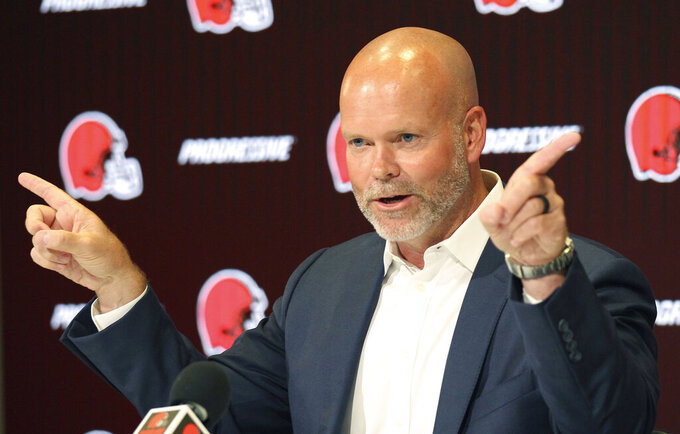 Former Cleveland Browns kicker Phil Dawson explains to the media how the wind blows the flags on the goal posts in opposite directions during his announces of his retirement from the NFL, Friday, Aug. 2, 2019, retiring as a Cleveland Brown at the team's headquarters in Berea, Ohio. (John Kuntz/The Plain Dealer via AP)

BEREA, Ohio (AP) — Phil Dawson spent his first 14 seasons with the Browns and is the only kicker in franchise history to be named to the Pro Bowl.

In announcing his retirement Friday, the 20-year veteran will forever be a member of the team.

General manager John Dorsey signed Dawson to an actual NFL player contract — not a ceremonial one-day pact — by clearing a spot on the 90-man roster for him, then placed him on the reserve/retired list.

Thanks to the extremely rare gesture, Cleveland will retain the 44-year-old's rights in perpetuity.

"I'm humbled that the Browns organization would take time to make this happen," said Dawson, who ranks seventh in league history with 305 games played, eighth with 441 field goals and 11th with 1,847 points.

"The connection that I had and still have to the city of Cleveland is my most cherished accomplishment of my career. It's good to be home."

Though Dawson played four years with the 49ers and his final two seasons with the Cardinals, his heart was always in Northeast Ohio. He remains the Browns' leader with 305 field goals and an .840 field goal percentage, and his 1,271 points only trail Hall of Famer Lou Groza in team history.

The Texan was a member of Cleveland's expansion team in 1999 and made the Pro Bowl in his swansong season of 2012. The latter required a groundswell of fan voting and community-wide support that Dawson recalls fondly.

"Every time I took the field, I could feel the confidence they had in me -- probably more than I had in myself -- and I was determined that I would not let them down," said Dawson, who made 29 of 31 field goals that season, including 7 of 7 beyond 50 yards. "You guys who were here remember. It was the best season I ever had. That is a perfect example of the power of the Cleveland fans."

The love was reciprocal as Dawson cheered for the Cavaliers during the 2016 NBA Finals against Golden State when they broke Cleveland's epic 52-year championship drought. He had to keep his fandom private, however, being in San Francisco at the time.

"I found myself a couple of times about tweet, 'I love you Cleveland. Congratulations,' but then I would have gotten run out of my place of employment," he said, chuckling. "I had to keep it quiet, but quietly I was thrilled.

"There haven't been many days over the last six years since I left that I haven't thought about coming back to Cleveland."

Dorsey, Browns co-owner Dee Haslam and vice president JW Johnson welcomed Dawson back to the organization, while coach Freddie Kitchens had him address the team's specialists after practice.

The 5-foot-11, 200-pounder is expected to be recognized Saturday at the annual Orange and Brown Scrimmage at FirstEnergy Stadium before returning home to Austin, Texas with his wife Shannon and their three children.

"My answer to 'What is the highlight of your career?' would be today," Dawson said. "There is no greater sports town in America than Cleveland. There are no greater fans in football anywhere. And there will be no greater place on the planet to be when the Lombardi Trophy goes down Euclid Avenue. You can bet your last dollar I will be there to celebrate with everyone."