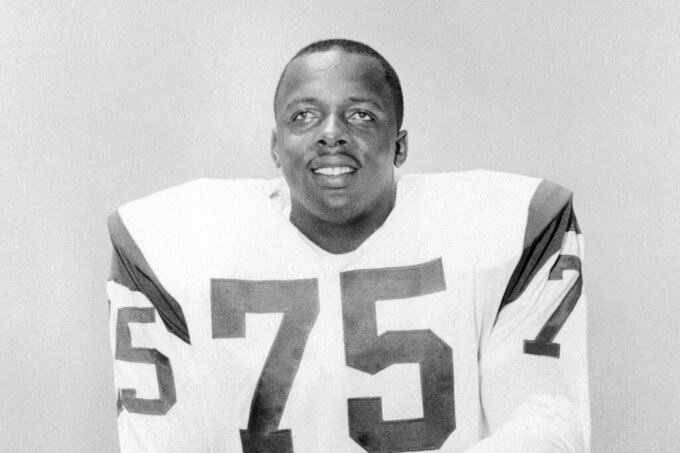 FILE - This is a 1966 file photo showing Los Angeles Rams football player David "Deacon" Jones. Rams defensive end Deacon Jones might have been the most feared player in the league after being drafted in the 14th round in 1961 out of South Carolina State. (AP Photo/File)

The 1960 NFL season was played with 13 clubs, with the expansion Dallas Cowboys joining the league that season and the Chicago Cardinals moving to St. Louis. The other teams were Cleveland, the New York Giants, Philadelphia, Pittsburgh, Washington, the Baltimore Colts, Chicago, Detroit, Green Bay, the Los Angeles Rams and San Francisco.

The Minnesota Vikings were an expansion team the following season, with the Atlanta Falcons joining in 1966 and New Orleans in 1967.

The AFL launched in 1960 with the Boston Patriots, Buffalo Bills, Houston Oilers, New York Titans, Denver Broncos, Dallas Texans, Oakland Raiders and Los Angeles Chargers. The Chargers moved to San Diego the following year, the Texans became the Kansas City Chiefs and Titans changed their name to the Jets in 1963, Miami was added in 1966 and Cincinnati in 1968.

The Packers were the dominant team of the 1960s, winning NFL championships in 1961, '62 and '65 and then winning the NFL titles and the first two Super Bowls against the AFL champion Kansas City in the 1966 season and Oakland in the 1967 season with a roster that included 12 Hall of Famer players and coach Vince Lombardi.

The tough luck team of the decade might have been the Baltimore Colts. They lost 13-10 in overtime to Green Bay in the 1965 playoffs when they had to play with halfback Tom Matte as the QB with Johnny Unitas and backup Gary Cuozzo injured. They tied for the best record in the league in 1967 when they went 11-1-2 but missed the playoffs when they lost a tiebreaker with the Rams. They were even better the following year despite losing Unitas to an injury in the preseason. Baltimore went 13-1 in the regular season, won the NFL title with a 34-0 victory over Cleveland but then lost the Super Bowl to the New York Jets in one of the biggest upsets ever.

The best AFL team might have been the Kansas City Chiefs in 1969. Overshadowed by the Jets, who won the Super Bowl the previous year, Hall of Fame coach Hank Stram's squad might have been even more dominant. The Chiefs featured eight Hall of Fame players on that team led by defensive standouts Buck Buchanan, Willie Lanier, Bobby Bell, Emmitt Thomas, Johnny Robinson and Curley Culp. Kansas City had the No. 1 defense in the AFL in terms of scoring, running and passing and allowed just 20 points in three playoff games. Hall of Fame quarterback Len Dawson led the offense and kicker Jan Stenerud also made it to Canton.

Chargers receiver Lance Alworth was perhaps the AFL's greatest player after opting for the new league over the more established NFL in 1962. He topped 1,000 yards receiving in his final seven seasons in the AFL and led the league in receptions, yards and TD catches three times each during that span. His best season was in 1965 when he had 1,602 yards receiving and 14 TDs in a 14-game season, averaging 23.3 yards per catch. He was a first-team All-Pro selection in six straight seasons. He finished his career with 542 catches for 10,266 yards and 85 TDs in 137 games.

Unitas emerged as a star in the late 1950s when he led Baltimore to the title in 1958 against the Giants. That success carried over into the next decade when he was the signature quarterback in the league. His 26,548 yards were the most by anyone in the NFL in the 1960s, he was the MVP in 1964 and '67 and was selected as a first-team All-Pro three times that in the decade.

Cleveland running back Jim Brown only played until 1965 but his impact in the first six years of the '60s was enough to make him perhaps the most dominant player in the NFL during that period. Brown led the NFL in rushing in all but one his nine seasons in the NFL and is the only player in league history to average more than 100 yards a game on the ground. He was MVP in 1963 and a first-team All-Pro in five of his six seasons in the decade. Brown's 12,312 yards rushing stood as the NFL record for nearly two decades after he retired and he would have had even more prolific numbers if he hadn't quit in 1966 because Browns owner Art Modell threatened to fine him for missing the start of training camp to finish filming "The Dirty Dozen."

Rams defensive end Deacon Jones might have been the most feared player in the league after being drafted in the 14th round in 1961 out of South Carolina State. Jones harassed quarterbacks throughout his career and is widely credited with coining the term "sack." While sacks wouldn't officially be counted for players until 1982, Pro Football Weekly estimated he had 173½ in 191 games. Jones was a first-team All-Pro for the final five seasons of the decade.

Lombardi was so iconic that the league named the Super Bowl trophy after him. He won five titles in the 1960s with the Packers, including the first two Super Bowls. He never had a losing record in the NFL, winning 73% of his regular-season games and going 9-1 in the playoffs. Green Bay was known for its dominant running game that featured Paul Hornung running the "Lombardi sweep."

Sid Gillman. The impact Gillman had on the game was immense as he is known as the father of the modern NFL passing game. He was one of the game's great offensive innovators with the Chargers in the AFL, known for his deep passing attack. He had only a .550 winning percentage and went 1-5 in the postseason, but his coaching tree is extensive, with greats such as Al Davis, Chuck Noll, Chuck Knox, Dick Vermeil, George Allen and Don Coryell all working underneath him over the years.

Tom Landry. Landry worked on the same staff on the New York Giants with Lombardi in the 1950s and was the original coach of the expansion Cowboys in 1960. Landry built that franchise from the ground up to challenge the Packers for NFL dominance at the end of the 1960s and the Cowboys later become known as "America's Team." He was known for popularizing the 4-3 defensive formation and "Doomsday Defense."

Ice Bowl. The 1967 NFL championship game was one of the most famous in NFL history. It was a rematch of the title game the previous season when Green Bay won 34-27 in Dallas on the way to the first Super Bowl title. The game-time temperature was 15 degrees below zero with a wind chill of minus-48. Making matters even worse, the turf-heating system at Lambeau Field malfunctioned, turning the surface to ice. The Cowboys led late 17-14 late in regulation when Starr led from the Packers 32 to the 1. On third down with 16 seconds left and no timeouts remaining, Lombardi went for the win and Starr sneaked it in behind Jerry Kramer for the 21-17 victory.

Super Bowl III. The AFL and NFL announced a merger in 1966 to form a unified league starting in 1970. In the interim, the two champions would play in what would become known as the Super Bowl. The more established NFL won the first two title games relatively easily behind the Packers and the third one figured to be a mismatch as well between the upstart New York Jets of the AFL and the vaunted Baltimore Colts of the NFL. The Colts went into the game as 18-point favorites but Joe Namath famously "guaranteed" a New York win. The Jets dominated the game, rushing for 142 yards and forcing five turnovers to win 16-7 and establish the AFL teams as legitimate rivals to the NFL squads.

The biggest change in the '60s was the launch of the AFL, which brought more high-powered offensive attacks to professional football in a style of play that still resonates today. The AFL aggressively challenged the NFL by signing several of the top college players and targeting NFL stars behind the leadership of Al Davis, who was the Raiders coach and then commissioner before the merger was announced. The AFL also cleared the way for more black players to enter the league by mining historically black colleges for talent that the NFL had long overlooked.

Pete Rozelle was elected commissioner of the NFL in 1960 and his leadership helped set the stage for the NFL becoming America's dominant sport. One of Rozelle's most lasting accomplishments came early in his tenure when he convinced big market teams such as the New York Giants and Chicago Bears to pool the league's national television rights, assuring that smaller markets such as Green Bay would get an equal share of the revenue. With the value of television rights skyrocketing in the ensuing years, that decision provided more equal footing between franchises and helped establish the parity that Rozelle believed was so crucial to the league's success.

The shotgun formation got its name in 1960 when coach Red Hickey brought it to the San Francisco 49ers with quarterback John Brodie. The Jets used it briefly with Joe Namath to ease the pressure on his injured knees. The formation didn't really reach popularity until a decade later when Landry used it in Dallas.