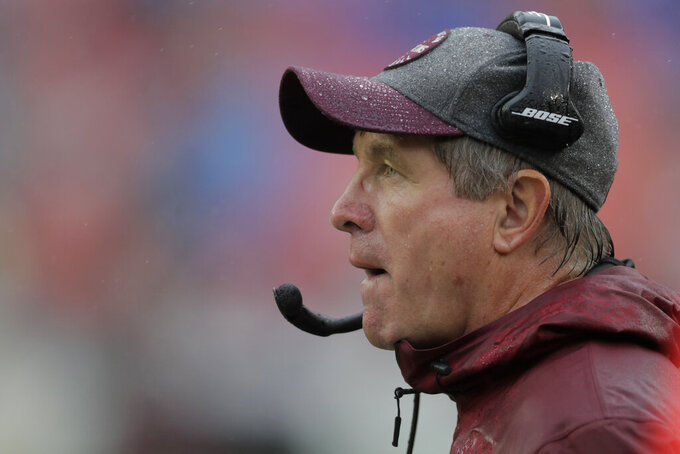 ORCHARD PARK, N.Y. (AP) — Linebacker Lorenzo Alexander took a moment from discussing the "whuppin," as he put it, the Bills defense experienced last weekend to assess the sorry state of the Washington Redskins, one of his former teams.

"It's shocking in some ways," Alexander said, of a once-proud franchise off to a 1-7 start and traveling to face the Bills (5-2) on Sunday. "With the ups and downs, the drama, the stuff that's not football-related can wear on you."

Washington has changed coaches, with Bill Callahan taking over for Jay Gruden, who was fired following an 0-5 start. There's the drama of offensive tackle Trent Williams' uncertain playing status, which remains unresolved even after he reported to the team this week.

"I've been on teams like that when you're down to your third-string quarterback and a guy that hasn't had a lot of reps," said Alexander, who spent seven of his 15 NFL seasons in Washington. "It's just hard to win."

Tantalizing as the matchup might look, Alexander understands the Bills can't overlook anyone despite being off to their best start in eight years.

Questions continue as to whether Buffalo is benefiting from a soft schedule. The Bills' five wins have come against opponents entering this weekend with a combined record of 7-31. Those concerns didn't lessen after Buffalo was pushed around on both sides of the ball in a 31-13 loss to the Eagles last weekend.

The Josh Allen-led offense mustered a season-low 253 yards and managed two first downs on its final six possessions. The usually stout defense gave up a season-worst 218 yards rushing, including 156 in the second half.

"We never want to be dominated the way we were last week," Alexander said. "But one game doesn't define us."

In Washington, Callahan is taking a step-at-a-time approach to inject a sense of respectability into a team in jeopardy of opening with one or fewer win through its first nine games for only the fifth time, and first since going 1-8 to open the 1998 season.

"We're making progress. I think that's internal and it's hard for me to say publicly that we're improving when we're at the point that we're at right now," Callahan said. "But for the guys in the room, that's our sole focus is just getting better every day."

The matchup will be the first to feature two running backs with at least 13,500 yards rushing.

Selected 15th overall out of Ohio State, Haskins has had extra time to prepare after going 3 of 5 for 33 yards and an interception over the second half of a 19-9 loss at Minnesota on Oct. 24. Overall, he's gone 12 of 22 for 140 yards, with four interceptions in two relief appearances.

"Next step in my progression? First start," said Haskins. "We'll see how it goes from there."

Veteran offensive tackle Donald Penn has no worries in believing Haskins will do "just fine."

"He's really trying to hold it in, but I think he's really excited and juiced about this, which he should be," Penn said.

Washington has been outscored 101-46 in the second half, including allowing the winless Dolphins' first points following halftime this season in a 17-16 win. Washington also allowed 109 second-half rushing yards to Minnesota last week.

"You can say maybe we play a lot of snaps, but everybody across the league plays a lot of snaps," inside linebacker Jon Bostic said. "But when it comes down to it, we've got to win. We've got to get off the field."

Washington has been granted a roster exemption for Williams, who failed his physical because of helmet discomfort after having surgery to remove a tumor from his skull. Williams said he told the team of the medical issue six years ago, and the growth on his head grew substantially over time.

Williams said he distrusts the team's medical staff and adds he was "told some scary things" by doctors which changed his outlook on life.

He has not committed to playing for the Redskins again.