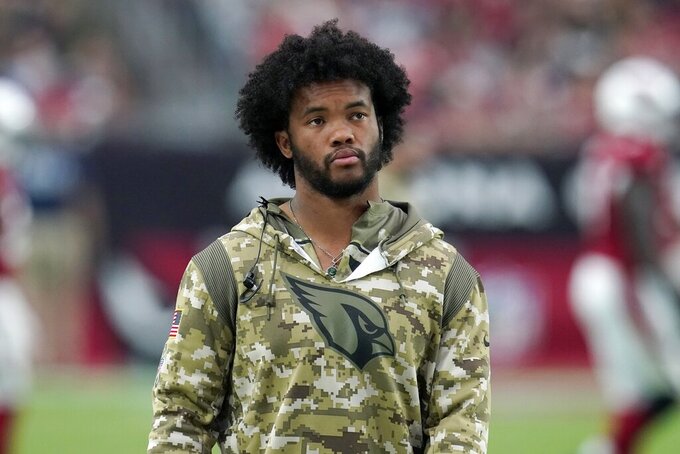 An injured Arizona Cardinals quarterback Kyler Murray paces the sidelines during the first half of an NFL football game against the Carolina Panthers Sunday, Nov. 14, 2021, in Glendale, Ariz. (AP Photo/Darryl Webb)

The Cardinals' second go-round without their two main playmakers on the field didn't go nearly as well as the first. The Carolina Panthers whipped the short-handed Cardinals 34-10 on Sunday, building a 23-0 halftime lead before cruising to the easy win.

Arizona (8-2) still looks like one of the NFL's top teams, but there's little doubt the Murray-Hopkins combo has to stay healthy in the season's second half. Murray has been hobbled by an ankle injury, Hopkins has a bum hamstring.

Kelvin Beachum said the team wasn't going to let one very bad day change what's been a very good season to this point. The right tackle added that there's “no reason to think the sky is falling.”

The Cardinals have one more game before their much-anticipated bye week over Thanksgiving. Arizona travels to face NFC West rival Seattle next weekend.

“We've got to get some stuff cleaned up,” Cardinals coach Kliff Kingsbury said. “There is no doubt.”

Cardinals backup quarterback Colt McCoy played so well in last week's win against the 49ers, it might have lulled Arizona into a false sense of security against the Panthers. McCoy completed 22 of 26 passes for 249 yards and a touchdown in San Francisco.

But things unraveled quickly against the Panthers.

McCoy fumbled after being sacked on the third play of the game and the Panthers were able to turn that into a quick touchdown when Cam Newton ran for a 2-yard score.

Newton's return appeared to give Carolina an edge in energy that the Cardinals simply couldn't match. The 2015 NFL MVP signed with his former team earlier this week, running for a touchdown and throwing for one.

McCoy finished 11 of 20 passing for 107 yards and one interception.

No offense to McCoy, but it's probably better if the 35-year-old isn't playing much at all.

If he's on the sideline, that probably means Murray is back on the field. The 24-year-old QB has thrown for 2,276 yards, 17 touchdowns and seven interceptions this season while also running for three touchdowns.

A lot of Murray's passing success has been due to his connection with Hopkins. The three-time All-Pro receiver has caught seven of Murray's 17 touchdowns this season.

Kingsbury wants Murray back as much as anyone, but he's not going to rush him back into the huddle.

“We’re going to be smart and make sure he’s 100%, or close enough to where he can do his thing,” Kingsbury said. "Like I’ve said, whatever percent that is, he’s got to be able to move and play, and do what he does.”