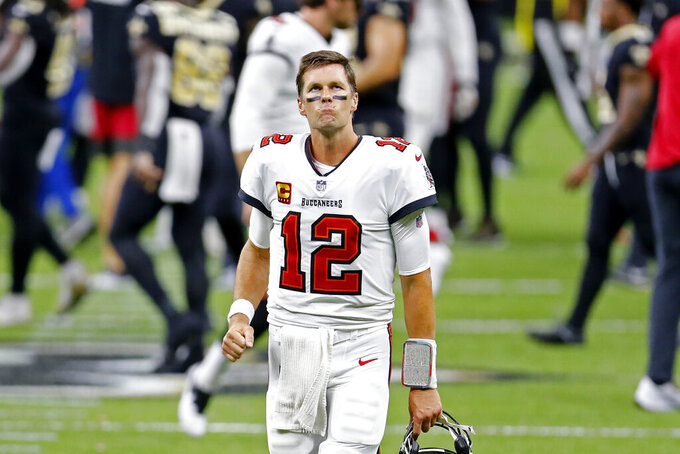 TAMPA, Fla. (AP) — The Tampa Bay Buccaneers have a lot of things to fix if they’re going to realize their potential this season..

Tom Brady says it. So does Bruce Arians.

Truth is, every team in the NFL is saying the same thing one game into a journey they hope will wind up at the Super Bowl.

“Every team is going to wish they did things better,” Brady said after struggling in his much-anticipated Bucs debut in New Orleans, where he threw for two touchdowns but also had one of his two interceptions returned for a second-half TD in a 34-23 loss.

Tight end O.J. Howard suggested if there was a silver lining to losing to the Saints, it’s that a talented-laden team with lofty expectations might benefit from being served a piece of “humble pie” early — rather than later — in the season.

“It doesn’t matter how much talent you have if you throw interceptions returned for touchdowns,” the 43-year-old quarterback said, “so I’ve got to correct that.”

Arians conceded Monday that he was surprised that Brady struggled after beginning the game with an 85-yard touchdown drive.

“He looked like Tom Brady in practice all the time, so it’s kind of unusual to see that in the ballgame because they didn’t do the things that we didn’t get ready for. Everything they did, we thought we were ready for,” Arians said.

“Can’t say we were out of sync because we started out as good as you could start out going right down the field. Then, we don’t get any more chunk plays other than pass interference penalties,” the coach added. “I think it’s a great learning experience. It’s just Round 1 of a 16-round fight, and we’ll learn from it.”

Arians offered a blunt assessment of the interceptions, attributing one to a miscommunication between Brady and receiver Mike Evans, saying the other was a “bad decision” on a sideline throw Saints cornerback Janoris Jenkins turned into a Pick-6.

Arians, who has also worked with Peyton Manning, Ben Roethlisberger, Carson Palmer and Andrew Luck during a long coaching career, doesn’t shy away from making critical comments about the play of his quarterbacks.

“It speaks for itself. If you’re throwing an out route, you don’t throw it low and inside. And that hasn’t been the case up until that one, ” Arians said. “(He) was a little bit late on it, and it probably (would have been) a better decision to go somewhere else with the ball.”

The coach, however, stressed Brady and the Bucs will be fine.

“He knows how to bounce back,” Arians said. “He knew he didn’t play very well. It’s not what he expects from himself, nor do we expect. I would anticipate him to have a little more grit, a little more determination this week.”

With the exception of a couple of breakdowns and crucial penalties, Arians felt the defense played well enough to win. The Saints were limited to 82 yards rushing on 34 attempts, while record-breaking receiver Michael Thomas was held to three receptions for 17 yards.

“I thought he played really well for a rookie against an All-Pro,” the coach said. “You knew he was going to get beat once, maybe ... but he battled hard, and his run blocking was really good.”

Left tackle Donovan Smith, a six-year starter, yielded two sacks and didn’t have a good day in run blocking against the Saints.

“I was very disappointed in his play,” Arians said. “I think every now and then he reverts back to some techniques that aren’t very good. ... He had probably the easiest guy to block up there and he did a poor job.”

Evans played at New Orleans despite sitting out three practices last week because of a hamstring injury. He had just one reception for 2 yards, but it was for a touchdown. Evans also drew a pass interference penalty on a deep throw, setting up Brady’s 9-yard TD pass to Howard.

0 — The Bucs were 5 for 5 converting on third-and-1 against the Saints, but 0 for 8 in situations where they needed to gain more than a yard.