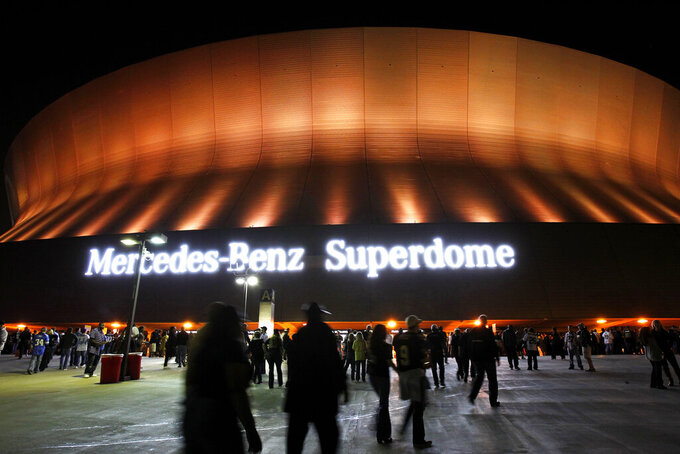 FILE - This Dec. 4, 2011, file photo shows an exterior view of the Mercedes-Benz Superdome before an NFL football game between the New Orleans Saints and the Detroit Lions in New Orleans. Louisiana lawmakers Thursday, July 22, 2021, decide whether to let the New Orleans Saints make a new naming rights deal for the Superdome, after Mercedes-Benz' contract for its moniker to be emblazoned on the stadium has expired.(AP Photo/Gerald Herbert, File)

Terms of the contract are still being finalized. But the deal is estimated to be worth about $138 million through 2041, according to information provided to the Joint Legislative Committee on the Budget, the House and Senate panel that approved the naming rights transfer without objection.

The money will go to the Saints organization, as provided in state law as part of Louisiana's contractual arrangement with the NFL team.

But the Saints intend to spend the cash on renovations and upkeep of the domed stadium, said Evan Holmes, with ASM Global, the company that manages the state-owned Superdome and other facilities in the Louisiana Stadium and Exposition District.

This will be the first naming rights deal for an NFL stadium that, when reached, includes a direct connection to a casino. The Dolphins play in Hard Rock Stadium, but that agreement did not have a link to any casinos in 2016, the NFL confirmed.

The Superdome bore the Mercedes-Benz name and icon for the past decade, but that 2011 sponsorship expires July 31. Caesars wants to take over the naming rights starting in August.

The Saints said a formal announcement of the new sponsorship agreement will come when a final deal is struck with Caesars Entertainment. Photos of how the dome exterior and interiors will look with the new Caesars Superdome branding, signage and logo were provided to lawmakers.

Sen. Katrina Jackson, a Monroe Democrat, was not impressed. She said the font of the Caesars name — chosen by the company — looks “gaudy and cartoony."

Holmes replied that such mock-ups are always a bit over the top.

“I think it will be a little more subtle than the renderings,” he told Jackson.

The Superdome hosts not only home Saints games but also Essence Festival, the New Orleans Bowl, the Allstate Sugar Bowl, the Bayou Classic football game between Southern University and Grambling State University, and other events. The 2025 Super Bowl is scheduled to be played in the stadium.