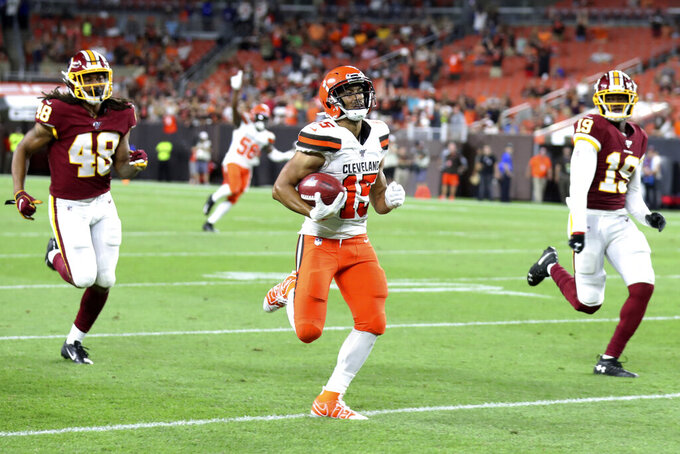 FILE - In this Aug. 8, 2019, file photo, Cleveland Browns' Damon Sheehy-Guiseppi (15) runs 86-yards for a touchdown on a punt return during the second half of the team's NFL preseason football game against the Washington Redskins, in Cleveland. “I just saw the hole,” he said afterward surrounded by reporters. “I ran as fast as I could to the hole and tried to take off.” (AP Photo/Ron Schwane)

Truth is, the Browns rookie returner has become a lovable NFL long shot.

On Thursday night, his inspiring, made-for-TV tale took a dramatic turn when Sheehy-Guiseppi, who briefly slept outdoors in Florida after deceiving his way into a free-agent workout where the Browns found him, returned a punt 86 yards for a touchdown. Cleveland opened the preseason with a 30-10 win over the Washington Redskins.

"I just saw the hole," Sheehy-Guiseppi said afterward, describing his first punt return in a game in three years. "I ran as fast as I could to the hole and tried to take off."

He flew, showing the speed that caught the eye of Alonzo Highsmith, Cleveland's vice president of player personnel, in April.

And as the 24-year-old outran the Redskins, all of his teammates ran with him. They sprinted down their sideline and onto the field, intercepting him in the end zone. That's where all of the Browns, including quarterback Baker Mayfield and star receiver Odell Beckham, tackled Sheehy-Guiseppi in a heartfelt celebration that showed how much they care for him.

"I felt all the love," he said. "I couldn't breathe under the pile. I was over there gasping for air, but I felt the love."

Just a few months ago, Sheehy-Guiseppi decided to take one last shot at his dream of playing professional football.

A national junior college All-American at Phoenix College, he had been cut by a community college basketball team and ran track, all the while hoping to refine his return and pass-catching skills enough to warrant an NFL tryout.

Through a friend, he learned there would be a scouting tryout in Miami, so he made the trip without an invitation but convinced that if he could get in, his talent would shine.

Sheehy-Guiseppi found out that Highsmith would be in attendance, and this is where he used his elusiveness like never before. He had to persuade the person checking the list of invited players that he knew Highsmith, which just wasn't true. So when he spotted Highsmith, Sheehy-Guiseppi quickly rushed over to him and introduced himself.

"Knew nothing about him," Highsmith told the team's website.

The handshake was enough to get Sheehy-Guiseppi on the field, and once he ran a 4.38 in the 40 and did some other things, Highsmith was sold and told him the Browns would bring him to Ohio for a closer look.

There was another wrinkle for Sheehy-Guiseppi. He had purchased a one-way plane ticket to Florida and had nowhere to stay before heading to Cleveland the next week.

Sheehy-Guiseppi considered sleeping on the beach before settling for a patch of grass next to a fence outside the facility of NFL combine trainer Pete Bommarito. He trained there for a week, starting his day at 6 a.m., lifting weights and doing conditioning work until 3 p.m. He showered at a nearby 24-hour fitness center and charged his phone at a laundromat.

On a tight budget, he ate one or two meals a day, making sure one was ample enough to sustain him.

He eventually got to the team's facility in Berea, where he displayed that same blistering speed Highsmith witnessed to Browns general manager John Dorsey. The team signed him, and for the moment, he's an NFL player with all the training camp perks that go with it.

His chances of sticking around permanently are slim, but Sheehy-Guiseppi has already overcome longer odds.

When he entered Thursday's game, the Browns players who were sitting on the bench got up to watch No. 15, who had only shown brief flashes of his breakaway gear during practices.

"He was telling us that he could run a 4.3," said wide receiver Rashard Higgins. "We told him we haven't seen that all camp. But it looked like he ran 4.3 to me."

The spontaneous end-zone celebration was a touching tribute to Sheehy-Guiseppi, who has been known to show up at Cleveland's facility at odd hours to work out.

"It is good to see good people, hard-working good people succeed," said Browns coach Fredddie Kitchens. "He definitely fits the bill with being that. If you stick around after any practice, you will see him on the practice field getting extra running in and before practice getting extra work in. He is always at the office. He is a good kid."

And there he was following Friday's outdoor practice, back inside the Browns' indoor field house to get in some extra work before retelling his amazing story.

He's become an instant celebrity, but Sheehy-Guiseppi's staying grounded and driven. Those traits, and some resourcefulness, have gotten him this far. He's not about to change.

"Someone trying to chase their dreams," he said when asked to describe his story. "Doing what they love and not listening to anyone else."