Lower cap leads to more cuts than usual in NFL 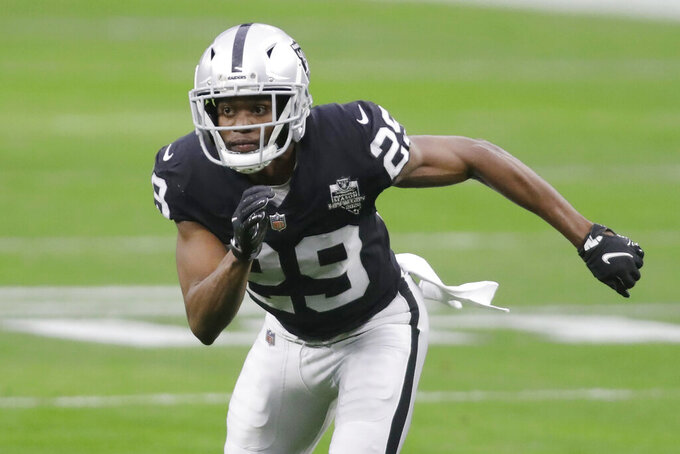 FILE - Las Vegas Raiders free safety Lamarcus Joyner (29) plays against the Indianapolis Colts during the first half of an NFL football game in Las Vegas, in this Sunday, Dec. 13, 2020, file photo. Whether it was Kansas City getting rid of banged-up and expensive starting offensive tackles Mitchell Schwartz and Eric Fisher, or the Raiders cutting ties with Lamarcus Joyner and Tyrell Williams, veterans around the league have been sent to the chopping block. (AP Photo/Isaac Brekken, File)

If it seemed as if NFL teams have been shedding contracts nearly as fast as signing them in recent weeks that’s because it’s almost true.

With a shrinking salary cap in a sport with few contracts that are fully guaranteed, teams have spent the weeks leading up to free agency and the first few days of the new league year getting out of deals signed in recent years when there was more money available to spend.

Whether it was Kansas City getting rid of banged-up and expensive starting offensive tackles Mitchell Schwartz and Eric Fisher, the Raiders cutting ties with Lamarcus Joyner and Tyrell Williams after building their free agent class around them, or Tennessee shedding starting defensive backs Adoree Jackson, Malcolm Butler and Kenny Vaccaro, veterans around the league have been sent to the chopping block.

In all, according to transactions data from SportRadar and contract information from Spotrac and Over The Cap, teams have released players with a combined total of approximately $600 million left on the deals they originally signed between the Super Bowl and the end of the first week of the league year. That figure excludes players who were on rookie or minimum level deals.

The cuts have come after the salary cap was reduced from $198.2 million in 2020 to $182.5 million in 2021 in response to the reduced revenues resulting from mostly empty stadiums last year because of the coronavirus.

The bloodletting could have been even more severe had the league and the NFLPA not agreed to spread those losses over multiple years.

“I think the unprecedented part being, for the first time in modern era, the cap decreases instead of increases,” Rams general manager Les Snead said. “But again, I think many people on this planet, not just us in NFL football, have had to make sacrifices, some probably harder than others over the past year.”

Cutting high-salaried players is nothing new in the NFL where most free agent contracts have teams often committing to paying lucrative signing bonuses and guaranteed money in the first couple of years of a deal and then deciding whether to keep the player or get rid of him to create salary cap room.

But the rate of it increased substantially this season because of the lowered cap with the total amount of contracts cut in the same time period equaling about $445 million in 2020 and $227 million in 2019.

One of the teams in a cutting mode was the Raiders. Coach Jon Gruden bragged in 2019 about the free agent haul he brought in after trading away stars Khalil Mack and Amari Cooper instead of giving them big extensions.

He said at the owners meeting that year that the Raiders wouldn’t have been able to get players such as Antonio Brown, Trent Brown, Williams and Joyner without those deals.

Antonio Brown didn’t even last with the team until the opener that season because of run-ins with general manager Mike Mayock and frustration over the type of helmet the league made him wear.

The other three all were sent packing this offseason with Trent Brown traded to New England as part of a 2022 pick swap with two years left on his $66 million, four-year contract, and Williams and Joyner cut this offseason with more than $38 million remaining on their contracts.

The Raiders also cut guard Richie Incognito and brought him back on a cheaper deal, and traded away starting offensive linemen Rodney Hudson and Gabe Jackson for mid-round picks when they refused to take pay cuts.

None of that was part of the original plan.

“If you go back two years and say where was the cap going to be this coming season, the answer would have been plus or minus $225 million,” Mayock said. “We’re looking at ($182.5 million). It’s simple math.”

Some players have come out of the situation more than whole. Adoree Jackson got a three-year deal worth a reported $39 million from the Giants after Tennessee refused to pay his $10.24 million fifth-year option.

Guard Kevin Zeitler got cut with $12 million left on his contract with the Giants and promptly signed a three-year, $22.5 million deal with Baltimore that pays him $10 million this season and guarantees him $16 million.

In one of the more curious cases, Miami cut Kyle Van Noy one year into his four-year, $51 million deal, leaving about $36 million unpaid. Van Noy then returned to New England on a two-year, $12 million deal and the Patriots will also get a fourth-round compensation pick in next month’s draft based on the deal Van Noy signed last March.

Others such as receivers Alshon Jeffery and Adam Humphries are still looking for work after their contracts were wiped out and will be lucky to get similar deals now that they are back on the market.