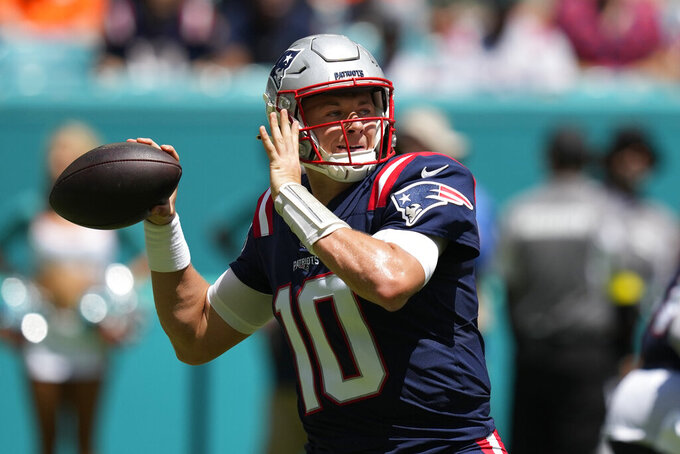 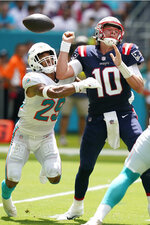 His destination: The X-ray room.

Jones hurt his back in Sunday’s 20-7 season-opening loss to the Miami Dolphins, a game he played start to finish, completing 21 of 30 passes for 213 yards with a touchdown and an interception. He also was sacked twice, one of those getting scooped up for a Miami score.

Patriots coach Bill Belichick was asked after the game if Jones was hurt.

“I haven’t been in the training room,” he said, voice barely above a whisper.

Not long afterward, the Patriots announced Jones would not be available for his postgame news conference because of a back injury. No other details were offered. Belichick is scheduled to speak with reporters again Monday, when the subject will inevitably be raised.

It was a worrisome capper to a frustrating day for the Patriots. The seven points represented the second-fewest they’ve managed in 23 openers under Belichick and a 17-point deficit — it was 17-0 at the half — was the second-largest in Belichick-era openers.

Above all else, there’s this: For the second consecutive year, the Patriots are 0-1. Back-to-back instances of that hadn’t happened in New England since 2000 and 2001, Belichick’s first two seasons, though it should be noted the Patriots went on to win the Super Bowl in that 2001 season.

“Look, Super Bowl is not decided today, right?” Patriots center David Andrews said. “We’ve got 17 — 16 more games now. So, look, how many years you come out here and see a team go 8-0, 6-0, and then don’t make the playoffs? We try to get better each week. We’ll learn from this. I thought it was a great learning experience, just a great defense. I think we all know that.”

The Patriots came to South Florida four days earlier than usual to acclimate to summertime weather conditions, working out in Palm Beach County because there was no way to simulate temperatures in the 90s with plenty of humidity.

And for the first few minutes Sunday, it looked like that plan paid off.

New England took the ball to open the game and was marching: 53 yards in eight plays, much of that coming against little resistance, until Jones lofted a ball toward the front pylon on the right side of the end zone.

DeVante Parker, the former Miami wide receiver making his Patriots debut, was engaged in what would best be described as hand-to-hand combat with Dolphins cornerback Xavien Howard as both jostled for a shot at the ball. Howard swung his left arm skyward, batting the ball away, and Miami’s Jevon Holland caught it for an interception. Jones wanted a pass-interference call; none came, and New England’s collective mood didn’t get much better over the next three hours.

“You want to win, man,” Patriots defensive back Devin McCourty said. “I think you understand how this league works. It’s a result league, win or loss. ... I don’t think this team is going to say, ‘Hey, we’re destined to go 0-17.’ We have some good players. We had good plays today. But in this league, you’ve got to change that fast and get it going, play better and get a win next week.”

First, though, they’ll wait to see who they have under center next week.