Maccagnan sticking around, so it's on GM to turn Jets around 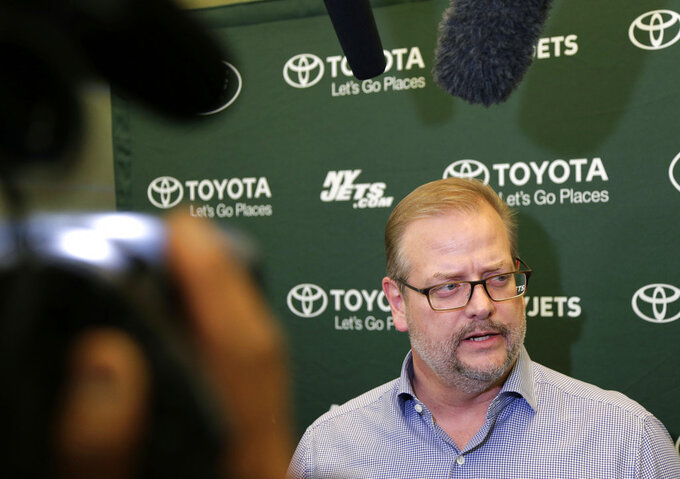 New York Jets general manager Mike Maccagnan speaks to reporters in Florham Park, N.J., Monday, Dec. 31, 2018. After firing Todd Bowles on Sunday night, the New York Jets are focused on bringing in someone who will be able to lead a franchise that has missed the playoffs for eight straight seasons but has a promising young quarterback in Sam Darnold and expects to be busy in free agency this offseason. (AP Photo/Seth Wenig)

What about Mike Maccagnan?

The general manager was hired a day before Bowles in 2015, the two linked together — but separately in the team's reporting structure — for the next four seasons that featured lots of losing and disappointment.

A few hours after completing a 4-12 season, Bowles was fired Sunday night by Christopher Johnson , the team's acting chairman and CEO, who opted to keep Maccagnan in place.

"I think Mike is a good talent evaluator, period," Johnson said Monday. "Looking at the plan we have going forward, I'm a believer in Mike."

That declaration raised some eyebrows from some fans and media, who don't necessarily share the Jets owner's confidence in the man who will play a vital role in finding a new coach and building a roster around quarterback Sam Darnold with about $100 million in salary cap space to work with this offseason.

Bowles deserved a large part of the blame, of course, for New York's 24-40 record in his four seasons. But, the counter-argument is that the coach didn't exactly have a roster filled with overwhelming talent and depth.

And that falls on Maccagnan.

"I think there are definitely things, where the team is right now, that are the result of some of the things — some of the decisions I made — that did not work out well," Maccagnan acknowledged. "I understand that. I definitely know I need to do a better job in certain areas. But I also feel confident that we have added some good pieces to this organization."

The trade up with Indianapolis last winter to draft Darnold at No. 3 overall is the biggest positive of Maccagnan's tenure.

Unless, of course, you consider that the quarterback-needy Jets passed on both Deshaun Watson and Patrick Mahomes in 2017 and instead took safety Jamal Adams — who is already a Pro Bowl pick and a team leader, but not a franchise quarterback. And getting one cost New York two second-round selections last year and a second-rounder this year to be sure it was in position to draft one last April.

Adams, by the way, implored the team after the season finale to get more "dogs" on the roster, playmakers who can make the difference between wins and losses. That could be considered an unintentional criticism of Maccagnan, whose draft record might be the most glaring strike against him.

Only 12 of the 22 players selected in his first three years are still on New York's roster. The first-rounders are starters — Adams, Darron Lee (2016) and Leonard Williams (2015) — but several other early round picks have been busts.

Second-rounders Devin Smith (2015) and Christian Hackenberg (2016), and third-rounders Lorenzo Mauldin (2015) and ArDarius Stewart (2017) are all out of the league. Williams is the only player of the six the Jets drafted in 2015 still on any active roster, let alone New York's.

"Every team wants better talent," Johnson said. "We'd love to have great talent. This team has to get better. Mike knows that."

But some big-name, big-money free-agent signings and trades have also underwhelmed or backfired during Maccagnan's tenure, namely Darrelle Revis, Brandon Marshall, Ryan Fitzpatrick and most recently Trumaine Johnson, who struggled in his first season with New York and was benched for the finale.

In fairness, there have also been some big-time hits on under-the-radar signings, including a pair of Pro Bowlers in kick returner Andre Roberts and kicker Jason Myers, along with linebackers Brandon Copeland and Frankie Luvu.

Leading wide receiver Robby Anderson was an undrafted free agent in 2016, and Maccagnan also swung a deal with the Colts during the draft last April to land defensive end Henry Anderson, who tied linebacker Jordan Jenkins — a third-rounder in 2016 — for the team lead with seven sacks.

"I think we have some good, young players and we've positioned this team very well in terms of the salary cap, which is going to give us the ability to definitely augment our talent base," Maccagnan said. "We also have, even with the players under contract, the ability of roster flexibility. So, although it's a difficult situation bringing a new coach into the environment, I do think we have the ability to adjust things to kind of fit different schemes and stuff like that, potentially."

Johnson reiterated his support for Maccagnan, saying the GM is the right man for the job as the Jets move forward and try to regain respectability.

"I've worked with Mike now for a while," Johnson said. "We've developed what I think is a good plan. It's a plan we're in sync on and it really came together with Sam. Now, we're going to build with Sam, build around Sam and with some great players we have on this team already. I think it's a good plan and I'm looking forward to working with Mike to take us to the next level — including this coach hire."

That's where the spotlight will be over the next few weeks, with the likes of Mike McCarthy, Eric Bieniemy, Kris Richard and Todd Monken expected to interview for the Jets' coaching vacancy.

After that, it will be largely on Maccagnan to change the narrative on his tenure and mold the Jets into a roster of playoff contenders.

"I think our big thing, like everything else," Maccagnan said, "is to keep trying to make good decisions moving forward."