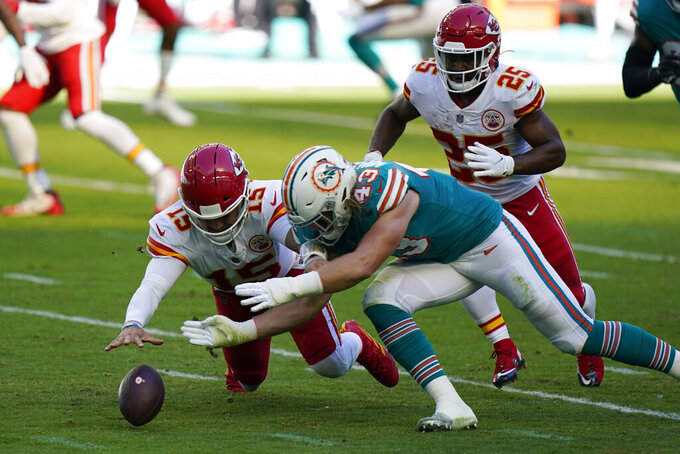 Kansas City Chiefs quarterback Patrick Mahomes (15) and Miami Dolphins outside linebacker Andrew Van Ginkel (43) go after the football after Mahomes fumbled the snap, during the first half of an NFL football game, Sunday, Dec. 13, 2020, in Miami Gardens, Fla. The Chiefs recovered the ball. (AP Photo/Wilfredo Lee) 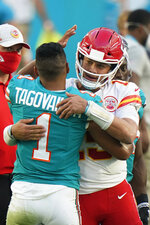 MIAMI GARDENS, Fla. (AP) — Patrick Mahomes took a 30-yard sack before he got the Kansas City Chiefs going in the right direction.

Mahomes took the longest sack in the NFL in five years and was picked off three times, his first multi-interception game in more than two years. But he threw for 393 yards and two scores to help the Chiefs (12-1) earn their eighth consecutive victory.

It was the Chiefs’ second consecutive comeback at Hard Rock Stadium, where they won the Super Bowl in February despite Mahomes' two interceptions.

“We won the Super Bowl here and just clinched the AFC West — it seems every time we leave this stadium we have a hat about something we accomplished,” Mahomes said. “The (bad) part, it seems, is like I have half my interceptions at this stadium.”

With Miami’s loss, the Pittsburgh Steelers clinched a playoff spot.

Tyreek Hill ran through the Dolphins’ secondary and behind it, scoring on a 32-yard run and a 44-yard reception when Mahomes hit him in stride at the goal line.

Travis Kelce had eight catches for 136 yards and a touchdown, Mecole Hardman scored untouched on a 67-yard punt return, and Kansas City’s defense was stout against Tua Tagovailoa and the Dolphins’ injury-riddled offense.

Chris Jones sacked the rookie for a safety for a 30-10 lead, and the Chiefs set a team record with their 10th road win in a row.

“Glad to get the win and get out of here," coach Andy Reid said. "That’s a good football team.”

Kansas City reached 12 wins for the third consecutive season, the longest streak in club history, and has the best 13-game record in franchise history, good for another division title.

“It’s a great accomplishment, fifth time in a row,” Chiefs chairman Clark Hunt said. “One of our goals going back a decade or so was to build a team that could consistently compete for championships, and Andy and his staff have done a great job. There’s a lot still in front of us, but today was a big step.”

The Dolphins (8-5) hurt their playoff prospects by losing for only the second time in the past nine games. Despite Miami's bounty of takeaways, the Chiefs scored 30 consecutive points.

“This is an explosive team, and they went on a run there,” Dolphins coach Brian Flores said. “It was a quick spurt. That’s how they’re built; they go on runs. They went on one there. We collected ourselves, and I thought our guys did a good job of that. We played with poise and got ourselves back in the game.”

Tagovailoa passed for 316 yards and two scores to Mike Gesicki, but also threw his first career interception, which came on his 154th attempt on a long pass that deflected off receiver Jakeem Grant.

That was the Dolphins’ lone turnover, while their defense kept coming up with the ball. Xavien Howard made an interception for the fifth game in a row, and Mahomes’ interception total for the season rose to five.

The Kansas City QB also was tripped up by Jerome Baker on a 30-yard sack.

But the Chiefs mounted touchdown drives of 75 and 72 yards in the second quarter to take a 14-10 halftime lead, and then used their superior speed to pull away.

Tagovailoa led touchdown drives of 80 and 75 yards to cut the margin to six points with 4:25 left, before the Chiefs’ Harrison Butker kicked a 46-yard field goal with a minute left. After a Miami field goal, the Chiefs recovered an onside kick to seal the win.

“We had many opportunities offensively,” Tagovailoa said. “I wasn’t able to execute those plays. This is the result. We ran out of time.”

Mahomes had a rough start. He threw an interception, bobbled a snap and took the big sack to set up the Dolphins’ first touchdown. Then Eric Rowe intercepted Mahomes to set up a field goal for a 10-0 Miami lead.

Baker corralled Mahomes on a third-and-12 play. Defensive end Emmanuel Ogbah forced Mahomes into full retreat, and when the quarterback tried to turn the corner around Baker, he was tripped up at the 3-yard line. Baker finished with 2½ sacks.

Howard, who leads the NFL with nine interceptions, made a spectacular one-handed grab of a pass intended for Hill in the end zone.

Chiefs: T Mike Remmers (back) left the game in the second half.

Dolphins: They play host Sunday to the New England Patriots, who won when the teams met in the season opener.