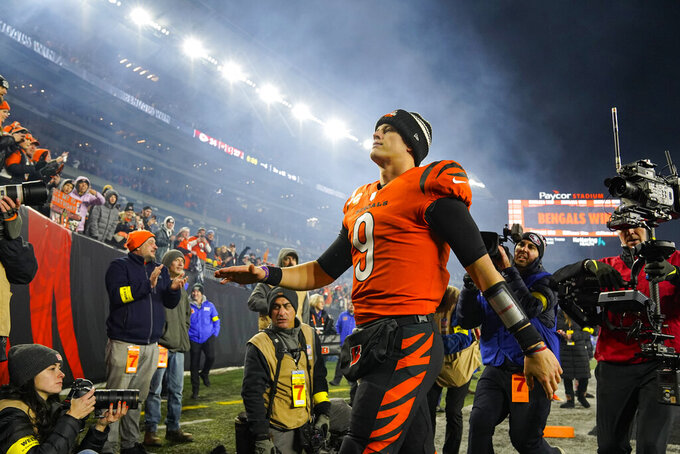 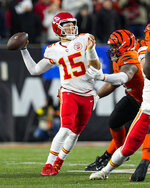 CINCINNATI (AP) — Patrick Mahomes had only lost to one quarterback three times — until Sunday.

Mahomes fell to 0-3 against Joe Burrow and the Cincinnati Bengals, including playoffs, when Burrow rallied his team to a 27-24 victory.

Tom Brady is the only other QB with three wins over Mahomes, but he also has three losses.

Burrow has beaten the Chiefs three times in this calendar year alone. Cincinnati won 34-31 on Jan. 2, then prevailed 27-24 in overtime in the conference championship game four weeks later to send the Bengals to the Super Bowl.

“They just have a well put-together team,” Mahomes said. “You saw the offense — even though it has playmakers, they'll take their time and utilize the clock.”

None more so than on the final drive, when Burrow converted two third downs — including a 14-yard throw to Tee Higgins on third-and-11 — to ensure Mahomes wouldn't get the ball back.

Mahomes gave credit where it was due.

Chiefs coach Andy Reid doesn't think the Bengals' recent success against his squad is anything extraordinary.

“I think it's (just) two good football teams playing each other. We've got to take care of business down the stretch," he said.

“It's part of the NFL, you know,” Kansas City linebacker Willie Gay said. “They're not doing anything we haven't seen. You win some, you lose some. Unfortunately, we've lost the last three we've played against this team. I'm sure we'll see them again.”

Burrow is the only quarterback to face Mahomes multiple times and be undefeated in head-to-head matchups, including the playoffs. The level-headed Burrow doesn't get too worked up over statistics like that.

“It just felt like another regular-season game. It didn’t feel any different," the third-year quarterback said.

Bengals receiver Tyler Boyd said the wins over Kansas City show the quality of the team Cincinnati has built.

The Chiefs are eager for another shot at the Bengals.

“The good news is,” safety Justin Reid said, “we have a lot of football left to play in December, and I'm sure we're going to see those guys again come January.”