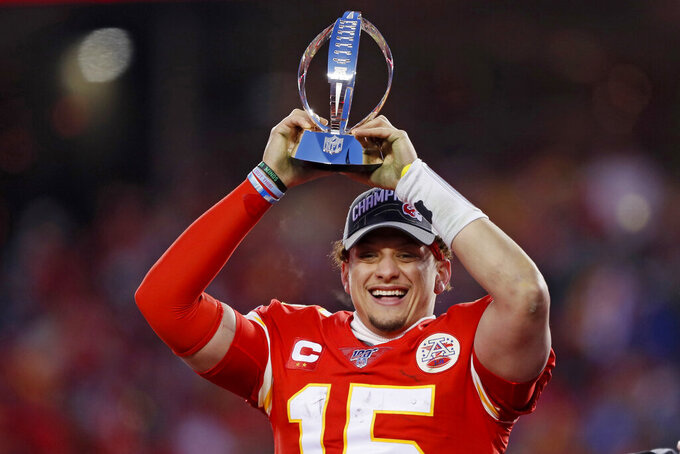 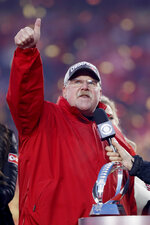 Andy Reid revitalized the Kansas City Chiefs the same way he did with the Philadelphia Eagles.

He's one win away from finishing the job.

The only thing missing from Reid's impressive resume is a Super Bowl title. He is seventh on the career wins list and every coach ahead of him has a championship.

Mahomes did it all in Kansas City's 35-24 victory over Tennessee in the AFC championship game Sunday. He threw for 294 yards and three touchdowns and led the team with 53 yards rushing, including a nifty 27-yard score.

Reid, the quarterback guru who helped develop Brett Favre and Donovan McNabb, saw tremendous potential in Mahomes when he traded up to the No. 10 spot in the 2017 NFL draft to grab the former Texas Tech star. It was the same foresight he had in 1999 when, as a rookie head coach in Philadelphia, Reid selected McNabb with the No. 2 overall pick even though the city wanted Ricky Williams.

Reid was patient with McNabb, holding him out of the starting lineup until Week 10 while veteran and longtime backup quarterback Doug Pederson groomed the rookie. Once McNabb took over, the Eagles were on their way. In 2000, Reid and McNabb led Philadelphia to the first of five straight playoff appearances. They went to four consecutive NFC title games, losing the first three, including two at home.

The Eagles got past that hurdle after the 2004 season, advancing to the Super Bowl only to lose 24-21 to the New England Patriots.

Reid led them to the brink one more time four years later as a No. 6 seed before they lost to Arizona as a road favorite in the NFC championship game.

The Eagles won their last division title under Reid with Michael Vick at quarterback in 2010. Vick revived his career in Philadelphia after missing two seasons while serving a prison sentence. He had his best all-around season with Reid.

In 14 seasons in Philadelphia, Reid led the Eagles to six NFC East titles, nine playoff appearances and five conference championship games. He won more games than any coach in franchise history but couldn't win the only one that mattered to Eagles fans.

Still, he played a role in helping Philadelphia get its first Super Bowl title because Pederson, Reid's protege, was the coach who guided the Eagles to that elusive championship two years ago, with backup quarterback Nick Foles beating the Patriots. Reid drafted Foles in the third round in his final season in Philadelphia and persuaded him not to retire in 2016 when he brought him to Kansas City to back up Alex Smith.

Reid was fired by the Eagles after a 4-12 season in 2012, the year his oldest son, Garrett, died from a drug overdose at training camp.

He quickly landed in Kansas City, taking over a 2-14 team, and turned the Chiefs into a winner even faster than he did the Eagles. The Chiefs went 11-5 in Reid's first year.

But Reid was 1-4 in the playoffs with Smith at quarterback in his first five seasons in Kansas City. He drafted Mahomes to take the team to the next level. After making him sit behind Smith for a season, just like McNabb waited in Philadelphia, Reid took a risk. He traded Smith away following consecutive division titles and handed the offense to Mahomes.

All Mahomes did was win the NFL MVP award in his first year as the starter in 2018. The Chiefs fell short at home against New England in the AFC title game last season, dropping Reid to 1-5 in conference championships.

They couldn't be stopped this time.

Led by the dynamic Mahomes, Reid's offense has scored 86 points in two playoff games. The NFL's No. 2 defense awaits. The 49ers allowed 281.8 yards per game in the regular season, second only to the Patriots. They held Minnesota to 10 points last week and Aaron Rodgers and the Packers to 20 points after taking a 27-0 halftime lead.

Reid is 22-5 in his career when he has two weeks to prepare for an opponent, so it'll be an interesting chess match against San Francisco defensive coordinator Robert Saleh.

The only coach who waited longer than Reid for a return trip to the Super Bowl was his friend and former Eagles coach Dick Vermeil. After Philadelphia lost to Oakland in the 1981 Super Bowl, Vermeil led the St. Louis Rams to victory over Tennessee following the 1999 season.

It's Big Red's turn to win the big game.