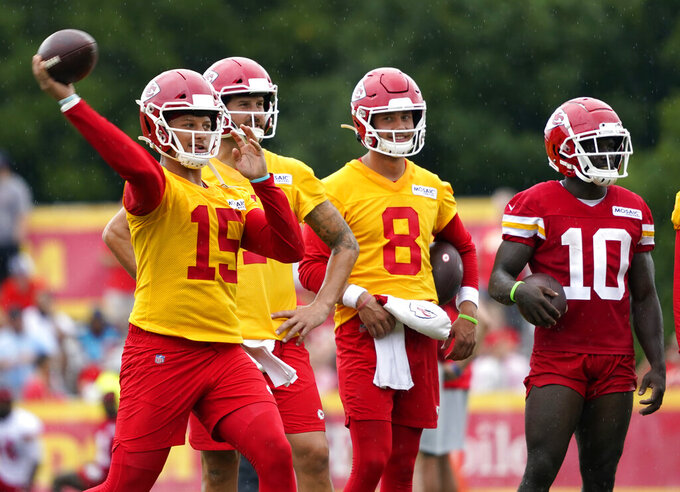 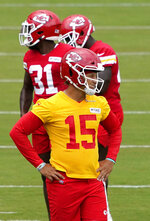 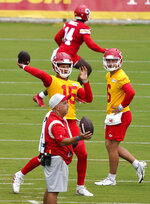 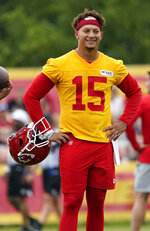 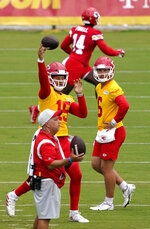 “I think he’s going to be a playmaker,” Mahomes said of the eight-year veteran entering his first season in Kansas City. "I’ve seen it from day one, right when he got in here.”

McKinnon had other options before choosing a one-year deal worth $990,000 with the Chiefs. He likes Kansas City's offensive scheme and the way head coach Andy Reid deploys his running backs.

“I talked to a couple of teams in free agency, maybe like three teams,” McKinnon said. “This was the team that was most intriguing, so I decided to come here. It’s a good character locker room, and they got a lot of good athletes."

Reid seeks more explosiveness from his backfield in 2021, and he believes McKinnon possesses “a knack for the passing game” that meshes well with a backfield led by Clyde Edwards-Helaire and Darrel Williams.

“He’s quick, he’s got that quickness and speed and it’s a good changeup,” Reid said. “You add him into the mix and now you’ve got another variety of running backs that you can present.”

NFL life hasn’t always been easy for McKinnon since entering the league as a backup to Adrian Peterson in Minnesota. In 2018 he signed a four-year, $30 million free-agent deal with San Francisco but tore an ACL prior to Week 1 and spent the campaign on injured reserve. A setback in training camp in 2019 resulted in another lost season on injured reserve.

The love of football, however, kept him grinding through his recovery.

“Two knee surgeries wasn’t easy,” McKinnon said, “but for the most part, going through that stuff, it was my teammates really that I leaned on the most for help and comfort and things like that. Coming in every day on crutches, I look at my teammates go hard, it makes me go that much harder.”

He returned to the field last season for the 49ers, rushing for 319 yards and five touchdowns while adding 33 receptions for 253 yards and a score in the passing game.

“Last year was my first year back and still had to get in the groove again after missing two years, had to get a feel for the game, and then, you know, just getting that in-game experience,” McKinnon said. “Felt good last year but still a learning (experience) coming back off of two years.”

The 29-year-old says he now feels 100% recovered from his injuries. Mahomes sees the acceleration that allowed the former Georgia Southern star to post a 4.41, 40-yard dash time at the NFL combine in 2014, the second-fastest for a running back that year behind De’Anthony Thomas, a former tailback turned wide receiver for the Chiefs.

McKinnon catching the ball out of the backfield has been a constant sight at the club’s training camp during the past week. In the run game, he’s also shown the elusiveness that allowed him to average 4 yards per carry before his two knee surgeries.

“The way he’s able to run the ball, but then catch the ball out of the backfield,” Mahomes said, “I mean, I think he’s a playmaker that will be a big part of our offense.”

“Those guys have been in the system for multiple years,” McKinnon said. “They know what the coaches expect and they know how to do little things, the coaching tips on certain points. Those have been the guys that I’ve been leaning on that have been helping me.”

There’s also much Reid believes McKinnon can impart to his younger counterparts.

“Longevity in this league, the average longevity is like three years, right?” Reid said. “For him to have been in it and doing it this long, he brings great experience.”

The mentality that continues driving McKinnon at this stage of his career also serves as a lesson for his teammates.

“I’m going into year eight, I still feel like I have something to prove,” McKinnon said. “That should be everybody’s mindset. Once you lose that mindset and get complacent, you’ll be out of the league for sure.”

NOTES: TE Travis Kelce practiced a limited role on Saturday after sitting out Friday due to tightness in his back. … LB Anthony Hitchens (hamstring) also worked out in a limited role. … LB Ben Niemann exited practice early due to a tweaked hamstring. Darius Harris and Nick Bolton took additional snaps at middle linebacker in place of Hitchens and Niemann.