Mahomes leads Chiefs to doorstep of playing in Super Bowl 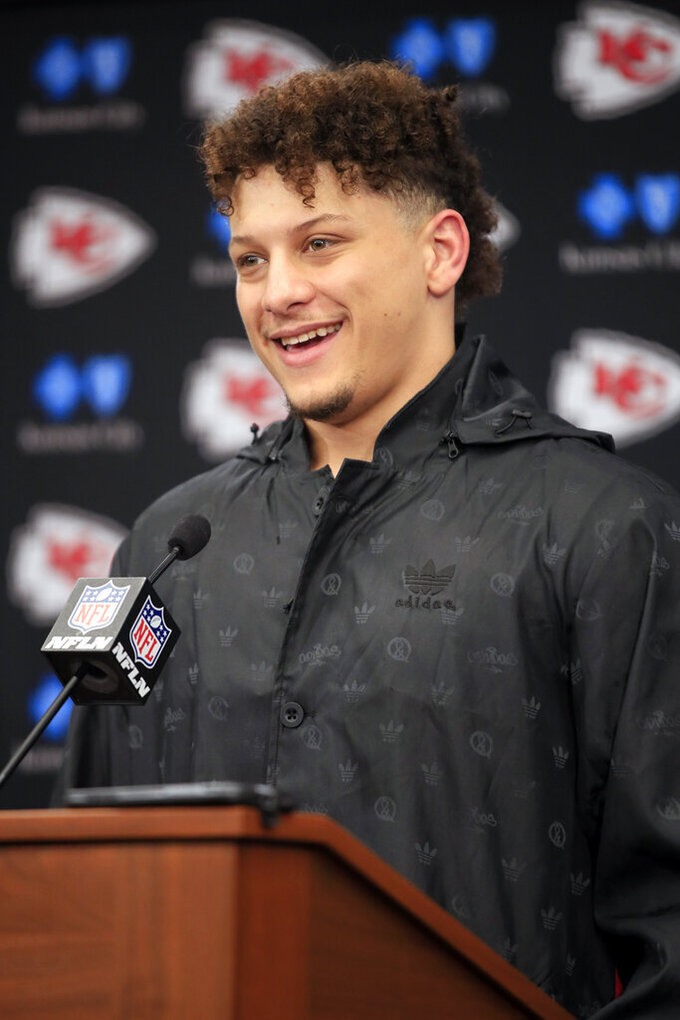 KANSAS CITY, Mo. (AP) — The game was all-but decided, and the Chiefs minutes away from playing in their first AFC title game in 25 years, when they drove to the goal line for a chance to punctuate their long-awaited victory over the Indianapolis Colts with a touchdown.

Patrick Mahomes turned and handed the ball to Darrel Williams, who was stood up right at the goal line. Williams kept churning as the Chiefs began to push him, inch by inch, toward pay dirt.

Mahomes toppled right over the goal line with Williams, then leaped up and threw a knockout right hook at nothing but air, celebrating not only the score but ultimately a 31-13 victory Saturday.

Mahomes wound up throwing for 278 yards in his postseason debut, ran on a hobbled knee for a key touchdown, and did all the dirty work — like that Reggie Bush-style shove — necessary to keep alive the Chiefs' chances of playing in their first Super Bowl since Len Dawson led the way in 1970.

"My favorite thing was finishing the game at the end," Mahomes said of the late touchdown. "We've been in those situations and didn't execute to our standards. It shows the attitude and effort you need to win football games."

Especially in cold, snowy January weather, when the games are most meaningful.

Mahomes answered the call Saturday amid tremendous pressure and great expectations. The Chiefs traded up to pick him 10th overall a couple of years ago, then allowed him to learn the ropes for a year under Alex Smith, before turning him loose on an unsuspecting league.

The young quarterback with the curly Mohawk, massive arm and moxie in spades threw for more than 5,000 yards and 50 touchdowns in the regular season, and shattered just about every franchise passing record. But nobody knew how he would respond to the playoffs, where the Chiefs have given their fans nothing but agony and heartbreak since Joe Montana was taking snaps from center.

All he did was lead Kansas City to touchdowns on its first two possessions to set the tone against a resurgent Colts defense, then lead his team to a field goal and another score before halftime.

The last one was his rushing touchdown, which came after he took a wicked hit in the pocket.

"It was a little cold out there so I was aching for a second," said Mahomes, who no doubt caused heart palpitations across Kansas City when he came up limping. "But it feels fine, it really is. It got me there for a second, a little stinger I guess, but I was feeling pretty good after that."

Mahomes was sacked four times and threw a couple of wobbly passes, and he had an interception wiped away by an offside call, but never made the crucial mistake that could have turned the game.

It helped that his biggest options all showed up.

Damien Williams ran for 129 yards and a score against a Colts defense that had not allowed a 100-yard rusher this season. Travis Kelce had seven catches for 108 yards. Tyreek Hill had 72 yards through the air and ran 36 yards for a score. And wide receiver Sammy Watkins even pitched in for the first time since hurting his foot during a game in November.

"We ran the ball, and that's the biggest thing," Kelce said. "When you have the lead, you've got to be able to run the ball late in the game. Damien Williams, man. He runs his tail off for everybody on this team. Sure enough it showed today that he can finish a game off for us."

Pulling the trigger, though, was the Chiefs' unflappable first-year starter.

"Mahomes was No. 1 in the NFL at drawing people offside. And so we knew that going in," Colts coach Frank Reich said. "We talked about it, and he still got us. For a young guy, the way to work the cadence the way that he does, I give him credit for that."

It wasn't the only reason to heap praise on him Saturday.