Mahomes leads Chiefs to TD in 38-17 win over Bengals 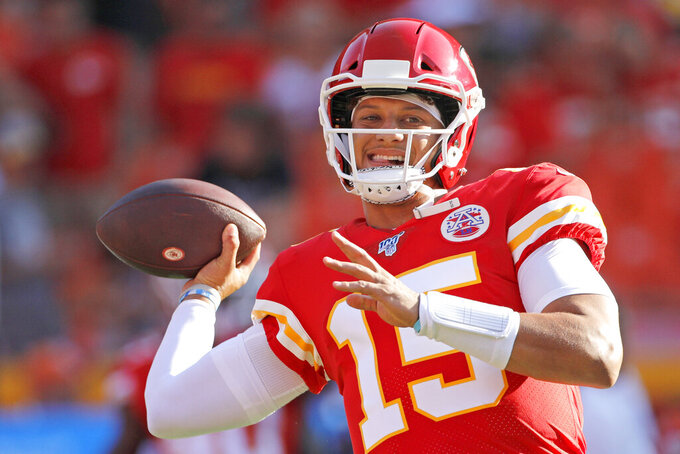 KANSAS CITY, Mo. (AP) — Patrick Mahomes picked up where he left off from his record-breaking debut as a starter, marching the Kansas City Chiefs downfield for a first-quarter touchdown in what became a 38-17 preseason victory over the Cincinnati Bengals on Saturday night.

Mahomes did a bit of everything on the only series by the Chiefs' first-team offense, going 4 for 4 for 66 yards while adding a 10-yard scramble and inducing an an offside penalty.

Andy Dalton was nearly as sharp for Cincinnati, going 7 of 9 for 80 yards while leading his team on a 14-play, 75-yard touchdown march to open the game. Dalton did it without the services of injured wide receiver A.J. Green or his top two running backs, Joe Mixon and Giovani Bernard.

The most interesting thing to happen in the game came late in the first half, when Kyle Shurmur was marching the Chiefs downfield. His throw to Byron Pringle down the sideline was picked by safety Brandon Wilson, scuttling the drive and giving Cincinnati a chance with the ball.

But under a rule change approved by NFL owners in March, pass interference calls can be reviewed — a response to the controversial non-call in the NFC title game last season. And when officials reviewed the play Saturday night, they decided that cornerback Tony Lippett had caused interference. The penalty gave the Chiefs the ball back and they wound up kicking a field goal.

In a delicious coincidence, the provision passed by a 31-1 vote of owners at the league's annual meeting in Phoenix. The only team that voted against the rule was Cincinnati.

SANTA CLARA, Calif. (AP) — Dak Prescott completed all four of his pass attempts, caught one and led Dallas to a field goal in a brief cameo in the exhibition opener as the Cowboys went on to lose to San Francisco.

Prescott and the bulk of the Dallas offensive starters played one series, moving the ball 65 yards in nine plays. The drive stalled when his third-down pass in the red zone was batted at the line by Sheldon Day right back to Prescott, who lost a yard on the play before Brett Maher kicked the first of his three field goals.

Dallas didn't have its entire first-team offense on the field as star running back Ezekiel Elliott remains a contract holdout in search of a new contract. Rookie Tony Pollard got the nod and ran four times for 16 yards on his only drive of the game.

OAKLAND, Calif. (AP) — Nathan Peterman scrambled 50 yards to set up his only touchdown throw and Oakland beat Los Angeles in the preseason opener for both teams.

Peterman entered in the third quarter and completed 9 of 12 passes for 66 yards. He also led both teams with 56 yards rushing.

A starter for Buffalo in Week 1 a year ago, Peterman is competing with Mike Glennon for the backup job to Derek Carr. Glennon, attempting to latch on with his fourth team in four years, started and went 17 of 25 for 200 yards, but threw two interceptions.

Peterman's 3-yard touchdown pass to Keelan Doss on an inside slant came two plays after Peterman was forced out of the pocket on a third-and-4 play from the Oakland 42 and weaved his way through the defense to the 8. The throw to Doss was confirmed after a review.

Both teams held out of a majority of their starters after holding two joint practices at the Raiders' training camp facilities in Napa.

Blake Bortles started for the Rams and played one series in place of Jared Goff. Bortles completed 3 of 8 throws for 50 yards and had a 59.4 rating. Glennon looked good early and threw three straight completions that gained 56 yards on Oakland's opening drive. DeAndre Washington scored on a 7-yard run. Greg Zuerlein made a 36-yard field goal in the first half accounted for the Rams.