Mahomes, other QBs in final 4 share affinity for deep throws 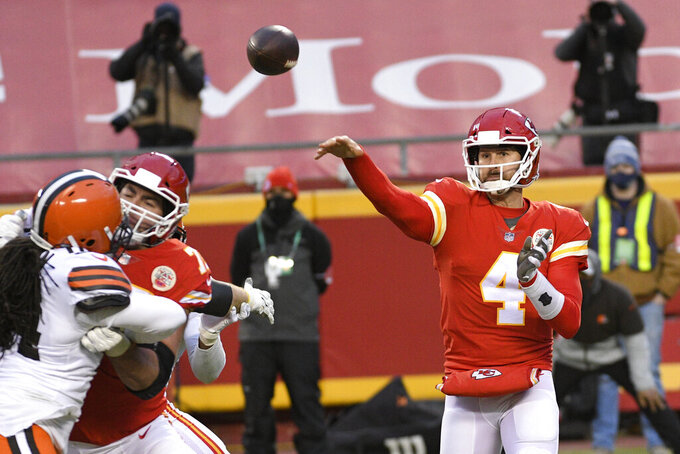 Kansas City Chiefs quarterback Chad Henne throws a pass during the second half of an NFL divisional round football game against the Cleveland Browns, Sunday, Jan. 17, 2021, in Kansas City. The Chiefs won 22-17. (AP Photo/Reed Hoffmann)

Just in case it matters, Chad Henne isn't nearly as likely as Patrick Mahomes to chuck the ball deep down the field for the Kansas City Chiefs.

The sample size is closer than people might think as well.

If Mahomes can't start the AFC championship game against Buffalo because of concussion protocols, Kansas City will be the only team in the final four without a quarterback tending to look downfield for throws.

And if Mahomes is cleared to play Sunday against Josh Allen and the Bills, well, it might be a good week to put defensive backs through plenty of those backpedal-turn-run drills.

“I think I have to focus on the fundamentals for myself,” Mahomes said before the 22-17 divisional-round win over Cleveland last weekend.

“The good thing about this team is we have a lot of great playmakers that can make plays happen in space and so if I’m getting the ball out of my hands and getting it to them, if that’s holding it or stretching plays out and throwing deep passes or getting it out quick, whatever way in order to have success on the field, I’ll try do that.”

Tom Brady's first season with Tampa Bay, after 20 years in New England, marked the highest per-game average of the six-time Super Bowl champion's career for throws of at least 20 yards at 5.9 in the regular season. That number led the NFL.

The opponent for the three-time MVP Brady in the NFC championship game — 2020 MVP contender Aaron Rodgers of Green Bay — is consistently among the league leaders in deep throws and ranked fifth this season.

Henne's career rate of deep throws per game is 2.7 compared to 5.1 for Mahomes. Although it's been seven years since the 35-year-old Henne started regularly in the NFL, the journeyman has similar career numbers in completions and yards to last season's Super Bowl MVP.

With an extraordinary combination of mobility and arm strength, the 25-year-old Mahomes is the prototype for throwing deep in today's NFL and has the numbers to prove it.

Before rallying the Chiefs to a Super Bowl victory over San Francisco, Mahomes led the NFL with a passer rating of 119.1 on throws of at least 20 yards during the 2019 regular season and was the only QB with double-digit touchdowns (12).

After Mahomes left the divisional playoff last weekend, Henne threw one pass of at least 20 yards. It was incomplete. The definitive plays in clinching the victory were Henne's 13-yard scramble to set up a fourth-and-1, and his subsequent 5-yard completion to Tyreek Hill that allowed Kansas City to run out the clock.

With four of the NFL's top 12 in deep throws from the regular season still alive, it's no coincidence that the two fastest qualifying receivers, according to Sportradar's average top speed, are still playing as well.

Green Bay's Marquez Valdes-Scantling (16.6) and Hill (16.3) were the only two to surpass 16 mph among receivers with at least two catches per game in the regular season.

For Valdes-Scantling, the speed translated into leading the NFL at 20.9 yards per catch. Buffalo's Gabriel Davis was fourth at 17.1, and all four remaining teams had at least one receiver in the top 20 in yards per catch.

“I think it’s all predicated on the situation,” Packers coach Matt LaFleur said. “If those looks present themselves, then certainly we have a lot of confidence in Aaron’s ability to push the ball down the field accurately and our guys have been doing a nice job of running precise routes and coming up with big plays.”

Brady's final two seasons with the Patriots were notable for the missing threats at receiver on the outside, and he had his lowest consecutive years of 20-plus-yard throws in almost a decade.

Mike Evans and company with the Buccaneers reserved that trend immediately, which stood to reason with the 43-year-old Brady joining coach Bruce Arians' “no risk it, no biscuit” philosophy after years of emphasis on a shorter passing game that utilized running backs.

There were some bumps along the way, but Tampa Bay ended up second in the NFL in passing behind Mahomes and the Chiefs.

“We knew we were a work in progress,” offensive coordinator Byron Leftwich said. “We still are.”

Buffalo's Allen knows a little something about progress. The third-year pro's attempts on deep balls have gone down from 5.4 as a rookie to 4.2. But Allen's completions on those throws have nearly doubled.

Where Allen was forcing deep passes while completing barely 50% of his throws overall with a passer rating of 67.9 two years ago, the 24-year-old almost hit a 70% completion rate this regular season. His 107.2 passer rating was fourth in the NFL, with Rodgers and Mahomes among the three above him.

Buffalo's offseason trade for Stefon Diggs was a big boost for Allen, with Diggs earning his first All-Pro nod after leading the league in catches (127) and yards receiving (1,535).

“Ultimately, what we tell our wideouts and our skill players is your main job is to get open and catch the ball,” offensive coordinator Brian Daboll said. “The quarterback’s main job is to make a good decision and throw it accurately and on time.”

With or without Mahomes among the final four quarterbacks, there's a decent chance that throw will be well down the field.