Mahomes piles up big numbers at Arrowhead - on Election Day 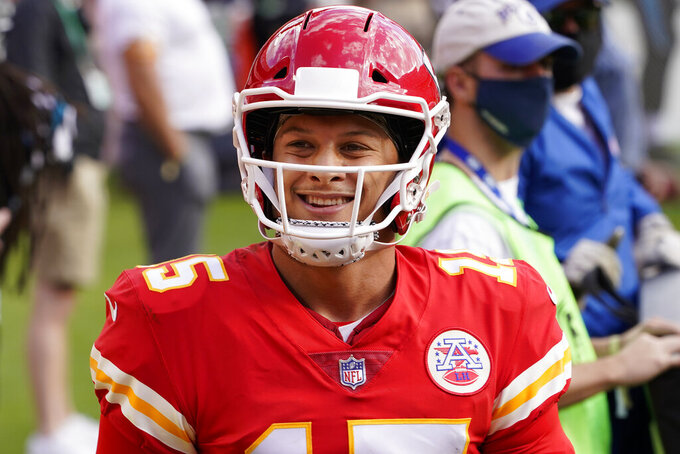 Five days before throwing for four touchdowns and nearly 400 yards in the Kansas City Chiefs’ 33-31 victory over the Carolina Panthers, Mahomes helped turn his home stadium into a giant polling place on Election Day.

When Missouri couldn’t figure out a way to pay for a polling station at Arrowhead Stadium, the Chiefs and their star quarterback chipped in the six figures necessary to cover the cost of 40 voting machines and other necessities that allowed Jackson County residents to vote there.

“I thought it was very important. Not only just to get as many people out to vote as possible, but also to use a place (such) as Arrowhead where we have a lot of fun, show a lot of love and unity with people coming together, and use it as a place where we can come together to vote and use our voice,” Mahomes told the “ Huddle & Flow ” podcast with Jim Trotter and Steve Wyche.

Chiefs president Mark Donovan and head coach Andy Reid were among the first to vote at Arrowhead on Tuesday.

Mahomes, who filled out an absentee ballot from Texas, said he voted for the first time in his life, as did Denver Broncos star linebacker Von Miller, who is recovering from ankle surgery.

Miller went on Instagram Live on the eve of the election to tell Sen. Cory Booker (D.-New Jersey) that he decided to cast his ballot after a heart-to-heart conversation with Broncos running backs coach Curtis Modkins.

“I just wanted to let my voice be heard,” Miller told Booker. “We’ve been fighting for the right to vote for years and years and one of my coaches, Coach Modkins, he sat down with us and we had a team meeting and we talked about how important it is to vote no matter who is on the ballot.

The NFL and its players union announced last week that following their joint efforts through NFL Votes and #AthleteAndVoter nonpartisan initiatives, 90% of active players were registered to vote in this year’s election and half the league’s stadiums were used as early voting or Election Day polling sites.

Among the other notable calls of Week 9 were a ruling by the officials that helped turn the tide in the Baltimore Ravens’ 24-10 win at Indianapolis and NFL receiver-turned-broadcaster Brandon Stokley calling out several Denver Broncos players for complaining about getting booed at home a week earlier.

With the Colts clinging to a 10-7 lead early in the third quarter, Philip Rivers’ deep pass to Marcus Johnson was broken up by cornerback Marcus Peters. Only, the officials ruled Peters made an interception at midfield before fumbling the ball, which safety Chuck Clark smothered at the Baltimore 46.

Ten plays later, the Ravens went ahead for good when running back Gus Edwards took it in from the 1 to put them up 14-10.

Rivers was still miffed after the game at how the replay officials could have ruled it an interception and fumble instead of a simple pass breakup.

“It’s gotten so jacked up how the catch rule is,” Rivers said. “I mean, nobody that’s played any amount of football or that’s been around the game ... thought that was a catch — including the guy that dropped it. But you can slow it down to milliseconds and you just make it a technicality.”

Baltimore’s first win in Indianapolis helped extend its league-high road winning streak to 10 and ended a stretch of 20 consecutive losses when trailing at halftime.

Before Denver’s 31-30 comeback win over the Chargers last week, fans at Empower Field booed the players off the field at halftime and again when Los Angeles extended its lead to 24-3 midway through the third quarter.

Among the Broncos who took offense to the catcalls from the sparse crowd of 5,231 in the 76,000-seat stadium were Drew Lock and Dalton Risner, who were visibly upset by the boo-birds, and Phillip Lindsay, who said afterward, "It’s hard to go out there and play for negative fans.”

Coach Vic Fangio didn’t like hearing the griping, saying paying customers have the right to voice their displeasure when the product is less than worthy of the price of a ticket.

“That’s just part of pro sports,” Fangio said. “Sometimes it’s harsher than others — me and my Philadelphia roots know all about that. I think it’s better left alone. The fans pay the money, they can boo if they want.”

Stokley, who has an afternoon show with Zach Bye on 104.3 The Fan in Denver, agreed wholeheartedly with Fangio’s take.

“If players don’t like fans booing them then how about just play better. It’s pretty simple,” Stokley tweeted. “Don’t be mad at paying customers when the product stinks and they are upset about what they’re watching. It’s been 3 1/2 years of bad ball. Not just one half.”