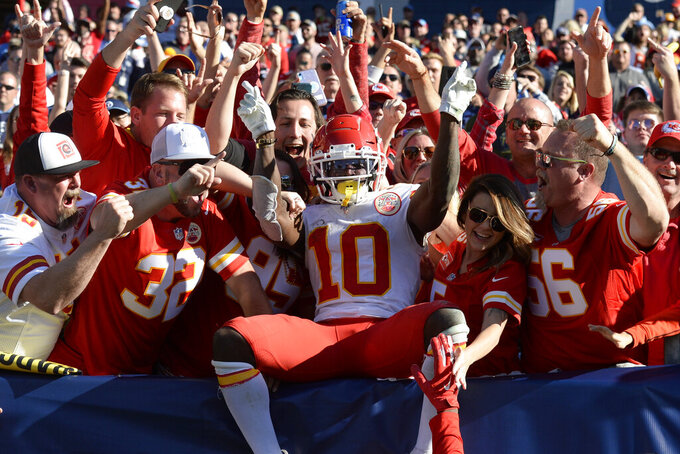 Kansas City Chiefs wide receiver Tyreek Hill (10) celebrates with fans after scoring a touchdown against the Tennessee Titans in the second half of an NFL football game Sunday, Nov. 10, 2019, in Nashville, Tenn. (AP Photo/Mark Zaleski)

NASHVILLE, Tenn. (AP) — The reigning NFL MVP is back and healthy as ever for the Kansas City Chiefs.

Now Patrick Mahomes and his teammates have some room for improvement.

Mahomes threw for a season-high 446 yards with three touchdowns, but the Chiefs hurt themselves with too many penalties and settled for too many field goal attempts that wound up costing Kansas City in a 35-32 loss to the Tennessee Titans on Sunday.

"We were in position to close it, and we didn't get that done," Reid said. "My responsibility. Then we were too sloppy. You come down and play like we did, again, head coach's responsibility. You can't do it like that."

The Chiefs (6-4) now have lost two of three overall. They also lost their fourth straight to Tennessee with Reid 1-8 in his coaching career against the Titans.

Kansas City piled up nine penalties for 80 yards, five for 50 in the first quarter including an offensive pass interference by Tyreek Hill that wiped out a 16-yard TD pass from Mahomes to Travis Kelce. That would've put the Chiefs up 14-0. Instead, they settled for the first of four made field goals on six attempts by Harrison Butker.

"We need to make plays when it counts, including myself," said Hill, who finished with 11 catches for 157 yards and a touchdown. "I don't point fingers at anybody. We're an offense, we're a unit, and we're in this together so it's all of us."

The Chiefs outgained Tennessee 530-371 and held the ball for nearly 38 minutes.

They also gave up 188 yards rushing and two touchdown runs to Derrick Henry, missed an extra point and had more injuries on the offensive line. Right tackle Mitchell Schwartz's consecutive snap streak ended at 7,894 with a knee injury, though he returned. Martinas Rankin, starting at right guard, hurt his right knee and was carted off the field.

Mahomes escaped an interception on his opening throw thanks to replay review showing the ball hit the ground, and the highlight from this loss will be his jump pass in a collapsing pocket to rookie Mecole Hardman who finished off a 63-yard touchdown for a 29-20 lead with 11:54 left.

"He did some good things," Reid said of Mahomes. "He came out healthy. He'll tell you the same thing. We've all got to do a little bit better, but I was happy with the things that he did for the most part."

Mahomes said his right knee, which he dislocated Oct. 17, felt fine. So did the ankle that had been hurting him before the knee injury.

"We obviously hurt ourselves with penalties in the first half," Mahomes said.

After taking the 29-20 lead, the Chiefs had plenty of chances to pad their margin except they couldn't find the end zone and were forced to attempt three field goals in the final 3:19. Butker, who beat the Vikings last week with a winning field goal, made a 39-yarder for a 32-27 lead.

Then came the communication issues on the snap on the second where holder Dustin Colquitt tried to chuck the ball away.

"I looked back, Dustin was looking forward, then I started to see him look back, but I had already started the snap," snapper James Winchester said.

With 3 seconds left, Reid was forced to send Butker out for a 52-yard attempt to force overtime. Titans cornerback Joshua Kalu raced around from Butker's right and got his left hand on the ball for the block.

"I have no idea what happened on that last one," Winchester said.