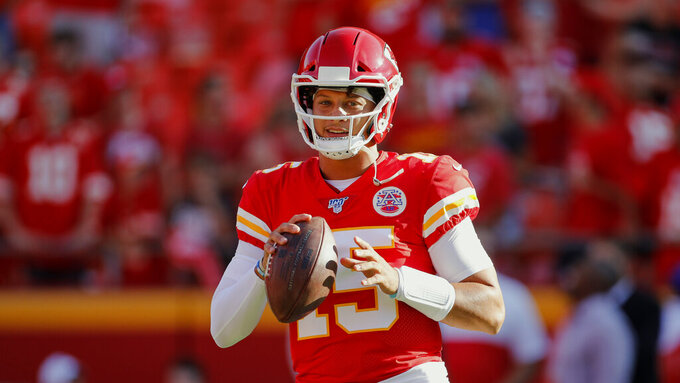 ST. JOSEPH, Mo. (AP) — Patrick Mahomes dropped back to pass early in the Kansas City Chiefs' preseason opener against Cincinnati and, feeling the pressure of the pass rush collapsing the pocket around him, wisely stepped forward and then bolted to the right.

The young star quarterback made a nifty move at the five-yard line to make one would-be tackler miss, then cut back again to see two more defenders converging near the goal line.

The brash, brave thing to do would have been for Mahomes to dive for the end zone.

Instead he slid safely just short of it.

It wound up being a relatively forgettable play in the grand scheme of things — the Chiefs punched in for the touchdown two plays later. But it nevertheless showed the growth and maturity of the reigning league MVP in just his second full season as the Chiefs' starting quarterback.

"I was just kind of scrambling out, trying to find someone open and I kind of cut back and saw the end zone and I knew there was a good chance I could've gotten in there," Mahomes said later, "but he was coming down hill pretty fast, so I decided to save it for the regular season."

It was a split-second decision that showed Mahomes' understanding of time and place. The first series of the first preseason game is hardly a situation to take chances, especially when Kansas City has expectations of winning not only a fourth straight AFC West title but making a Super Bowl run.

No doubt Chiefs coach Andy Reid was holding his breath when Mahomes scampered toward the Bengals sideline, and certainly no doubt he was pleased to see his quarterback get to the ground.

Even if Mahomes did wait until the last second.

"He didn't say anything to me," Mahomes said. "I mean, he knows it's a smart decision you make during the preseason. In the season I would probably go for it, but right now I'll keep sliding."

When asked how the slide made Reid feel, he replied: "That's why you take him out of the game."

It wound up being the only series that Mahomes played on Saturday night, but it certainly was an effective one. He started off laying a perfect pass down the sideline into the arms of tight end Travis Kelce for a 36-yard gain, then connected with Sammy Watkins underneath before finding emerging backup tight end Blake Bell down the seam for a 23-yard connection.

Mahomes, so often compared to Reid protege Brett Favre, even channeled one of the former Packers quarterback's innate skills by using his cadence to draw the Bengals defense offside.

The only contact he endured all night was a little shove at the end of a play.

"You want to get that first hit. It kind of settles you in," Mahomes said. "Hopefully, it is not a big one. I got a nice little push and fell down, but it kind of got me back in the swing of things so I was kind of glad I got that one and stayed relatively clean after that."

Adding to his enjoyment? Mahomes got to spend most of the night watching a bevy of talented young skill players for Kansas City, many of whom will have a chance to help him out in the regular season.

Mecole Hardman, the Chiefs' second-round pick in April, caught a pair of passes and took one of them for a touchdown. Rookie running back Darwin Thompson also made a couple of nice plays, rushing five times for 22 yards and reaching the end zone on a 29-yard catch-and-run.

Throw in Kelce, Watkins and Tyreek Hill and Mahomes has an abundance of riches.

"It's all about them understanding the offense. The talent is there," Mahomes said. "You see them go out there and they make special plays and we want them to understand exactly what to do each and every single day, and they are sort of picking it up faster and faster as it goes on.

"When you get guys like that," he added, "that learn and that are in their playbooks and have that much talent, those are the special players in this league."

That goes for learning when to slide, too.

NOTES: CB Morris Claiborne, who signed late last week, practiced for the first time Monday. Reid said he does not expect Claiborne to play in the Chiefs' preseason game Saturday in Pittsburgh. ... CB D'Montre Wade (bruised knee) did not practice. ... RB Damien Williams worked with the first-team offense after sitting out the preseason game. Williams has missed much of camp with a hamstring injury.