Mahomes in teams' heads and they play right into his hands 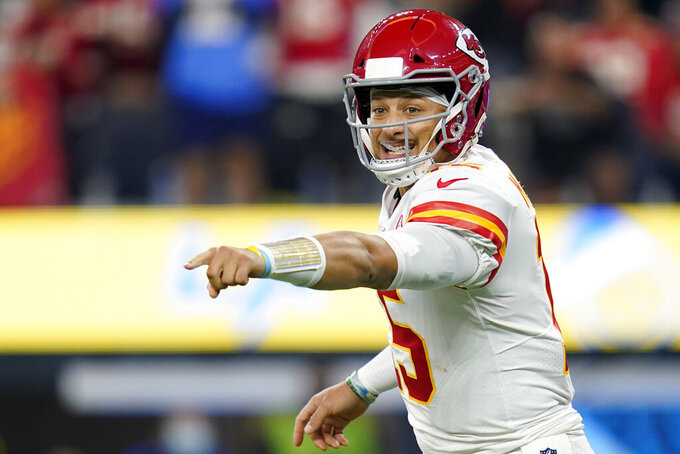 DENVER (AP) — Patrick Mahomes is getting into his opponents' heads, and they're playing right into his hands.

The Kansas City Chiefs are on a roll again thanks to division foes getting spooked by Mahomes the way opponents used to wig out when facing a young Peyton Manning.

The Chiefs are riding a seven-game winning streak after a 3-4 start and have surged into the pole position in the logjammed AFC playoff chase as they jockey for their third trip to the Super Bowl in four years.

They can thank their AFC West rivals in Denver and Los Angeles for their helping hand.

Both the Broncos and Chargers were hell-bent on scoring touchdowns instead of field goals so they could keep up with Mahomes, Travis Kelce, Tyreek Hill, et. al.

These rivals who believe they have absolutely no margin for error when facing the Chiefs are playing right into Mahomes' hands by frittering away golden scoring opportunities.

In the leadup to the Broncos' trip to Kansas City on Dec, 5, Denver quarterback Teddy Bridgewater was asked about what lessons he had learned from his 33-31 loss at Arrowhead Stadium last year while he was with the Carolina Panthers.

“They didn’t punt until the fourth quarter. They had one punt that game," Bridgewater recounted. "When you play a team like this, you have to get 7s. You have to score seven. Three isn’t enough. That’s one of the things that stood out.”

That was exactly the thinking employed by Broncos coach Vic Fangio and his embattled offensive coordinator Pat Shurmur that day in Kansas City. The Broncos lost 22-9 despite holding Hill and Kelce to fewer than 50 combined yards and limiting Mahomes to 15-of-29 passing for a mere 184 yards with no touchdowns and an interception.

During an epic drive in the second quarter, the Broncos did exactly what they had set out to do, chewing up yards and clock, dinking and dunking their way downfield while keeping Mahomes and his high-octane offensive teammates cooling their cleats on the Kansas City sideline.

Trailing 10-3, the Broncos took over at their own 3 with 12:16 left in the second quarter. Eleven runs and eight passes later, they found themselves facing fourth-and-2 from the Kansas City 8.

Instead of taking the points, they went for it and rookie running back Javonte Williams was dropped for a 1-yard loss.

Fangio said he only had a fleeting thought of settling for the field goal that would have cut Denver’s deficit to 10-6 with a minute left until halftime.

“There was, but very little. I am comfortable with that decision,” Fangio said after the game. “We had converted a couple of fourth downs to keep it going. One was fourth-and-7, I believe. You guys just got done grilling me about the points. You have to score touchdowns to beat this team.”

The next day, Fangio was still adamant, saying going for it on fourth down was one of his easiest decisions in that game.

Yes, the analytics say to go for it almost every time, and almost always that's the right thing to do. But in that moment, the Broncos brain trust miscalculated the psychological cost of coming up empty on the gamble — and the big boost it would give the Chiefs.

“When you’re in a situation where you get the ball really backed up then take the ball all the way down the field and you don’t score, it just sucks, man," Bridgewater said.

When they stuffed Williams, the rejuvenated Chiefs defenders whooped and hollered their way off the field.

They did the same thing Thursday night in a 34-28 overtime win at SoFi Stadium in Los Angeles when the Chargers failed to punch the ball into the end zone on the game's opening drive and again on the final play of the first half.

Justin Herbert's fourth-and-goal pass from the 5-yard line on the Chargers' opening possession was dropped when tight end Donald Parham suffered a concussion hitting the ground, then Herbert threw incomplete to wide receiver Keenan Allen on fourth-and-goal from the 1 on the final play of the first half.

The Chiefs celebrated on their way to the locker room while the Chargers trudged off the field even though they led 14-10 at the break.

Chargers coach Brandon Staley is a defensive disciple of Fangio, and he made the same psychological blunder by shying away from a precious three points in favor of gambling for seven because when he looked across the field he saw Mahomes staring back.

It's reminiscent of how teams that faced Manning frequently fell victim to their own forced errors.

Even Bill Belichick, who's won seven Super Bowl rings as a head coach and a record eight overall, famously fell under the spell cast by Archie Manning’s kid back in 2009.

With two minutes left in their game, the Patriots led the Colts 34-28, but they were backed up at their 28 and needed two yards for a first down. Belichick chose to go for it on fourth down rather than put the ball back in Manning’s hands.

Kevin Faulk caught Tom Brady’s pass but was driven backward by Melvin Bullitt. When the chain gang went in to measure it, the ball was short of the first down.

The Colts went on to win the AFC championship that year and faced New Orleans in the Super Bowl, where Sean Payton's onside gamble paid off with an upset of Manning & Co.

Just like Manning used to do, Mahomes is getting into his opponents' heads. And just like the Colts seemed to always do, the Chiefs toyed with other teams early this season before getting down to business.

Would anyone be surprised to see them get back to the Super Bowl — with a little help from their friends?