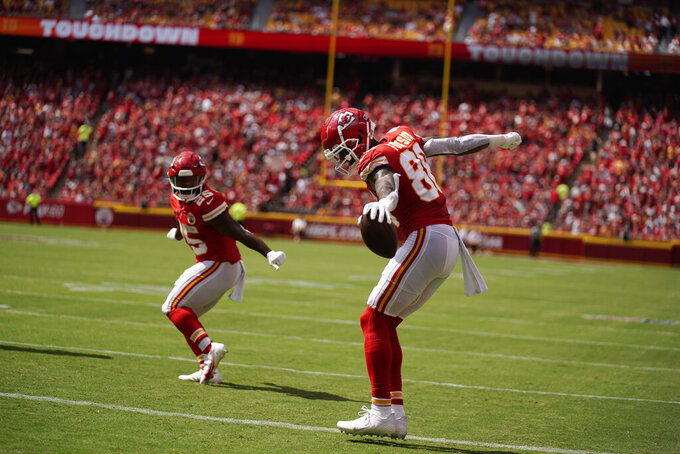 Mahomes finished 12 of 19 for 162 yards. In two preseason games, Mahomes has played three series and has led three touchdown drives. He was 6 of 7 for 60 yards and a touchdown in the first preseason game in Chicago.

“I thought our execution was pretty good there,” Chiefs coach Andy Reid said. “The first play (was designed for Fortson). The second one, Pat was moving around and found him.”

“It’s good to have Jody back. He’s a good football player who had a tough injury against this team last year.”

Fortson, who is listed as the fourth-string tight end on the depth chart, tied for the team lead on the Chiefs with four receptions, most coming in the first half. The Chiefs use multiple tight-end sets, and Fortson could earn a spot on the 53-man roster.

“I think you’ve seen what Jody is,” Mahomes said. “When he’s one on one and he has a guy behind him, you can give him that chance. I have that trust with him now. He wasn’t necessarily open, but when you have a big guy who can make those physical, tough catches, you give him a chance.”

Fortson is glad to be part of the mix after suffering a season-ending Achilles injury last October.

“It’s a blessing,” he said. “I’m just honored to be here. The support system of the athletic trainers and the coaches have never let me get down. It feels awesome to get out here and play in front of these fans.”

He has five career regular-season receptions, including two touchdowns, all coming last season. But with his 6-4, 226-pound frame, he looks like he may be a short-yardage option for Mahomes.

“I thought it was OK," Wentz said. “I definitely left some plays out there, definitely wish we could’ve sustained some drives a little bit more. That’s the biggest thing, the biggest takeaway for me, early. Especially those third downs, there’s a couple that I wish I could have back.”

The Commanders went 0 for 3 on third downs with Wentz in the game — with all three leading to punts.

“Carson got the ball to the 40s a couple of times and we didn’t get points out of it because we made a negative play,” coach Ron Rivera said. “We had a third-and-5 and a third-and-10 and then take a sack. We can’t do that to ourselves.”

The Chiefs' starting defense has not allowed a point in the first two exhibition games.

“The guys are playing fast,” Reid said. “We’re short a couple of guys (defensive tackle Chris Jones and defensive end Frank Clark), so we had some younger guys in. They got some good experience.

“I like what I’m seeing. We’ve got to keep getting better, but I do like the speed.”

Harrison Butker missed on his only long-range attempt (from 53 yards), but he showed the strength in his right leg during warmups. He hit one from 63 yards with plenty of room to spare. He then hit comfortably from 69 yards and from 74 yards on his next two tries.

Butker has said during training camp that he felt he could be successful from 70 yards in a game. He has a career long of 58 yards and is 20 of 28 from beyond 50 yards.

Chiefs: Cornerback Rashad Fenton left in the second quarter with a groin injury.

Commanders: Face the Ravens in Baltimore on Saturday.