Make it 2 in a row - takeaways help Dolphins' turnaround 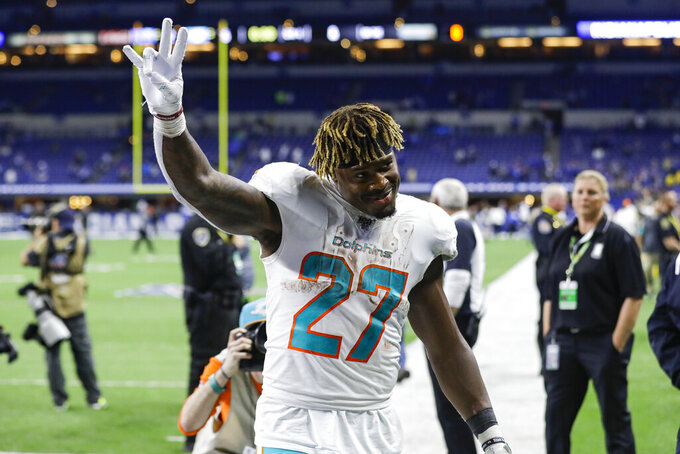 Miami Dolphins running back Kalen Ballage (27) waves to fans as he leaves the field following the team's NFL football game against the Indianapolis Colts in Indianapolis, Sunday, Nov. 10, 2019. The Dolphins defeated the Colts 16-12. (AP Photo/Darron Cummings)

The Dolphins had by far the NFL's worst turnover differential two weeks ago, when they were 0-7. But they've been on the plus side each of the past two games, and now can bask in the league's most improbable winning streak.

Three interceptions Sunday helped Miami rally on the road to upset Indianapolis, 16-12. Yes, the picks came against Brian Hoyer, but they were still impressive considering the Dolphins totaled one interception in their first seven games.

To the distress of many Miami fans, the Dolphins hurt their chances of landing the No. 1 pick in next year's draft. But Flores doesn't want to wait to create a winning culture in his first season.

"Culture is something you build over time," he said. "It's early, but I do think we're moving in the right direction."

Miami will try to make it three wins in a row Sunday against the Buffalo Bills. The Dolphins are six-point underdogs at home, but they were underdogs the past two weeks as well.

As the Dolphins trend toward mediocrity, the most dramatic improvement has been on defense, with takeaways only part of the story.

A month into the season, the Dolphins ranked last in the league in points allowed (41 per game) and yards allowed (472). They were on pace to set league records in both categories.

It's a unit stripped of veteran talent by the franchise's rebuilding project and more recently depleted by injuries.

"A lot of ups and downs, but this team is really growing," safety Steven Parker said. "I love that."

The Dolphins netted 229 yards, their lowest total since September, and the ground game remains the NFL's worst.

Kalen Ballage had a career-high 20 carries at Indy but totaled just 43 yards, and he's averaging 2.1 yards per carry this year.

The Dolphins have reached the 100-yard rushing mark only once this season, and they're on pace to set teams records for the fewest yards rushing and lowest per-carry average.

The Dolphins went into Sunday's game without the three best defensive backs on their Week 1 roster, but several young replacements have emerged as potential keepers. Parker, a waiver acquisition after spending last year on the Rams' practice squad, and undrafted rookie Nik Needham each had an interception and played well.

"It just felt good to contribute to the old guys," Needham said.

For the second week in a row, Miami's chances of landing a franchise quarterback in 2020 took a hit.

Team owner Stephen Ross attended Saturday's showdown between Alabama's Tua Tagovailoa and Louisiana State's Joe Burrow, but the Dolphins might not get a shot at either.

"It's not something I really think about," Flores said. "I think about this team. My job is to put this team in the best position to try to win games."

The Bengals (0-9) are now front-runners for the No. 1 pick. Miami is one of four teams with two wins.

Linebacker Jerome Baker briefly came out of the game with a knee injury but returned and isn't expected to miss practice time.

Quarterback Ryan Fitzpatrick was annoyed that he was belatedly summoned for a mandatory concussion test in the fourth quarter. As a result, he missed three plays when the Dolphins were threatening, and they settled for a field goal.

The hit that raised concerns had occurred during Miami's previous possession. Fitzpatrick said he could have been examined while the Colts had the ball.

"There was a five-minute gap where I was sitting there doing nothing and they didn't need me on the field, where I could have been checked," Fitzpatrick said. "The timing of it was off, and that was difficult for me to understand."

Minus 12 — the Dolphins' scoring differential in the past five games. In the first four games it was minus 137.

The Dolphins have a chance to show how much they've improved when they face the Bills. Miami gave up 22 points in the fourth quarter in Week 7 and lost at Buffalo, 31-21.