Making playoffs is the expectation for Washington Commanders 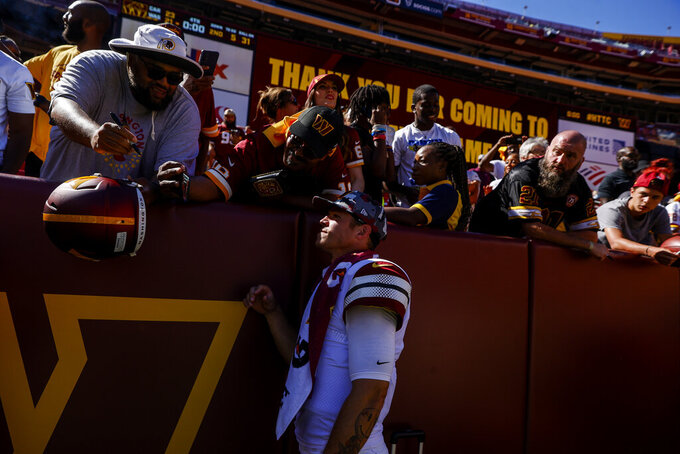 Washington Commanders quarterback Taylor Heinicke (4) takes pictures with fans after a NFL Preseason football game between the Carolina Panthers and the Washington Commanders on Saturday, Aug. 13, 2022 at FedExField in Landover, Md. (Shaban Athuman/Richmond Times-Dispatch via AP)

ASHBURN, Va. (AP) — Going into his third season coaching Washington, Ron Rivera has drawn plenty of parallels between the same timeframe he had with Carolina, which resulted in a playoff appearance.

The expectation is for Washington to do the same in the team's first season known as the Commanders, even if Rivera stopped short of saying it's fair to declare 2021 “playoffs or bust."

“It’s fair to say we expect to win,” he said. "The biggest thing, more so anything else, is why put pressure on ourselves? Why don’t we just leave it at winning? And we’ll go from there.”

Winning more games than they lose would be a start: Washington by different names has not done that since 2016, and that's only happened four times in 22 years. Not far removed from winning an uncharacteristically weak NFC East at 7-9 in 2020, now is the time for Rivera's group to become a legitimate contender and make the postseason.

Nearly everything the team did this offseason points to that goal.

It started with acquiring Carson Wentz from Indianapolis to be the unquestioned starting quarterback and continued into the draft when Washington selected a handful of prospects who are more NFL-ready than others available with potentially higher long-term potential.

Similarly, Wentz — on his third team in as many seasons and trying to recapture some strong play early on in his career with Philadelphia — understands the situation he and the Commanders face, even while he tries not to dwell on it.

“You have these long-term goals, but then you can’t look too much at the future or look too much ahead because you've got to do what’s required of you at that moment,” Wentz said. “We know where we want to go. We know the expectations. That’s understood."

That journey started in offseason workouts, when Wentz didn't have Terry McLaurin to throw to because the wide receiver was waiting out a new contract. Now that that's done, they've had training camp to get acquainted before the regular season starts Sept. 11 against the lowly Jacksonville Jaguars.

Team president Jason Wright acknowledged Washington's last-place schedule makes it more of a challenge to sell tickets for home games but hopes it translates to more success on the field. That's a reversal of last season, when expectations were high coming off a division title but a murderer's row of opponents combined with injuries and the defense's regression led to a 7-10 finish.

Anything close to that this time around would put Rivera's job in jeopardy. A winning season with a trip to the playoffs would keep them on an upward track — and could help wrap up a deal for a new stadium down the line.

Very few if anyone around the Commanders now expect to be part of the team by the time a new stadium opens in 2027 or beyond, and the focus is to win now.

“You can’t worry about the playoffs, even though that is the main goal,” defensive captain Jonathan Allen said. "You continue to grind and focus on the task at hand.”

After eight different quarterbacks cycled through over the past three seasons, Wentz is undoubtedly the guy in Washington after Rivera and general manager Martin Mayhew made the move to trade for him in March.

With that comes confidence, even after a rough ending to Wentz's time with the Colts. The second pick in 2016, Wentz is now 29 and going into his seventh season. Drawing on experience, he brushes off the sudden shifts in his career over the past few years.

“I feel confident in myself," he said. "I feel belief in myself from the people around me, which means a lot.”

Washington's defense ranked second in the NFL in 2020 but didn't live up to expectations last year. This time around, Rivera and coordinator Jack Del Rio have tried to instill more humility in players. The coaching staff's hope is continuity with almost every starter returning helps get the unit back to the top tier in the league.

It'll take overcoming not having 2020 Defensive Rookie of the Year Chase Young for at least the first four games and making up for a lack of veteran linebackers, but the talent is there — perhaps also the right mentality.

“We can have a good year this year, but that doesn’t mean we’re not gonna have some down times to where we’re going to have to fight ourselves out a hole," cornerback Kendall Fuller said. “That just comes with football. That’s a part of the game. That’s why you love it.”

Given previous starter Antonio Gibson's fumbling and durability problems, rookie Brian Robinson Jr. could be Washington's feature back for much of the season. The third-round pick out of Alabama impressed in training camp practices and preseason games and could help Wentz open up the offense by providing a mix-up on the ground.

“He takes a lot of pride in being a physical runner, but he can run too,” offensive coordinator Scott Turner said. “I was happy and impressed with him the way that he ran some things. He wasn’t perfect on his tracks and stuff like that, but he runs so hard.”