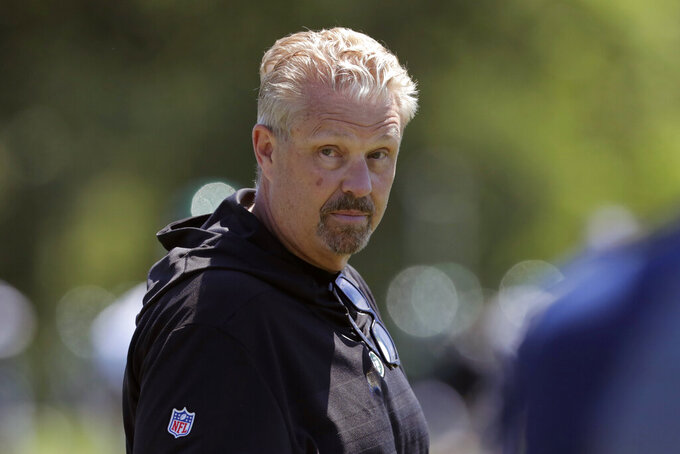 FILE - In this June 4, 2019, file photo, New York Jets defensive coordinator Gregg Williams looks on as his players run drills at the team's NFL football training facility in Florham Park, N.J. Gregg Williams has been described in many ways during his 30-year NFL coaching career _ several flattering, and others not exactly appropriate for young ears. But there's one adjective used by most anyone you ask, love him or hate him. Intense. (AP Photo/Julio Cortez, File)

FLORHAM PARK, N.J. (AP) — Gregg Williams has been described in many ways during his 30-year NFL coaching career — several flattering, and others not exactly appropriate for young ears.

But there's one adjective used by most anyone you ask, love him or hate him.

That's how Williams goes about his business, and the New York Jets defensive coordinator expects his players to do the same.

Decked out in his dark Jets shirt and pants in the scorching summer heat, Williams is the Jets' man in black.

It's visually fitting for a guy known for devising aggressive defenses — and for being at the center of the New Orleans Saints' Bountygate scandal seven years ago for which he was suspended a season.

"I told him the first time I met him: 'You're a pain in the ass to game plan for, so it's nice to have you in the same locker room and meeting room as me,'" Jets offensive line coach Frank Pollack said with a big grin.

Williams is an intimidating presence with his menacing scowls, incessant shouting on the field and tendency to call out players right in front of teammates.

The 61-year-old coach certainly knows how to make his point.

"Well, it's been that way my whole life, and it's say what I mean, and mean what I say," he said. "You can't B.S. players. ... The thing that is easily convinced when you go to a new place is find the best guy there and make him do it. And, everybody else says, 'Uh oh.' Yep, uh oh. Mom and Dad didn't make you do that stuff. Mom and Dad couldn't play, either."

Williams wants mentally tough players because of the pounding the game takes every week — physically and mentally.

That's why he insists on having them run after every loose ball, even if it's clear it's an incomplete pass. That's why he'll get on even the most experienced of guys when they drop a sure-thing interception or miss an assignment. He's big on "caused penalties," whether it be a false start or a holding call drawn by the defense, and other plays that don't appear on normal postgame stats sheets such as caused sacks and interceptions.

"Otherwise, I tease them all the time," Williams said, "I could just throw a highway cone out there and let that guy get in the way."

No matter what it is, Williams wants winners.

"There has been a smile on my face since I walked in here," said Williams, who spent the past two years in Cleveland. "These young men want to compete, whether it's an argument, whether they're playing chess or checkers in the room, anything. They want to compete, and they want to know that I'm there to pull them back if they go too far. That's what I'm supposed to be doing.

"But, if they won't do that, we've got the wrong people, OK? And, you can't win at this level without that kind of competition."

Williams has his work cut out for him at one position in particular: cornerback. Top starter Trumaine Johnson is "week to week" with a hamstring injury, the same thing ailing Kyron Brown, an undrafted rookie who was having a solid summer. Derrick Jones and Jeremy Clark have already been cut, and the starters at the moment are Darryl Roberts, mostly a career backup, and Arthur Maulet, who couldn't stick with Indianapolis or New Orleans the past two years.

Pro Bowl safety Jamal Adams has even offered to play the position if needed.

"He could do it," Williams said. "There's no doubt about it. He's a good enough athlete to do that. We haven't even crossed that bridge with him because he's learning other positions, too."

While Jets fans and the media scan the depth chart and wonder how they'll manage, Williams refuses to sweat it. He subscribes to a "next-man up" approach that sounds like a bunch of coach-speak, but Williams truly believes in it.

Williams has been thinking that way since he served as an assistant with the then-Houston Oilers, working as a linebackers coach. When the Jets got started in the offseason, every player on defense needed to learn their position inside and out. Then, Williams makes it mandatory to learn a second position. Some have already advanced to a third spot on the field.

He has seen it work, and points to the success New England coach Bill Belichick has had plugging guys into spots in what others deem to be dire situations.

Williams did it himself on football's biggest stage, moving safety Usama Young over to cornerback when Randall Gay was injured in the first quarter of New Orleans' Super Bowl win over Indianapolis in 2010.

"They take great pride in being the next man up," Williams said. "When they prove that to other teammates, their stock in the locker room goes up because the other teammates say, 'Hey, I can trust you.'

"And, that's the whole thing: respect and trust is earned."