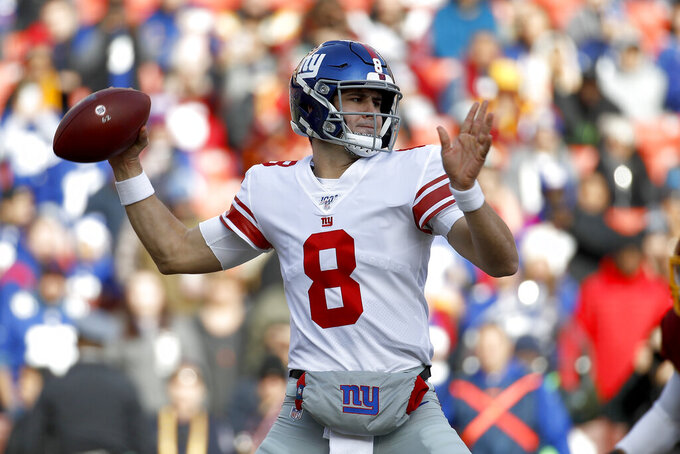 New York Giants quarterback Daniel Jones looks to pass against the Washington Redskins during the first half of an NFL football game, Sunday, Dec. 22, 2019, in Landover, Md. (AP Photo/Patrick Semansky)

EAST RUTHERFORD, N.J. (AP) — A couple of wins has the New York Giants in the holiday spirit. Or, is that spirits?

Quarterbacks Eli Manning and Daniel Jones and a couple of teammates had a little fun at a northern New Jersey bar Sunday night, hours after the Giants beat the Washington Redskins 41-35 for their second straight victory.

Jones provided the impetus for the win, throwing five touchdown pass in his return after missing two games with a sprained ankle. Manning threw two touchdowns last week in a 36-20 win over the Dolphins in what was probably his last start at home. His contract runs out after this season, his 16th with team.

A video of the two playing flip cup, a drinking game, and enjoying the evening went viral Monday. The 38-year-old Manning even threw napkins while dancing.

Running back Saquon Barkley said the get-together was team bonding.

“It’s New York, so people are going to overreact to everything," Barkley said. “We’re grown men, you can go out and have a drink or two if you want. You can do that. Nowadays there are cameras everywhere, so you have to be a lot smarter and aware of your surroundings. You got to see Eli Manning out there, I guess, flipping the cup or whatever. I think it’s pretty (cool) if you ask me.''

Barkley added it also showed a human side of Manning, who rarely always himself to be seen having a good time.

“They’re grown men and they look after each other," Shurmur said. “They were celebrating a victory. They should have invited me."