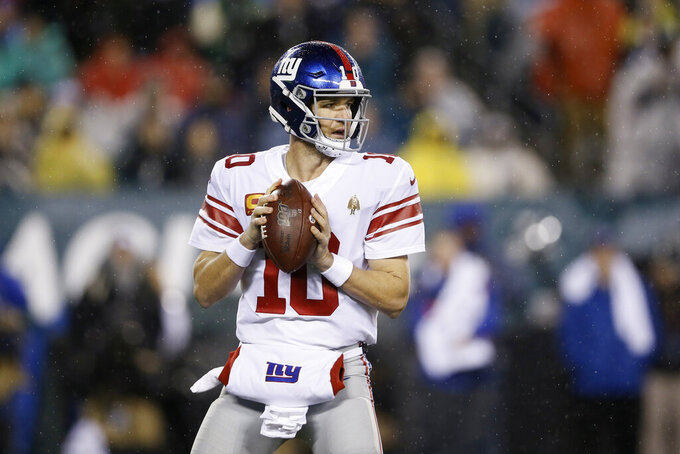 New York Giants' Eli Manning plays during the first half of an NFL football game against the Philadelphia Eagles, Monday, Dec. 9, 2019, in Philadelphia. (AP Photo/Michael Perez)

EAST RUTHERFORD, N.J. (AP) — The best feel-good story of a disastrous season for the New York Giants came to a disappointing and frustrating ending.

What did you expect from a team sporting a 2-11 record, including a franchise record-tying nine-game losing streak?

The Giants have found ways to lose games this season and the 23-17 overtime loss to the Eagles in Philadelphia on Monday night was just the latest example.

For 30 minutes, two-time Super Bowl MVP Eli Manning had revived moments of his glory days and seemed to be putting an exclamation point on a 16-year career by throwing two touchdown passes to help New York build a 17-3 lead over the rival Eagles in his return to the role as the starting quarterback.

The 38-year-old got the job when rookie successor Daniel Jones sprained his right ankle in a loss to the Green Bay Packers in Week 13.

With his wife, Abby, and brother, Peyton, looking on, Manning was nearly flawless in his first start since Sept. 15. He made the right calls and right plays.

A second-half rally by the Eagles changed those feelings and left the team with questions to answer at the end of the month. The big one will be what has to change. Does coach Pat Shurmur stay despite a 7-22 record with a young team. What about general manager Dave Gettleman, who has had mixed success with free agency, highlighted by the struggles of left tackle Nate Solder.

The end of the month should be interesting.

The 30-minute game plan. The Giants have found a way to play one decent half almost every game. It was the first half on Monday. Manning threw two touchdowns and the defense made Carson Wentz look like a struggling quarterback in taking a 14-point lead

Unfortunately, the game is usually 60 minutes long. The Giants have had one game (Washington) where they put in a full day's work this season.

The other 30 minutes. The offense gained 29 yards in the second half when the Eagles played more zone in the secondary. Shurmur insists the Giants had chances but did not make the plays to stay on the field.

The defense looked lost at times. Players kept turning to each other as if they were not sure where they were supposed to be on certain calls.

What made things worse was the Eagles were short on receivers after Alshon Jeffery left the game in the first half, leaving Zach Ertz has the only viable option for quarterback Carson Wentz. Instead of taking him out of the game, the Giants saw the tight end catch nine passes for 91 yards and two touchdowns. He was left all alone on the game-winner in overtime.

Darius Slayton. The fifth-round draft pick from Auburn is having a big rookie season with 42 catches for 659 yards and seven touchdowns. The yardage and TD catches are team highs. The wide receiver had his third two-touchdown game Monday night, catching five passes for a career-high 154 yards. His touchdowns covered 35 and 55 yards.

Sam Beal. The first-year cornerback got his first start in his fourth game overall and had seven tackles. It wasn't a bad effort until the game-tying final drive when he made two mistakes. The first was an illegal contract on Greg Ward on a third-and-10 from the Eagles 15. The second was a hold on a third-and 4 from the Philadelphia 37. J.J. Arcego-Whiteside still caught the pass for 22 yards.

Jones is making progress with the ankle he sprained a week ago. Shurmur wants to see how he looks Wednesday before deciding on his playing status. ... G Kevin Zeitler sprained an ankle in the second half and his status is uncertain. ... TEs Evan Engram (foot) and Rhett Ellison (concussion) remain week to week.

Wait for the end of the season and clean up the mess again. The coaching staff has had two years to make progress and it's hard to see it now. Thirteen games into the season, the defense is still blowing coverages and leaving receivers wide open, such as Ertz on the game-winning touchdown in overtime. The improved O-line can't run the ball with one of the NFL's top backs in Saquon Barkley. Youth can no longer be used as an excuse.