From marching bands to The Boss to Lady Gaga at halftime 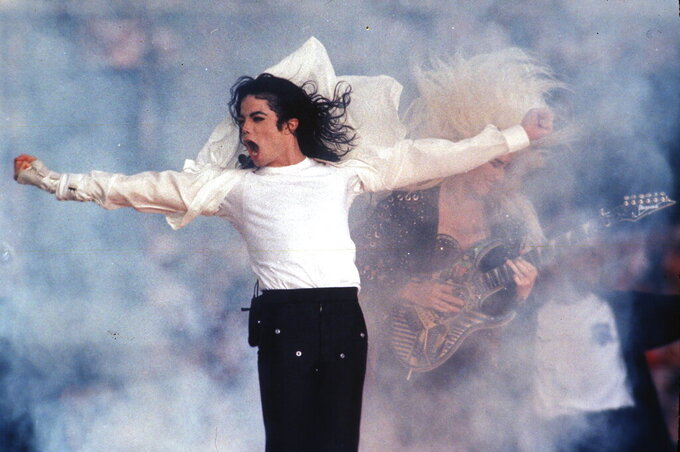 FILE - This Feb. 1, 1993 file photo shows Pop superstar Michael Jackson performing during the halftime show at the Super Bowl in Pasadena, Calif. Regardless of your musical tastes, it seems the Super Bowl halftime show has gone there. From the sublime (Tony Bennett) to the ridiculous ( Janet Jackson's ``uncovering''), and from Michael Jackson's moonwalks to U2's majestic remembrance of the 911 victims, the halftime presentations have drawn nearly as much attention as the NFL championship game itself. (AP Photo/Rusty Kennedy, File)

MIAMI (AP) — Regardless of your musical tastes, it seems the Super Bowl halftime show has gone there.

From marching bands to New Orleans jazz, from Latin and Caribbean vibes to Motown. From classic rock to country, pop to hip hop and rap.

From the sublime (Tony Bennett) to the ridiculous (Janet Jackson's “uncovering”), and from Michael Jackson's moonwalks to U2's majestic remembrance of the 9/11 victims, the halftime presentations have drawn nearly as much attention as the NFL championship game itself.

It's certain to do so again on Feb. 2 when Jennifer Lopez and Shakira headline.

“You kind of tune in to the Super Bowl to be surprised,” says Peter O'Reilly, the NFL's senior vice president of events, “in terms of what can happen, whether it's the renditions of the national anthem and `America The Beautiful,' the pregame, halftime. ... Ultimately game day is about moments, creating moments that pull people together and that they talk about forever.”

Those moments range from Bono opening his jacket in New Orleans as the names of the 9/11 victims were displayed in the Superdome to Lady Gaga coming down from the roof of the stadium in Houston. From the Stones and The Boss rocking ballparks to Bruno Mars making not one, but two star turns.

“They are kind of creating those signature moments people remember," O'Reilly said, “that kind of add and build on what is the power of the Super Bowl as an unofficial national holiday.”

Entertainers don't necessarily have to be football fans to strive to get the gig. Mick and Keith prefer the English kind of football to the NFL's version. Justin Timberlake sponsors a PGA Tour event and fundraiser.

What these acts unquestionably recognize is the massive audience — and spotlight — at their command for about 12 minutes. Maroon 5, which headlined last year's halftime show, tuned up for it by appearing at the Pro Football Hall of Fame's induction concert the previous August.

So artists are eager to perform, even though they don't get paid; the NFL does handle all production costs and expenses for the acts, with Jay-Z's Roc Nation now involved. Adam Levine certainly isn't the first singer to campaign for the job he and his band got last February in Atlanta.

"Ever since I saw Diana Ross fly off into the sky at the halftime show, I dreamed of performing at the Super Bowl," Lopez said when introduced as the co-headliner this year. “And now it's made even more special not only because it's the NFL's 100th season, but also because I am performing with a fellow Latina. I can't wait to show what us girls can do on the world's biggest stage.”

Now, the emphasis is on, well, megastars regardless of genre.

“At its core, the Super Bowl draws such a broad audience,” says Mark Quenzel, the league's senior vice president of programming and productions. "It really is that opportunity for the intersection of sports and entertainment to bring these two together in a way interesting to a lot of fans. That also makes it a challenge. Who is going to do the show that is the most interesting to 200 million people?

“The Super Bowl is the biggest single-day sporting event and it deserves that kind of entertainment.”

So while there are such musical giants as Taylor Swift, Garth Brooks, Kendrick Lamar and Metallica who have not done the show — yet — the NFL hasn't exactly been missing the mark in the last decade with the likes of Timberlake, Beyonce, Madonna, Lady Gaga, Katy Perry and Red Hot Chili Peppers.

"I love my job," Bruce Springsteen said in 2019 when he brought the E Street Band to Tampa. “We come out and inspire; that's part of what we do. If they throw the money at us, then we keep that, too. But we do come out to inspire. And it was just like, 'Well, this is the year.'”

Perhaps the most difficult part of putting together the concert is not booking a big name. The NFL usually has determined who it will approach months before the regular season begins; league planners have been looking at the 2021 Tampa Super Bowl for several months.

Rather, it's the logistics of staging the show without slowing down the teams heading into the second half; not damaging the field; keeping the massive audience entertained; and satisfying the entertainers' needs.

“We work with the artists an amazing amount of time,” Quenzel says. "We want them to do a show they are comfortable with. A show the majority of the 200 million people watching will know the songs they are singing. And we know the level of artists we are talking about, most people have seen them in some shape or form doing a performance. We are not introducing these artists to the audience.

“We want them doing what the audiences have never seen before. These performances are driven by the artists. Our job is to pull it all together — in 12 minutes, by the way.”