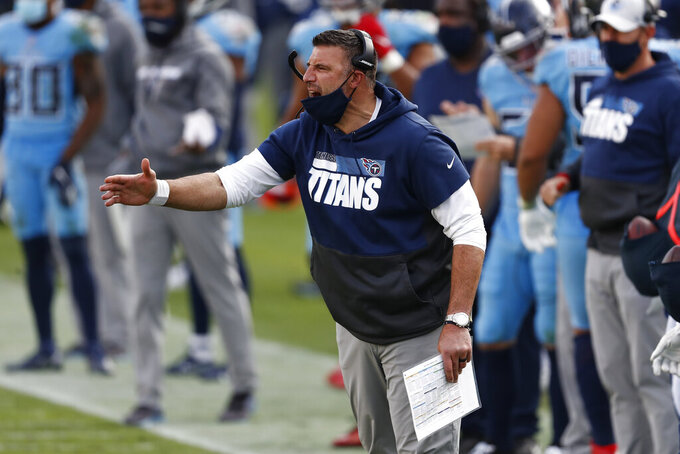 Tennessee Titans head coach Mike Vrabel yells during the second half of an NFL football game between the Titans and the Cleveland Browns Sunday, Dec. 6, 2020, in Nashville, Tenn. (AP Photo/Wade Payne)

NASHVILLE, Tenn. (AP) — The Tennessee Titans have lost their margin for error chasing the franchise's first AFC South title since 2008.

Their slow start in losing 41-35 to Cleveland dropped them into a tie with Indianapolis, though Tennessee (8-4) still has the divisional tiebreaker with a 3-1 record.

Luckily, they visit Jacksonville (1-11) on Sunday, one of the three teams currently with losing records in the four games on the Titans' schedule.

First, the Titans have plenty of corrections to make to a game in which they fell behind by 17 points, and only a late score made it seem much closer than it really was.

This was the fourth time the Titans didn't score a point in the first quarter, and right tackle Dennis Kelly said they have to be more consistent starting games.

“We can’t have this up and down,” Kelly said. “We can’t wait to get a punch in the mouth, like (coach Mike) Vrabel said, to respond. We need to respond right out the gate.”

Derrick Henry, who remains the NFL rushing leader despite having only 60 yards in the loss, said the Titans have to be better.

“That’s definitely not how we want to play our style of football, and it’s unacceptable how we played,” Henry said.

Well, the offense when it's working. The Titans managed only one touchdown while being blown out 38-7 in the first half by Cleveland. But they outscored the Browns 28-3 in the second half, bumping the Titans up to the NFL's third-best scoring offense, averaging 29.9 points a game.

Defense, defense, defense. When the offense struggles, the defense has not been able to buy the Titans any time to work through any issues. Worse, the Titans' weaknesses become much easier to exploit with the lack of pass rush unless blitzing, and the inability to cover receivers close enough to break up passes.

Corey Davis. The Titans declined the fifth-year option on the No. 5 pick overall in the 2017 draft, wanting to see more from the wide receiver. Davis just turned in the best game of his career with 11 catches on 12 targets for 182 yards, and he also had a touchdown catch.

Davis now has had four 100-yard receiving games this season after having only two combined over the past three seasons. He leads the Titans with 53 catches for 801 yards and is averaging 15.1 yards per catch.

Picking someone from the defense would be easy. But Wilson was the No. 29 pick overall by Tennessee, and the Titans have lost a pair of tackles to season-ending injuries. Not only has Wilson not developed enough to play, the Titans suspended him for the game against the Browns.

Vrabel said the Titans will keep supporting the rookie while making it clear that means holding him accountable. Vrabel said they will see where Wilson is after the suspension. Wilson was added back to the active roster Monday.

3 — A team that had the fewest turnovers in the NFL with just five through the first 11 games had three. Even Derrick Henry struggled, losing his first fumble of the season.

Head to Jacksonville and try to beat the Jaguars for the eighth straight time in this divisional rivalry. Then it's back home to host Detroit (5-7), visit Green Bay (9-3) before wrapping up the regular season in Houston (4-8).