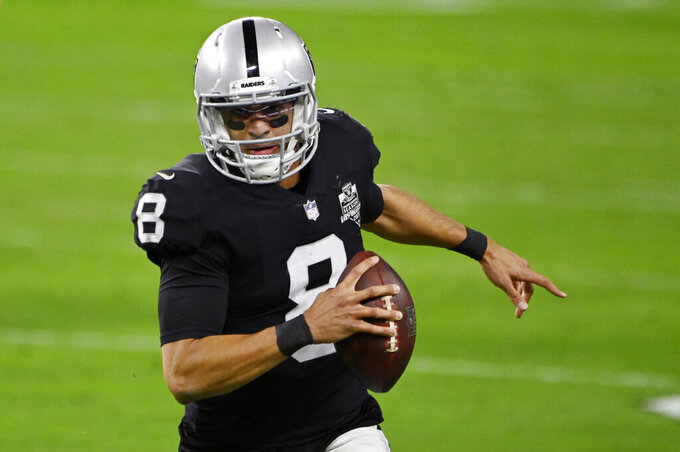 Marcus Mariota agreed to take a pay cut on Tuesday to remain as backup quarterback for a second season for the Las Vegas Raiders.

Mariota had been due to be paid $10.5 million in the second year of his contract with the team after making $7.5 million last year. The Raiders were unwilling to pay that much for Mariota to be Derek Carr’s backup and reached agreement to bring him back on a cheaper deal.

NFL Network reported that Mariota will be paid $3.5 million this season with a chance to increase the deal to $8 million with incentives.

“At the end of the day, we’re very blessed to play this game for a living,” Mariota told KHO-TV from his home state of Hawaii. “A lot of us make a really good amount of money. For me, I just love playing the game. The excitement, the opportunity to be a Raider kind of overcame all of that.”

The 27-year-old Mariota was the second overall pick by Tennessee in the 2015 draft but lost his starting job with the Titans to Ryan Tannehill midway through the 2019 season.

He then signed with the Raiders last offseason but only ended up playing in one game. He was slowed in training camp by a pectoral injury that forced him to go on injured reserve early in the season.

He returned to the active roster in October and got his only action in Week 15 against the Chargers after Carr left with a groin injury in the first quarter.

Mariota fared well in relief, going 17 for 28 for 226 yards, one touchdown and one interception. He also ran nine times for 88 yards and a score but the Raiders lost the game 30-27 in overtime.

Carr returned the next week and played the final two games of the season. Now Mariota has returned as the backup with Nathan Peterman once again slated to be third string.

Mariota made a big splash with four touchdown passes in his NFL debut in 2015 but never developed into the star the Titans hoped they were getting when they drafted him.

He lost his job six games into the 2019 season. He completed a career-low 59.4% of his passes that season with seven TDs, two interceptions and a 92.3 rating.