Mariota's starting spot in flux after benching vs Broncos 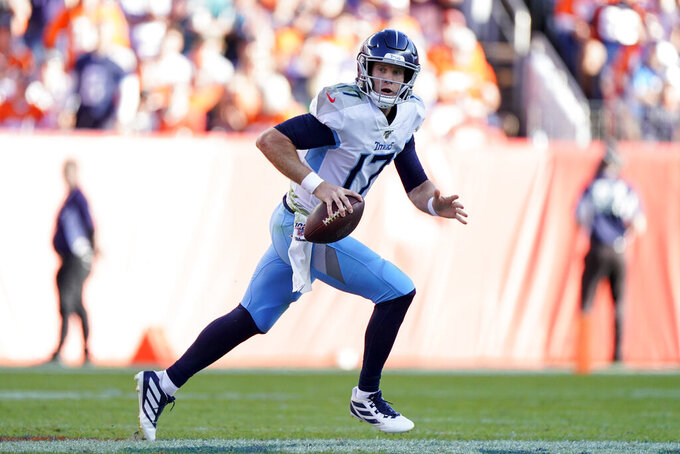 Tennessee Titans quarterback Ryan Tannehill scrambles during the second half of an NFL football game against the Denver Broncos, Sunday, Oct. 13, 2019, in Denver. (AP Photo/Jack Dempsey)

Now, his starting spot is in limbo.

The Tennessee Titans quarterback got the hook in the third quarter for his ragged play during a 16-0 loss to the Denver Broncos on Sunday. Backup Ryan Tannehill took over in the game — and perhaps going forward.

Not that Titans coach Mike Vrabel was willing to address that in the aftermath of a game in which his offense had nearly as many punts (nine) as first downs (12).

"I'll let you know as soon as I figure it out," Vrabel said.

It was a confounding afternoon for Mariota, whose stat line wasn't pretty: 7 of 18 for 63 yards passing. A 9.5 passer rating. Two picks. Sacked three times.

"I didn't give our guys a chance to make plays," said Mariota, the No. 2 pick overall in the 2015 draft. "Obviously, that's some of the reasons why I got pulled."

Tannehill took over with 4:56 left in the third and the Titans trailing 13-0. They were searching for some sort of spark from Tannehill, who was acquired in a trade with Miami in March as an insurance policy in case Mariota got hurt again.

The veteran Tannehill only produced two first downs until his final drive. He finished 13 of 16 for 144 yards and one interception. He was sacked four times as the Broncos completed their first shutout since December 2017.

With Mariota running the show, the Titans (2-4) managed just six first downs and 88 total yards. A week earlier, they scored just once in a loss to Buffalo.

"We're not pulling our weight as an offense," Mariota said. "We have to find a way to improve and change that because our defense is playing lights out."

Vrabel said Mariota wasn't happy about the benching, but "he took it like a pro. ... I don't think any of us were happy. When we lose, nobody's happy."

Mariota offered Tannehill some advice before he stepped in.

"Trust what you see and go play," Mariota recounted.

So that's what the former Dolphins starter tried to do. But that's a difficult task against Von Miller and Co., who earned their first shutout in two years.

"I thought the ball was coming out good. I felt my locations were good," Tannehill said. "Definitely felt like it had been a while since I'd played. But I thought I was able to settle in and find some open guys."

Tannehill said he's spoken with Mariota and there's nothing but mutual respect.

"We have a great relationship," Tannehill said. "These things are tough no matter how you cut it. I think the only thing that makes it somewhat tolerable is that we do have a good relationship and we have a ton of respect for each other."

Asked if he was hoping this was a one-week deal and he'd be in there against the Los Angeles Chargers next week, Mariota said: "For me as a competitor, I would love to be out there with my guys. But again it's going to come down to the coaches and what they decide."

Pressed if this was his team, Mariota responded: "Absolutely. Absolutely. No matter what, I'm a team player. If they call my number, I'll be ready to go and I'll make the most of the opportunity."